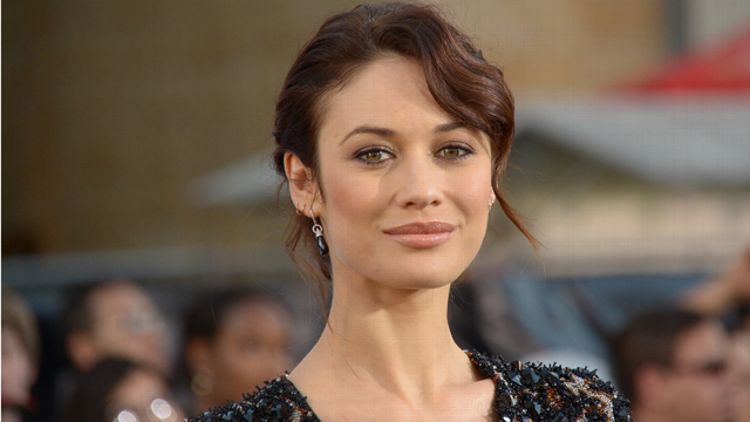 Pretty much the one thing I remember from Quantum of Solace (which is, let’s be honest, by far the most forgettable Daniel Craig Bond film) is Ukrainian model/actress Olga Kurylenko striding across the desert in a designer ball gown. Seeing as roughly 80 percent of Bond girls are as interchangeable as men’s magazine covers, I consider that a noteworthy accomplishment. Since then Kurylenko has continued to battle Bond-ian fungibility with eclectic credits in films like hyperkinetic writer/director Martin McDonagh’s Seven Psychopaths and Mitch Glazer’s show about the good ol’ days of Cuban crony capitalism, Magic City. This summer, Kurylenko stars in two films that, if not for her, would never even be mentioned in the same breath: Terrence Malick’s latest art house/spiritual experience, To the Wonder with Ben Affleck, and the sci-fi mega-movie Oblivion with Tom Cruise.

That’s not so much eclectic as paradoxical, but paradoxical sure can be fun. I chatted with her about twirling through Malick’s latest film, Cruise’s incomparable running abilities, and the one thing that a big Hollywood blockbuster and a Malick movie have in common. Read on below!

I’m curious, when you’re a Bond girl do you get a commemorative gift, like a pin or a T-shirt that says, “I slept with James Bond and All I Got Was This Lousy T-Shirt?”

You know what I got, I got the dress! The black dress in which I fell out of the plane. I still have it hanging in my closet. I don’t know what I’ll do with it, but it’s a cool memory to keep. I should try to do that on all movies.

Exactly, that’s what’s annoying! It’s like, “Until it comes out, we can’t give it to you.” But once it comes out, you’ve forgotten about it. Speaking of clothes, I would love to keep the tracksuit from Oblivion. That was fun to walk around in.

Click here for all of our interviews with fascinating people from the worlds of sports and pop culture.
Actually, I found it kind of hot. It’s like a gray NASA astronaut suit. But of course they “beautified it,” let’s put it that way. But it’s based on real suits astronauts wear. Of course, they made it perfect for my body. But it was comfortable, I must say.

Most people don’t realize one of the suckiest parts of acting is you often have to spend all day in stifling costumes in the world’s hottest places, drenched in sweat.

Oh my God, I know! And we were shooting in Louisiana …

I can’t imagine enduring that humidity in an astronaut suit.

And when we went to Iceland, and it was freezing cold, I had to be in a tank top, of course!

Well, what’s the point of an action film if not to torture the actors a little?

Exactly. But I’d do it 10 more times for [Oblivion]. I’m so happy I did that. It’s a good one. The script was just so sharp and the story so well-written, which is the basis of every movie. [Laughing.] Which is funny because we didn’t have any script with Malick [To the Wonder]. But his movies are also so deep and full of philosophical meanings and messages. I guess we could talk a lot comparing the two, huh?

They’re pretty much polar opposites. I mean, is there anything at all a big, sci-fi Tom Cruise action movie has in common with To the Wonder?

Believe me, I saw that film: You run/dance/cavort pretty much nonstop.

I run so much! I was exhausted; I would be like, Can I sit down? The thing is, on Oblivion I had a trailer, there were breaks, and pauses when they reset the lights. On Malick, they never reset. Literally, nobody had a trailer: You leave the house in the morning with a camera on your shoulder and there you go! Then you walk until you drop; then, night comes and you can’t shoot anymore, so everybody goes to sleep. The next morning, same thing. You never sit, there’s never light resetting because the light is mostly natural. It’s outside, and you’re constantly moving and acting. In a way, it’s more intense than Oblivion because it’s not just about learning one scene. It’s being in the scenes from morning to evening, switching one moment to another, one feeling to another, trying again. It’s basically all the time, nonstop. You don’t know what Malick is going to come up with and ask you to do. Some days, it’s like, “OK, now you’re going to fight and break down, [go]!” He probably asked me that every single day, so I had to be in this raw place every day, suffering!

Wow, so making a Malick film is a better workout than Oblivion?

It’s a constant workout, but on Oblivion, I did work out with a coach, which is the first time I enjoyed training. I don’t really like working out, but the guys who work with Tom, whatever the program is called, they’re amazing. They’re in Santa Monica … I should know the name, but they’re amazing, those guys!

If anyone knows how to run, it’s Tom Cruise.

I know! There was a moment a stuntman tried to outrun him and Tom ran faster: You can’t outrun Tom Cruise. He’s faster than any stuntman, and those guys are tops! They do amazing stuff. He’s faster, stronger. It’s impressive.

After I saw Tree of Life, I thought, Terrence Malick must go around all day staring at trees and flowers and existence, and just saying to himself, “Holy shit, that’s amazing.” Is that true?

Absolutely, he does! He’ll be like, “Oh my God, look, look at the bird! Film the bird, film the bird!” And you see Chivo [Emmanuel Lubezki] taking off, running with the camera. Whenever the birds or some branch or leaves are shaking in the wind, you’ll be sure the camera has left you already and is filming that. He loves nature. One of the first descriptions I received about Marina, my character — which was all I knew when I went to the audition — was that this woman loves nature and children. I guess I showed my love to children and nature so much without saying anything, that’s how I got that part. [Laughs.] I just had to be silent and look at the camera and make them feel that I love nature.

That’s how you win Terrence Malick.

That’s how you win Terrence Malick!

By now, I feel like Malick has the poetic, rhapsodizing nature-and-all-existence thing down pat. And, sure, he can do it with dramatic Icelandic landscapes, cosmic wide shots, and soaring French cathedrals in his sleep. But what’s really impressive in this film, when you think about it, is that he does the exact same thing with suburban Oklahoma.

The way he filmed Oklahoma is absolutely breathtaking. But he knows how to film nature, for sure — and the feelings of nature. In fact, in his movies, nature is another actor, whether it’s the sky, the leaf, the flower, the wind, the lake, a puddle. It’s funny, he can film a tree and it will almost talk to you. Only he can do that.

Next time you talk to him, can you give him a challenge from me? Tell him that if he can make waiting in rush-hour traffic on a Los Angeles freeway lyrical, poetic, and rhapsodically ecstatic, I will eat my shoe.

I will tell him!

By the way, I hear Morgan Freeman has a lovely singing voice; Antoine Fuqua told us he loved to sing on the set of Olympus Has Fallen.

That’s funny. I think he did hum. I don’t think he was loudly singing but that rings a bell. I know that Tom sang. I was like, “Oh my God!”

Yeah, because he had just done Rock of Ages and, oh my God, he can sing! I’d never imagined that. I was like, “Dude, you should record a CD.”

Who knew? OK, because I’m a huge Malick fan, I have to know: Is a Terrence Malick set at all like what you’d imagine it to be? I.e., there’s no script and he walks around set reading poetry and philosophy out loud all day?

He doesn’t read the poetry, but he gave pages of it that I read. Mostly French and Russian. First of all for preparation, I had to read three big Russian novels, Anna Karenina, The Brothers Karamazov, and The Idiot. So that was my “script,” I guess.

Yeah, I had to get inspired by all those female characters. Then on set, every morning we had pages, 10 or 15, I would quickly read them while I was in hair and makeup. They were the scenes of the day, and there would be poems! In the voice-over he had me read all those poems a lot. After the movie, for a year I recorded voice-over. I probably read 300 pages of text, at least.

That’s exactly what I thought working for Terrence Malick would be like.

Yeah! You wake up and you read those poems and they’re all deep and philosophical, and you’re good to go. I call it food for the soul. You have it for breakfast in the morning and you’re set. It’s not about, “Here’s the dialogue, learn it by heart.” If you make him feel those 11 pages, that’s the goal. To portray it with your eyes, your body, your being — and he shoots until he feels like he got it. I really enjoyed it! I mean, if he told me, “Come on my next movie, I’ll cut you out, you’re not going to be in it,” I would do it just for the experience.

You’re clearly not alone! Anyway, in closing, what’s the most surprising thing we don’t know about Terrence Malick?

He’s a funny guy and he loves jokes. He loves naughty actions. He can start laughing on set and you can’t stop him. He’s not taking things seriously. [Once] me and Ben Affleck were shooting this scene, playing around, and he said, “Do something crazy!” So I grab Ben’s T-shirt and take it off and throw it over the fence into someone’s yard and Ben has to climb over. Can you imagine, in the middle of Oklahoma, Ben climbs over to get his T-shirt and these people look and there’s Ben Affleck in their yard. [Malick] loved it. He thought it was very naughty.

That must have made some Oklahoma housewife’s day.

You have no idea! Those people took out their cameras — uh, I’m being told I have to stop talking now.