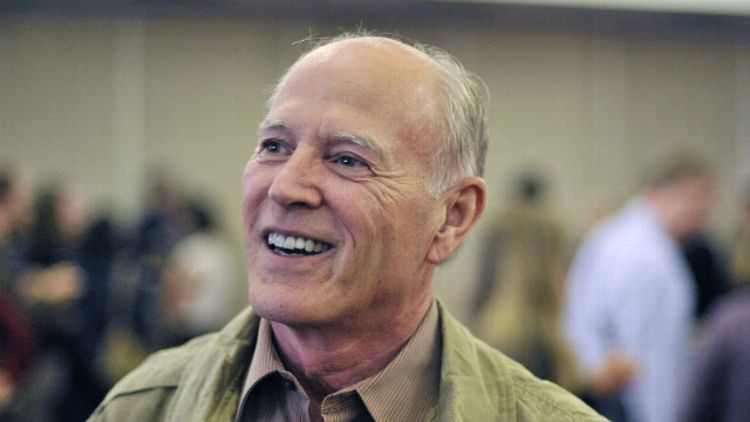 We will ask Frank Marshall — the producer behind four Indiana Jones movies, three Back to the Future movies, The Sixth Sense, Seabiscuit, and four Bourne movies — about the soul-nuking possibility that Indiana Jones is headed to the Bermuda Triangle. We will.

But first … Frank Marshall has directed a new ESPN documentary, Right to Play, which premieres Saturday. It’s about Johann Olav Koss, the Olympic speed-skating champion. In 1994, on his home ice of Lillehammer, Norway, Olav Koss won three gold medals. Marshall, who saw the races live, remembers the sounds of “cowbells and people just screaming.” After the races, Koss turned to do-gooding.

Koss’s charity, which shares its name with the movie, is dedicated to bringing sports to disadvantaged kids worldwide. Koss is its black-haired, bespectacled ambassador — Harry Potter with huge thighs. In one scene, Marshall’s camera tracks him to a Ugandan village. “I did speed skating,” Koss declares, “which is a sport where we go fast on ice.” The villagers look perplexed.

Right to Play is a montage of small, memorable scenes. A young Somali girl remarks, “You can’t play anywhere, because there’s no peace.” Koss wonders whether he should parachute into war-torn countries with rice instead of soccer balls. We see a girls’ volleyball game in Peshawar, Pakistan. “I didn’t want to be there very long,” Marshall says. “We did a couple of interviews and left.”

The 65-year-old Marshall, who has thinning hair and the build of a marathoner, is the producer who heralded the blockbuster era. As a pre-law student at UCLA in the ‘60s, Marshall was more into playing on the Bruins’ first NCAA soccer team. In what we’ll call Big Break No. 1, he went to a party hosted by the director John Ford in 1966. Peter Bogdanovich, the aspiring director and Esquire critic, floated across the room. “Frank and I were the youngest people there, and I gravitated toward him,” Bogdanovich remembers. “And we talked.”

Bogdanovich “knew about directors and acting,” Marshall says, “but he didn’t know how to get anything done. He didn’t know to rent a car or make a sandwich or water the lawn. I knew how to do all those things.” They were the perfect pair: the Howard Hawks–quoting auteur and his Man Friday.

Peter: “This is boring, Frank. Do we have any stunt people?”
Frank: “We have stunt people but we don’t have cars.”
Peter: “Frank, go to Hertz and rent some cars.”

“On The Last Picture Show,” Bogdanovich says, “we were all sitting around at my suite at the Ramada in Wichita Falls. It was stiflingly hot. I said, ‘We need air, Frank, we need air!’ He picked up an ashtray and threw it through the window.”

While Bogdanovich and Marshall were shooting Daisy Miller in Rome, a twentysomething named Steven Spielberg happened to stop by the set. “He looked like another kid backpacking through Europe,” Marshall remembers. Marshall said a quick hello and then hurried off to find out what Bogdanovich wanted next.

Call this Big Break No. 2. Marshall’s monklike devotion impressed Spielberg, and he told Verna Fields, who would later edit Jaws, “That’s the kind of guy I need: a guy who’s more interested in the next shot than lunch.”

Five years passed. Then one day, Marshall’s phone rang. “I got this call in my little hovel in Westwood,” Marshall says. “‘Would you be able to meet with George Lucas?’ I said, ‘Let me check my schedule … ’”

Spielberg was as needy as Bogdanovich, but his requests had a demented, B-movie tinge. On Raiders: Frank, go fetch the cobra serum. (Marshall can be seen as the Nazi pilot in the famous Flying Wing fight sequence.) On Indiana Jones and the Temple of Doom: Frank, go and film the evil Thuggee getting ripped apart by alligators. Together, they assembled a groovy catalog of the ’80s: the Indy films, Poltergeist, Gremlins, The Goonies, Back to the Future, Who Framed Roger Rabbit? (Marshall later directed Arachnophobia, Alive, and Congo).

With his future wife, the producer Kathleen Kennedy, Marshall founded Amblin Entertainment in 1981. There is often confusion about what a movie producer actually does — a state of uncertainty usually encouraged by the producer himself. At Amblin, Kennedy tended toward the creative side, putting adaptable books into Spielberg’s hands and tending to nervous screenwriters. Marshall took the art and turned it into a workable, solvent production. “I’m the one that worries about the logistics and the finances and the budgets and the schedules,” Marshall says.

“Steven was a very hands-on guy,” says Joe Dante, who directed Gremlins under the Amblin banner. “But that didn’t mean he wasn’t able to delegate things to Frank once he made his point or had his say and had moved on to other stuff. … Frank was a paradigm of what a good producer was supposed to be.” Paired with Kennedy, Marshall nearly always plays the good cop: calm and affable, extending a beer to the director who has just fired Eric Stoltz. “He’s able to get it done,” says Bob Gale, the co-writer and co-producer of Back to the Future. “And he’s able to do in a way that you’re not mad at him.”

Big Break No. 999: In September 1997, Marshall and Kennedy, who had by then left Amblin and put up their own shingle, received a spec script titled The Sixth Sense. They had 24 hours to read it. Marshall claims he started yelling when he got to the last two pages. When the producers met the writer, M. Night Shyamalan, he had posters for E.T. and Raiders of the Lost Ark on his wall. They were hired. The picture made $672 million.

After Right to Play, Marshall is releasing The Bourne Legacy, his fourth film in the series (and the first starring Jeremy Renner) in August. He’s still working with his old friend Bogdanovich to try to edit Orson Welles’s last film, The Other Side of the Wind. Marshall worked on the set as a production assistant; Bogdanovich, who acted in the movie, has detailed notes on how Welles wanted to edit it. “The negative is in a vault in Paris,” Bogdanovich says, “and the positive is in a vault here in Los Angeles.” Sort of like the Ark of the Covenant.

Speaking of which, we’ve waited long enough: Frank, what’s going on with Indy 5? Is Indy going to the Bermuda Triangle?

“If you think about it, in an Indiana Jones movie there’s gotta be that quest, that object. It’s the Crystal Skull or the Lost Ark. The Bermuda Triangle doesn’t fit into that. I could feel with full confidence, without even talking to George or Steven, that we weren’t doing that.”

He has authorized the following message: A new Indy movie is no closer than it was six months ago. Rumors that Frank Marshall will be at the center of it, and asked to do something demented, are probably accurate.

AMC Will Re-Air The Walking Dead Pilot in Black and White, Because Why Not?