Powerless Rankings: How Do the Impotent Protagonists of Breaking Bad, Curb, and Louie Measure Up This Week? 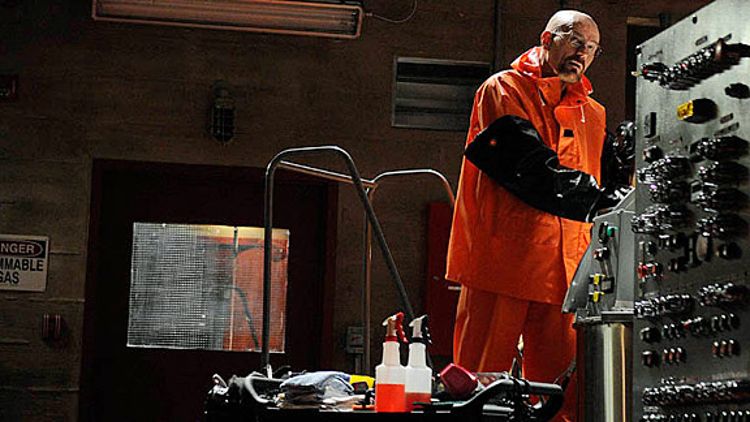 Predicament: Big drama for the Greenes as their beloved German shepherd, Oscar, has to be put down just before they move to New York for three months. Larry and Jeff are suffering from low blood sugar, so they wind up eating Oscar’s last supper of Pinkberry — a perfect crime they would have gotten away with if it weren’t for that meddling Vance, currently observing a vow of silence as recommended by his spiritual adviser, shattering said vow by ratting them out after Larry left a nasty note on his windshield lambasting his double-parking habits.

Meanwhile, Larry declines TV director Tessler’s invitation to come volunteer at a one-day camp for disabled kids by claiming he’s going to New York to work on a show with Seinfeld. As the camp’s date changes, so, amazingly, do Larry’s travel plans, but not his insistence on avoiding it — or Tessler’s persistence in asking, going so far as to call Larry’s bluff by offering him a three-month sublet in Manhattan. So, for anyone wondering what the narrative conceit that would send Season 8 of Curb Your Enthusiasm to New York would be, there you go: It’s to follow-through on an elaborate lie devised to avoid helping the helpless.

Henpecking: By going to New York for three months, Larry is essentially subjecting himself to three months of pure, unadulterated Susie.

Insecurities about appearance, health: Larry’s enthusiastic embrace of high-quality frozen yogurt is to be commended.

Career frustrations: On Larry’s part, none, but admit you got your hopes up a tiny bit that Larry David and Jerry Seinfeld might actually do another show together.

Proclivities towards violence: Larry David is like a short, one-man vigilante against drivers whose cars needlessly straddle two parking spots. Someone in Brentwood is going to get mildly hurt.

Xenophobia/racism: There is some degradation of veterinary medicine as a profession worthy of the title “doctor,” but Mad Men’s Rich Sommers is most definitely white.

Predicament: Because everyone loves prequels, the opening sequence flashes back to new father Louie on the set of his clearly doomed sitcom Oh, Louie, taped live before an exasperated but easily amused studio audience. (Note: The kitchen set’s mustard-yellow walls are a nod to Louis C.K.’s short-lived HBO quasi sitcom Lucky Louie, but its saccharine groaners and lack of Pamela Adlon as an on-screen wife feel more like sub-King of Queens network schlock. C.K. may not harbor fond memories of that show, but it was much more a statement about, if not rebuke of, fat-guy-with-hot-wife four-camera pablum than this recollection suggests. Also: Bob Saget!) At home, Louie’s marriage is faring about as well as his TV career.

Ten years later, it’s Lily’s birthday, and Louie wants to get her Lady Gaga tickets. His nebbishy, possibly teenage promoter (didn’t 30 Rock get to this gag first?) can’t help and recommends he hit up the only comedian big enough to be repped by the same agency as her: the dread pirate, Dane Cook. The episode is essentially a painful set piece as Louie debases himself by going backstage to ask his nemesis — and, really, the nemesis of all self-respecting comics who don’t play hockey arenas, but, let’s face it, a good sport — for a handout. Cook agrees to get the tickets, plus backstage passes, as long as Louie goes on YouTube to publicly refute longstanding allegations that Cook stole jokes from him. The two don’t exactly hug it out, but common ground is reached, and Cook’s advice that Louie get his daughter something special that doesn’t come in an envelope bombs gloriously. For a show that seems to perform small miracles on a weekly basis, making Dane Cook sympathetic may be the show’s parting of the Red Sea.

Henpecking: Is it truly henpecking if the source is a little girl? Is it worse?

Insecurities about appearance, health: Turns out Louie looks exactly the same as he did a decade ago, so he should have no worries there. Or, alternatively, he looked like shit at 34.

Career frustrations: If there’s anything more disheartening than walking off your own shitty sitcom and sabotaging your first big break, it’s being escorted by a phalanx of security brutes to pay respects to Dane Cook.

Proclivities towards violence: None, although there was doubtless a good million or so people hoping Dane Cook might catch one in the nose.

Xenophobia/racism: None really, although white college students definitely have a lot to answer for.

Predicament: So intent is Skyler on selling the nuances of Walt’s gambling-windfall cover story to explain the car-wash purchase that she has him study blackjack and a carefully detailed script before their coming-out dinner with Hank and Marie. Walt tries to play along but bristles at being in the position of having to apologize, even in character — he’s done all this, and more than his wife could possibly imagine — in the name of his family’s well-being, even if it’s not quite about that anymore. (Somehow, they seem like less of a married couple now than they did before Skyler suspected something was amiss.)

The big reveal takes a backseat to Hank’s bombshell to Walt, first manifested with Gale’s amazeballs “Major Tom” karaoke video, and, ultimately with the lab notes. (Theory: Vince Gilligan regrets killing off David Costabile so quickly and will now find ways to bring him back every week. Can’t wait for Episode 6’s flashback to Gale’s 2002 yoga retreat in Tuolumne.) Walt is able to not only keep from throwing up on himself, but deflects even a hint of suspicion about the nature of the W.W. epigraph by dropping some choice Walt Whitman science. Although there’s certainly a lot more suspicion to come.

Meanwhile back at Pinkman’s Inferno, things are devolving further still when Jesse’s bag of cash, stored safely in the underwear drawer, goes missing, although he doesn’t seem particularly fazed. Even with half an ear blown off, Mike knows there’s trouble and tells Gus. When Jesse disappears with Mike, Walt fears the worst, but Jesse, dead-eyed, doesn’t seem to care whether he’s about to be shot in the face or not.

Henpecking: A script. A script!

Insecurities about appearance, health: Walt’s cancer is directly referenced for the first time in what seems like forever; it’s easy to forget that this is where this whole thing started and that he may not necessarily be out of those particular woods.

Career frustrations: It’d be nice if Walt did, in fact, wear a nice lab coat to work, but in reality, the combination of Gale’s murder and Hank’s investigation of it, not to mention Skyler’s micromanaging, has to make Saul’s offer to get disappeared sound awfully enticing.

Proclivities towards violence: Nope, pretty much just bottled-up and festering this week. And Walt’s no match for a couple of junkies who’ve just been offered a hundred bucks.

This week’s most powerless: Thanks to some midcareer malaise, Louie’s hot on Walt’s heels this week. But it’s already looking like Mr. White’s got a mortal lock on the honor of being TV’s most put-upon, middle-aged, white male. But keep reading every week anyway!