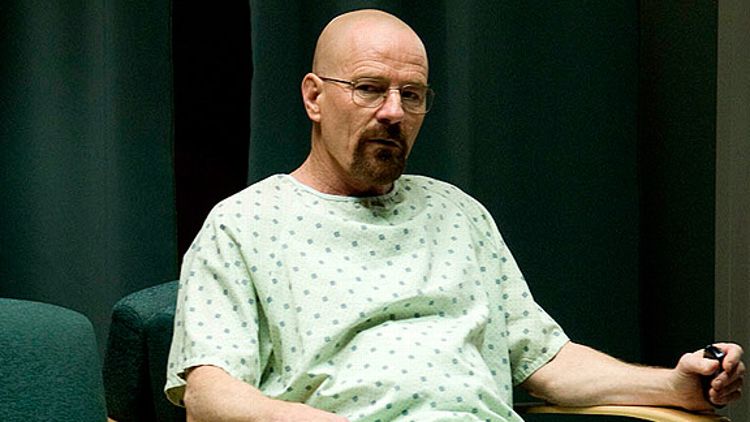 Predicament: The main objective of “Hermanos” is to establish Gustavo Fring’s origin story and the source of his conflict with the cartel and the now-silent Tio Hector, just as Hank seems to be backing the stoic chicken man into a corner. But that increased scrutiny — combined with Walt’s unwitting participation in Hank’s case and Jesse’s apparent shift in loyalty towards the man he’s supposed to be poisoning with ricin — causes Walt to feel strangely simpatico with the man he’s been trying to murder all season. (You know, in self-defense.) He knows this looks bad and wants Gus to understand he wants no part of the tracking-device scheme Hank is counting on to counter Gus’ ice-cold, largely redemptive questioning.

On a show as smart as this, you’d like to think Hank’s enlisting of Walt as junior DEA agent is meant as a test for Walt rather than an easy plot contrivance exploiting the show’s one unavoidable narrative Achilles’ heel — the coincidence that the southwest’s reigning meth manufacturer happens to have a DEA agent as a brother-in-law. Breaking Bad has never tried to gloss over that coincidence, and, in fact, this is how Walt first got the idea, but with all the potential pitfalls awaiting Walt, becoming Hank’s partner is the most … obvious.

A bit less obvious: cancer. Walt talks a good game about self-determination while in for his latest PET scan, but it’s hard to gauge how much he believes this given his own mixed results with gaining control over his life. It’s also hard to gauge whether or not Walt’s lying when he tells the family his cancer’s still in remission. It could be argued that the cancer was the true source of Walt’s — sorry, Heisenberg’s — power, and that he’s been losing his mojo ever since the scans came out clean. So just as Walt finds himself over his head in every aspect of his life, maybe a gray spot is just the silver lining he’s hoping for.

Henpecking: Walt is pretty much free of Skyler’s micromanaging this week, and the fact that her vacuum-sealed money bags break the closet curtain rod is another sign that she knows less about what she’s doing right now than she’d care to admit.

Insecurities about appearance, health: Walt’s spiel to the scared guy in the waiting room sounds like something straight out of a Lance Armstrong memoir, about not letting the cancer take control, and doing whatever you want in the time you have. But his dull affect when mentioning in passing that he’s still in remission feels either like a bald lie or disappointment that a grim prognosis can’t snap him back into supervillain mode.

Career frustrations: Once a source of frustration and totem of insult, Walt now uses the surveillance camera like his own FaceTime with Gus; he is no more comfortable with his sitting-duck status, and Jesse’s shady new responsibilities are no help, but Walt is trying to adapt. Still, his Aztec really should have an “I’D RATHER BE DRIVING TO A GEM AND MINERAL SHOW” bumper sticker.

Proclivities towards violence: He still wants very much for Jesse to kill Gus with a ricin-filled lucky cigarette, but he does not avail himself of the chance to do it himself face-to-face as he’d previously wanted.

Xenophobia/racism: Walt is totally racist towards dudes who are afraid of cancer.

Predicament: Larry David seems like the kind of guy who goes to therapy less to improve himself than just to have another venue in which he can talk about himself at length and without guilt or pretense. He’d gladly pay the price, as long as it’s not for a quick chat on line at a baseball memorabilia convention. Though the revelation that Larry was scarred as a teenager by a strip-poker game gone awry in the back of a Mister Softee truck (this seems every bit his neurotic-origin story as the pool meeting was for Gus Fring) is certainly key to his battered psyche, it’s more an excuse to delve more into the concerns about baseball and sexual performance anxiety that New York seems to bring out in him.

Really, this whole episode is what the mourners seeking a minion for their Kaddish would call a mitzvah — after 25 years of having to endure strangers seething at him on the street for letting Mookie Wilson’s ground ball trickle through his legs in the ‘86 World Series, beleaguered Red Sox first baseman Bill Buckner is redeemed: First by Larry, who blows his softball team’s championship by letting a ball through his legs and must suffer the consequences in the form of Robert Smigel’s Triumph accent and an unrepaired passenger seat that makes comic actresses of a certain age show Meg Ryan how it’s done, then by acrobatically catching a falling baby himself. (The fact that the last two New York-based Curb episodes have focused on cars reminds us how many Seinfeld episodes centered around cars, which also reminds us: Hey, Larry David: No one in New York rides around in their own cars all that much.) As with the Hall of Fame episode a couple weeks back, baseball is a comic analogy tailor-made for a newly-single middle-aged man justifiably worried about his slugging percentage.

Henpecking: There is no amount of carping or braying that Susie could ever inflict on Larry that would bother him more than having to watch her ride shotgun in the orgasmoseat.

Insecurities about appearance, health: Again with the impotence: Going limp to the strains of the Mister Softee music makes the most of an obvious joke.

Career frustrations: Ricky Gervais annoyances aside, New York seems to be where Larry goes to not work in the entertainment industry or, really, at all.

Predicament: You’d think that raising two daughters would give Louie a sense of what was to come, but the sudden, uninvited presence of his troubled sister’s 13-year-old Amy (Pamela Adlon’s own daughter, Gideon) shows him to be about as unprepared to take care of a girl that age as he was a duckling in Afghanistan a week ago. She sulks, she walks through Grand Central Station and into the street without listening, she sits alone in a room for hours, she wants to go see some band at Fontana’s, she thinks charity is about the giver, and she relates more to an amiable, empathetic comic like Godfrey than self-absorbed neurotics like Louie C.K. and Todd Barry. And, if the end of the episode is to be taken seriously, she’s also going to be around a while, although it’d be pretty great, and not totally out of line with the show’s general M.O., for the whole adopting-Amy to be dispensed with entirely without explanation.

Henpecking: Without his own daughters around to reinforce his already flimsy sense of authority, his sister and niece essentially beat him to a pulp. Maybe this is why the show went a little longer than usual with the opening standup bit about the uselessness of 20-year-olds — it’s pretty much the only time he doesn’t resemble a giant puddle with a goatee in the whole episode.

Insecurities about appearance, health: He’s not afraid to bomb, terribly, just to impress Amy. Actually, he probably is, but he does it anyway.

Career frustrations: Crowd work is harder than it looks!

Proclivities towards violence: Just towards jaded 20-year-olds working in retail, but it’s hard to imagine that this would be prosecutable.

Xenophobia/racism: Nothing like getting called out on your armchair liberalism by a 13-year-old.

This week’s most powerless: Walt has his delusions of self-empowerment, and Larry exorcises his sexual phobias, but only Louis C.K. looks like he’d prefer doing crack and acting irrationally in a Philadelphia fountain than be responsible for keeping a 13-year-old girl who isn’t even his alive.