NOW It’s an Olympics Party: ‘The Daily Show’ and ‘The Colbert Report’ Begin Their Sochi Coverage 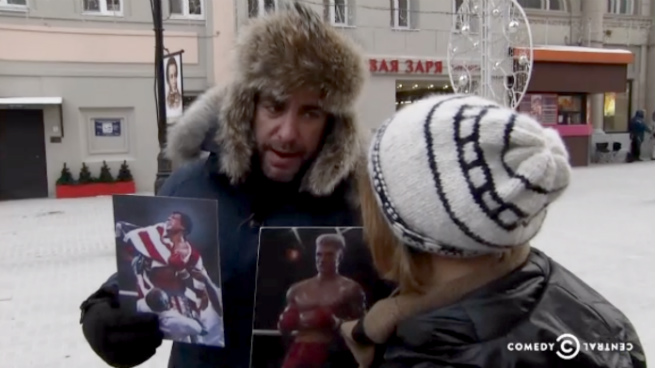 Sochi Olympics coverage has come at us from every angle and outlet imaginable. But when the big boys of spoof news — that’d be The Daily Show and The Colbert Report, both of which aired their inaugural Sochi segments on Monday night — show up, it’s time to really pay attention. Bow down, bitches NBC.

Remarkably, both shows managed proper takedowns before even stepping foot in Sochi. Stephen Colbert called in his special correspondent/producer/ex-camp buddy Buddy Cole — played by Scott Thompson, reviving his belatedly flamboyant Kids in the Hall character — to investigate these so-called gay propaganda laws. Cole sat down with Dan Baer, an openly gay U.S. ambassador to a European security consortium, about how to fit in at Sochi (while sipping a martini). “Would a rainbow shirt get you arrested? How many zippers is too many? In other words, not too many zippers?” Also, he tried out some helpful go-along-to-get-along phrases, such as, “Women! Who needs them? Except for their vaginas!,” and, “Vaginas! Can I have two of them?”

Meanwhile, The Daily Show actually did send Jason Jones to Russia, but had him stop in Moscow. There, he hooked up one delightfully clever evisceration of those old, lingering Cold War stereotypes, presenting a city where bread lines have long been replaced by Shake Shack lines, people know well enough to dismiss Boris and Natasha from Rocky and Bullwinkle as “American bullshit cartoons,” and everything looks a lot like home, “just with a fucked-up alphabet.” This being The Daily Show, this all severely bums out Jason. “You used to hang people in Red Square,” he laments. “Now it’s just a fucking ice skating rink.” Later, he gets into it with a Russian government official about whether or not the U.S. created Al Qaeda in its proxy war against the USSR, proving again that TDS is one of our most reliable sources of political subversiveness in mainstream entertainment. And by the time we get to Jones actually asking Gorbachev to reverse course and “put up that wall,” well, we’re really somewhere special. Twentieth-century history as pinged around in The Daily Show’s house of mirrors? Yes, please.