November Book Recommendations: ‘Yes Please’ and ‘Not That Kind of Girl’ 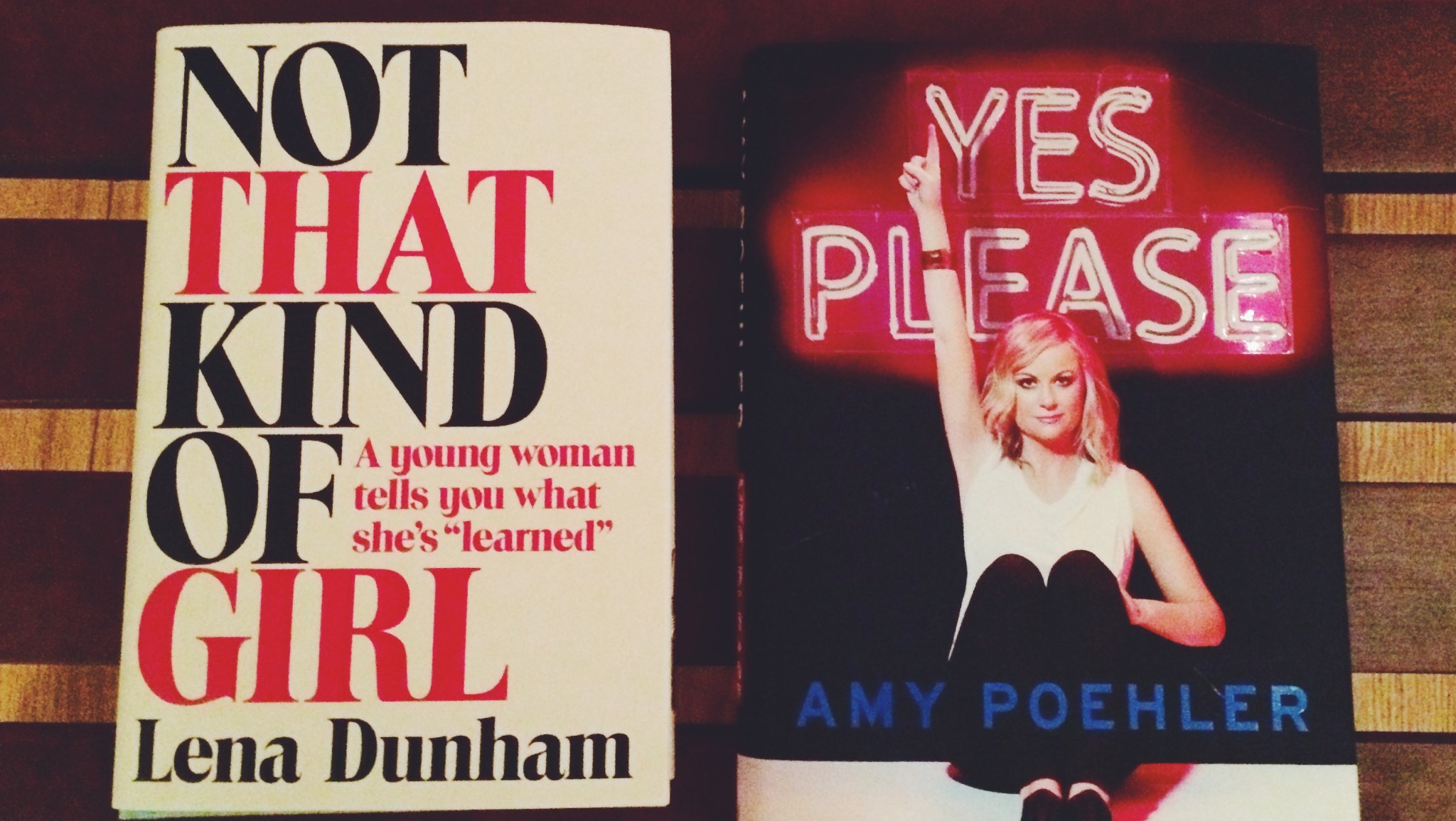 Despite my best efforts, I am a woefully inept older brother. Through a well-intentioned sense of duty, I want to impart some kind of wisdom to my sister, a college sophomore. But what kind of advice can I really give to a young woman? What could I possibly say to her that wouldn’t just be mansplaining? I figured it might just be better to let the advice come from people who know better, or at least have won Golden Globes. For my sister’s 19th birthday, I gave her 1Amy Poehler’s memoir, Yes Please, and Lena Dunham’s essay collection, Not That Kind of Girl.

We’ll start with the Poehler, because I think it’s the one my sister will like more. (She’s a Parks and Recreation fan, but as far as I know, has no interest in watching Girls. This also makes her the only member of my family not abusing our father’s HBO GO account.) Yes Please is very much a book for people who are already in love with Amy Poehler. With humor and humility, she details her early life and her ascending career in comedy as the founder of the Upright Citizens Brigade, a cast member of SNL, and eventually, creator of Parks and Rec. She also talks about friendship, mothering two boys, and her recent divorce. In some ways, it is odd to give a 19-year-old a book that talks so much about divorce, but her perspective on it is one of necessary hardship. That is to say, I don’t hope my sister will ever get divorced, but I do hope she is strong enough to know when she has to.

Yes Please is in the same vein as Tina Fey’s Bossypants and Mindy Kaling’s Is Everyone Hanging Out Without Me?: a very funny, friendly memoir that approaches feminism without ever really saying it. The place where Poehler’s book distinguishes itself most from Fey’s is how much prescriptive advice she has. On virginity, Poehler says, “Keep your virginity for as long as you can, until it starts to feel weird to you. Then just try to get it over with. Try not to have your first time be in a car.” On work, she says to think of a career as a “boyfriend” and that it is “healthy to remember you can always leave and go sleep with somebody else.” But the stickiest line comes toward the end: “Your ability to navigate and tolerate change and its painful uncomfortableness directly correlates to your happiness and general well-being.” Then she jokes, “See what I just did there? I saved you thousands of dollars on self-help books.” It wasn’t until I reached the end that I realized that Yes Please is part self-help book, part autobiography — two things that don’t jell as nicely as one might hope.

The chapters later in the book about Parks and Recreation will absolutely delight anyone who has ever watched the show, especially the one with thoughtful marginalia by Parks showrunner Mike Schur. In some ways, these are the best parts of the book. In others, they are the only parts that don’t really stand on their own. Again, Yes Please reminds us that it is exclusively for the Poehler fan.

Which is too bad, because there are sections of the book that should not be missed by anyone. Two of the book’s later essays — one about drugs, another about the moon — stick out because they are more patient and also surprisingly moving. They also might be the best pieces in the book, and a part of me wishes there was more of that in Yes Please.

Though Poehler and Dunham speak to very different periods in their respective lives, the parallels between the two books illustrate fears and concerns that even successful, beloved women never grow out of. (The introduction of Dunham’s book opens with “I am twenty and I hate how I look”; similarly, Poehler’s second essay begins with “I hate how I look.”) But the books wrestle with these anxieties differently.

You can’t judge a book by its cover, but you can glean its intentions by one. For Lena Dunham’s essay collection, Not That Kind of Girl, the cover frames the book perfectly by establishing what it isn’t. Conventional marketing wisdom would suggest that a celebrity releasing a book without their smiling visage is commercial suicide. There’s not even a mention that Dunham is the creator of Girls until you get to the inside flap — a move that I’m sure gave the publicists at Random House night terrors. But the ‘70s-style typeface and the coy subtitle, “a young woman tells you what she’s ‘learned,’” evokes the work of Nora Ephron. (Dunham welcomes the comparison by thanking her in the dedication.)

Back in May, I interviewed Lena Dunham about Not That Kind of Girl. Nothing from the book had been released yet, other than the cover, since it had been embargoed. The original proposal for the book had been doxxed by Gawker when it was on submission, and Dunham was afraid that releasing any material from the collection ahead of time fielded the same risks. All she could say about the book was that she intended it to be the kind of artifact a mother would hand down to her daughter.

The book begins in Dunham’s sophomore year at Oberlin. Her concerns are universal adolescent anxieties — virginity, diets, good relationships, crappy relationships — thoughtfully rendered between personal anecdotes that are sometimes uncomfortable, sometimes emotional, but most of the time hilarious. (Dunham should’ve dedicated the book to David Sedaris as well.) People will praise Not That Kind of Girl for its candor when really it’s Dunham’s literary gifts that make these essays work as stories and as lessons. Her storytelling feels effortless, but a closer inspection reveals narratives that are intricately constructed, especially when they jump backward and forward in time. And I cannot overstate how funny this book is. There’s a real craft here to how every joke is paced and timed, and I couldn’t help but imagine my sister laughing at all the same parts I did.

It is, however, an imperfect book, full of distractions. The intermittent listicles like “10 Reasons I <3 NY” are often flat, and the illustrations by Joana Avillez that adorn the essays do little other than conjure memories of Judy Blume. Dunham’s teaching philosophy is something along the lines of “this happened to me, and here’s what I learned.” It works for the most part, but it also breaks down when she’s talking about strictly upper-class matters, like choosing an expensive therapist. As the daughter of two very successful artists, Dunham’s life is privileged — the essay “Girls & Jerks” exists to acknowledge that — but it’s hard not to roll your eyes hearing Dunham talk about spending four days at Chateau Marmont with her college boyfriend. The acknowledgment of privilege is not necessarily the same thing as showing self-awareness of it.

Still, for all its brevity, Not That Kind of Girl has many sneakily powerful moments. Dunham’s slow realization that an unwanted college hookup was actually rape is an absolutely gut-wrenching essay. Another unforgettable scene is when Dunham’s younger sister Grace comes out to her and Dunham immediately break into tears. “I began to sob,” she writes. “Not because I didn’t want her to be gay … No, I was crying because I was suddenly flooded with an understanding of how little I really knew.” Admissions like these resonated strongly with me (this one in particular, as we are clearly both crappy older siblings). For all of the things she confesses throughout the book, it is the places where Dunham acknowledges what she doesn’t know that are the most reflective.

I want my sister to have all the answers, but the hardest part of being her brother is understanding that no matter how many things I say to her, she won’t have the solution for everything. If she’s to take one thing from Not That Kind of Girl — a book that defines modern feminism by what it isn’t — it’s that not having the answers is OK.

A strange review of Dunham’s book in the Washington Post asked, “How novel would it be to read Lena Dunham’s thoughts on the idea of failure?” (Side note: How about we review books for what they are instead of what we want them to be?) It’s true, there’s not a whole lot of failure in Not That Kind of Girl, or in Yes Please, for that matter. Both women talk about ambition and success because these are things they possess, but it’s also a matter of perspective. Poehler doesn’t treat her divorce as a failure of marriage — it is another change in her life that must be understood and adapted to. Dunham, through all of the intimate details she divulges about her life, exposes her mistakes in hopes that the reader may avoid them. Whereas Poehler comes across as deeply empathetic, Dunham seems aware when she isn’t. I have no idea if either of these books will make an impression on my sister, but at least she’ll laugh.