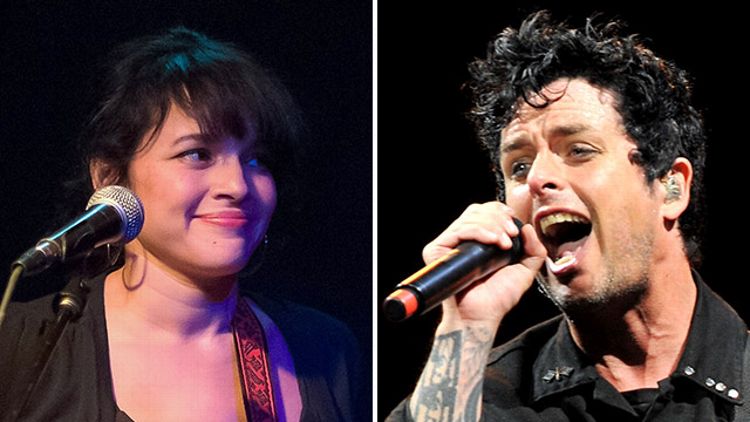 Green Day’s core fan base, wherever it resides in 2013, might not spend a lot of time with Norah Jones’s catalogue. While I’m generalizing, let’s presume the same for Jones fans regarding ’90s pop-punk acts. But there’s no guesswork when I say that within the Come Away With Me/Dookie Venn diagram, there’s not even an overlapping sliver of people pining for Jones to tag-team an album of Everly Brothers covers with Billie Joe Armstrong. And still, that’s exactly what happened.

Dubbed Foreverly, the effort is a front-to-back redo of 1958’s Songs Our Daddy Taught Us, the Bros.’ second album, itself an LP of traditional tunes by Gene Autry types. “I was listening to it every morning for a while off and on,” Armstrong tells Stereogum. “I thought it would be cool to remake the record because I thought it was sort of an obscure thing and more people should know about it, but I really wanted to do it with a woman singing because I thought it would take on a different meaning — maybe broaden the meaning a little bit — as compared to hearing the songs being sung by the two brothers.” Armstrong’s wife suggested Norah Jones; the two had met once before, singing next to each other during a superstar version of “Across the Universe” at the Grammys while John Lennon rolled in his grave. Timid li’l Billie Joe gave Norah a call, likening it to a blind date — one that ends in an album no one asked for but lots might like.

Neither singer is a stranger to the artistic juke, from American Idiot hitting Broadway to Jones’s collaborations with Outkast, Ray Charles, and a brand-new one with her sitarist sistar Anoushka Shankar. The first Foreverly cut to show up online, “Long Time Gone,” scrubs the Green Day from Armstrong’s voice nearly entirely and sounds right in Jones’s country-tinted wheelhouse. It’s pleasant and mildly twangy, playing like an HQ recording of a Friday-night barroom gig by a duo that’s been at it awhile. “All my friends who I told about it were really excited but they had no idea what it was going to sound like,” Jones says. “They were really blown away by how Billie Joe sounds … that he sounds so Everly-esque. Everyone has been so surprised and impressed.”

The pair knocked out the album in nine days. “There’s no riddles about these songs,” Armstrong says. “They’re just straight-up songs about a kid dying from consumption and a guy killing his wife and throwing her in a river and a song about the loss of love and blah blah blah.” From the tone and banter in Stereogum’s interview, it sounds like the two had a blast — meaning we should absolutely go ahead and hope for the spirit of fun to lead to an exact re-creation of the Songs Our Daddy Taught Us cover art, featuring Norah and Billie Joe.

There are no plans to tour or make a solo album–size fuss about the release, which is kind of the reason Jones and Armstrong did it in the first place. “I think for the past 25 years, with my band, it was this constant building of chaos and this kind of beast that just grew and grew,” Armstrong says. “And to sort of jump off that train for a while and just do something for the sake of loving the music and loving a project and there’s no agenda attached or anything like that … I don’t know, I loved it.” Jones concurs: “We actually just went into a studio to make music. There’s no agenda.”