No ‘Hey!’: The Head and the Heart and the Way Forward for Folk 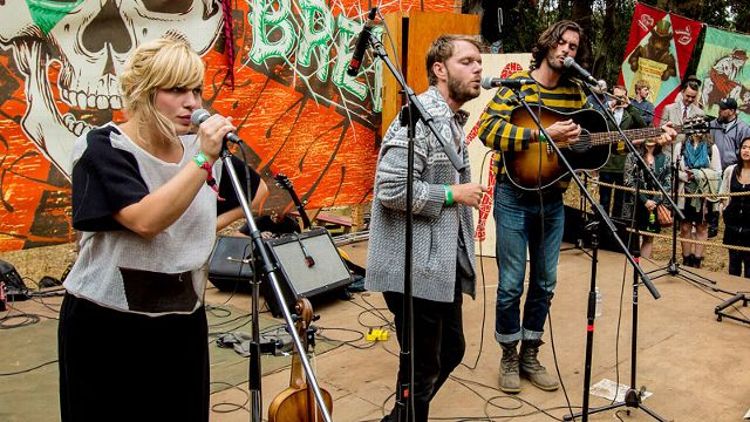 When did the “Hey!” Folk invasion of pop music officially become unbearable? Was it American Idol winner/poor man’s Dave Matthews Phillip Phillips co-opting the sound that launched a thousand Mumfords on his ubiquitous debut single “Home” (which inexplicably pushed his album, The World From the Side of the Moon, to platinum status)? Was it that goddamned Lumineers song “Ho Hey” appearing nonstop in goddamned ads for goddamned Silver Linings Playbook? Was it Avicii’s “Wake Me Up”? Was it this disturbingly harmonica-heavy Pitbull track?

No matter the precise moment of this Rubicon-crossing, I think we have finally arrived at the point where the hull of American pop culture can no longer admit any passengers wearing bolo ties and wielding banjos. Study the history of American pop fads and a familiar pattern emerges — let’s say it begins with people deciding that ska music played by Caucasian ex-punkers is not an irritant but in fact a worthwhile musical genre. Suddenly, bands that used to be relegated to Skapocalypse in the middle of Iowa have infiltrated the mainstream, thereby transforming the Skapocalypse into an actual apocalypse. After a few years, people come to their senses, and the only bands that survive are the ones able to transition away from this formerly hip trend and into whatever is the next cool aesthetic.

Herein lies the lesson for today’s folky bandwagon-jumpers: For every No Doubt, there are dozens of Less Than Jakes. Plan accordingly.

This is the challenge presently facing The Head and the Heart, a pleasingly melodic if mostly unexceptional Seattle band that until now has tended to blend in with the grays and browns of the nu-Mennonite crowd. Formed in 2009 by singer-songwriters Josiah Johnson and Jonathan Russell, The Head and the Heart caused a minor sensation with its self-titled debut, which was initially self-distributed at shows and local record shops and eventually sold 10,000 copies. A year later, The Head and the Heart was signed to Sub Pop, which re-released the band’s album in the fall of 2010.

Not as emotionally hectoring as Mumford & Sons and a lot less corny than the Lumineers, The Head and the Heart gently stir up a warm porridge of cozy harmonies, gently bopping piano licks, and vaguely inspirational lyrics about the value of friendship and the wonder of being alive. It’s a sound that’s close enough to the Mumford-Lumineers vortex to reap the benefits of the association, and yet not so wrapped up in the hokier tropes of “Hey!” Folk to be tarred by them. (They keep the yelping to a minimum, in other words.)

To put it less charitably, The Head and the Heart is a rather generic pop-rock band — what remains to be seen is whether that blankness will help or hinder them moving forward. The Head and the Heart’s latest album, Let’s Be Still, arrives at the same time as the Avett Brothers’ Magpie and the Dandelion, which all but guarantees that The Head and the Heart won’t be the highest-charting band donning suspenders in Billboard next week. But even if the Head-Hearters lose the battle, they have a solid shot at winning the war: Let’s Be Still is a relatively bold turn away from overplayed affectations, downplaying the acoustic fetishism and shouty sentimentality in favor of relatively modern sounds. The slinky “Summertime” embraces ’80s synths, funky rhythms, and vocals that sound positively sultry by the band’s chaste standards. The guitar riff on “Shake” could be semi-credibly described as “rocking” — at least until those creamy harmonies swoop in — and “Cruel” dips both feet into inviting country-pop waters. Only the album-opening “Homecoming Heroes” plays by old rules, with its braying fiddle and requisite banjo ushering in a boisterously sweeping chorus.

Overall, Let’s Be Still seems like a proactive strike by a group anxious to disassociate itself from a movement that has reached maximum market saturation. Mumford & Sons might still be the best-selling rock band in the world, but The Head and the Heart has moved on to a new model: Ryan Adams. The genre-hopping songwriting wunderkind has never been a major commercial success, but he’s carved out a sustainable career that most guitar-hackers would envy. At least The Head and the Heart appear to envy it. The best parts of Let’s Be Still sound remarkably like Adams in Cold Roses mode, particularly the luminous tearjerker “Cruel” and the stargazing ’70s AM pop of “Another Story.” It’s hardly the sort of grandiosity that moves millions of units and takes temporary hold of an entire culture. But it won’t burn anyone out, either.

One of the more noteworthy songs on Let’s Be Still is the innocuously plodding title track, which testifies to the pleasures of inertia. “The world’s just spinning / a little too fast / if things don’t slow down soon / we might not last / so just for a moment let’s be still,” goes the chorus. It’s a sentiment that feeds a negative impression of Americana (or “roots” or whatever awkward genre tag you want to apply here) — that this music is basically a reactionary vehicle for hiding out from present-day realities.

In truth, our greatest musical traditionalists — from Dylan to Young to Tweedy to White — haven’t denied the passage of time so much as attempted to become its master. What these artists share is an obsession with pulling something deep, dark, and strange out from the chaotic mess of history and plugging it into a contemporary, singular, and often eccentric sensibility. The idea isn’t to “be still” but “to explore” — it’s an approach to music as a gateway to lost worlds and obscured connections that bind us to narratives that both predate us and will outlast our existence.

The wave of Mumford rip-offs might have already crested, but there will always be adventurous travelers voyaging on pop’s perimeters that seek to reinvent folk music. One of my favorites is Megafaun, a North Carolina trio that has veered between back-porch coziness and pure psychedelic noise with the freedom of an experimental jazz combo on excellent records like 2009’s Gather, Form & Fly and 2011’s Megafaun. The group’s latest, Appalachian Excitation, is a free-form, live-in-the-studio collaboration with composer and visual artist Arnold Dreyblatt that is equal parts cerebral and thrillingly physical. Forget the lockstep march to the predictably uplifting chorus that defines “Hey!” Folk — I’d rather tag along with Megafaun as it bounds fearlessly into a shadowy wilderness without a compass.

For people who care about such things, 2013 has also been a great year for instrumental guitar records: William Tyler, Glenn Jones, and Chuck Johnson are among the players distinguishing themselves by making dreamy, ethereal music that reimagines the guitar hero as sensitive introvert (rather than extroverted blowhard). My favorite of this thoughtful bunch might be Marisa Anderson, who weaves clean, tremolo-inflected guitar lines throughout the recent Mercury on a journey into the heart of deep Southern blues and gospel music. An understated virtuoso who typically gets in and out of a song in two minutes, Anderson perfectly balances rage and beauty in her playing, intricately layering delicate finger-picks amid bombastic strums. Given how staid and formulaic the most commercial forms of Americana currently are, it’s nice to be reminded of how powerful, mysterious, and marvelously idiosyncratic this music can be.