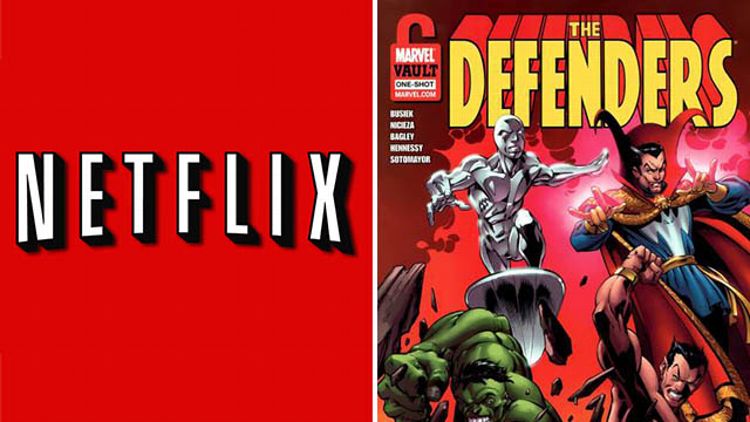 Here we are, only six episodes into ABC’s Agents of S.H.I.E.L.D., and the rumor about Marvel readying several more TV shows all at once has come true. Disney (which owns Marvel as well as Grantland) and Netflix will pair to present no less than four 13-episode series starting in 2015. Daredevil will be the first; Iron Fist, Jessica Jones, and Luke Cage will follow, and the four will culminate with a synergy-redefining miniseries, The Defenders. Marvel’s press release says “the epic will unfold over multiple years of original programming, taking Netflix members deep into the gritty world of heroes and villains of Hell’s Kitchen, New York.” Netflix’s press release just says, “WHEEEEEEEEEEEEEEEE!” (Theoretically.)

Thanks to Ben Affleck, the blind-but-absurdly-attuned-to-all-other-senses Daredevil is the best-known of the bunch, although all four heroes have done plenty of comic book path-crossing over the years. Iron Fist — who has nothing to do with RZA’s movie — is a martial arts master who can channel spiritual energy into punches. (He also temporarily took over for Daredevil once.) Luke Cage is one of the earliest African American superheroes to have his own comic; he’s from Harlem, was used as an experimental test subject, and wound up with impenetrable skin and the strength to lift 25 tons. (Dwayne “The Rock” Johnson expressed interest in the role earlier this year, before any real role existed.) Jessica Jones is a roundly gifted hero (she can fly! She can’t really get hurt!) who has also dabbled in private investigator work and superhero reportage; she and Cage eventually had a one-night stand, a kid, and a marriage. The Defenders, like all things Marvel, have a long, complicated history, differentiated from the Avengers by the fact that they have “no charter or by-laws, no permanent headquarters, no fixed roster, and little affection for each other.”

It’s not particularly surprising Disney opted to pair with Netflix instead of another network or service for this ambitious project. First, there’s the deal the two struck up last December, in which Netflix will acquire exclusive American TV subscription service rights to Disney movies beginning in 2016. Then there’s just general goodwill. “Netflix offers an incredible platform for the kind of rich storytelling that is Marvel’s specialty,” says Marvel Entertainment president Alan Fine. “This serialized epic expands the narrative possibilities of on-demand television and gives fans the flexibility to immerse themselves how and when they want in what’s sure to be a thrilling and engaging adventure.” Speaking of immersiveness: We already know S.H.I.E.L.D. and Thor: The Dark World will tie into each other, and similar rumblings surround Captain America: The Winter Soldier. Now just try imagining the charts and diagrams Marvel fans will be able to draw once this Netflix odyssey gets under way.

Fine calls the deal “unparalleled in its scope and size,” and it’s hard to argue with him, although, again, not terribly surprising. With movies reportedly planned through 2021, comics and toys coming out constantly, and this new Netflix development, Marvel’s eminence is nigh. Popular imagination has spent decades showing the moment we all get our own personal service/friendship robots, but shouldn’t we really be counting the years until superhero culture is so embedded in our lives that we’ve all got our own powers and service/friendship robots who just happen to look like Hulk & Co.?