My City of the Year: GTA V’s Los Santos 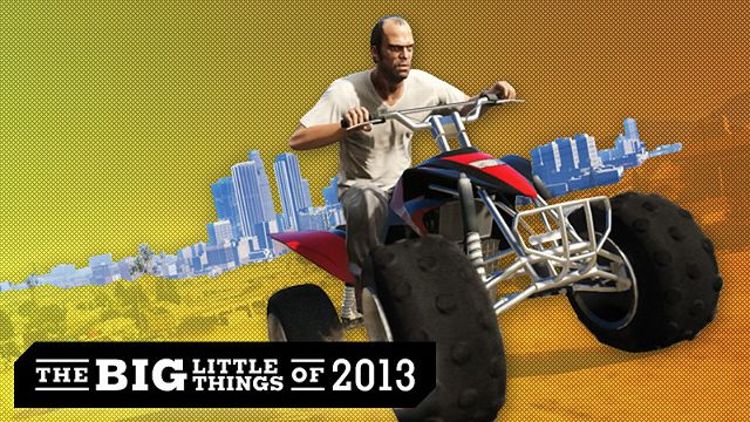 1. “I’ve always felt we base our games on the way a place lives in your head rather than the real place, the way it feels in your memory after you’ve left it, where it mixes in with art, TV, music, and films you’ve seen.” —Aaron Garbut, Rockstar Games

2. More than 29 million copies of Grand Theft Auto V have sold. That means more than three times as many people are living in the virtual Los Angeles than the city it’s based on.

3. Mandatory admission of bias: I moved to Los Angeles in the spring of 2011 from Brooklyn. As happens with all recent transplants, a certain defensive Stockholm syndrome has taken hold. But unlike a lot of New Yorkers who require a certain period to adjust — popular estimates place it between one and three years — I loved L.A. almost instantly. The space. The smell. The light and color and perpetual porny bloom. GTA V takes that feeling and spikes it with amphetamines.

4. Los Angeles is a driving city. This makes it perfect for a Grand Theft Auto game and is core to GTA V’s appeal. Spiritually, however, no setting will ever be better than Vice City. Grand Theft Auto is a dumb, venal game that requires a dumb, venal locale. That means America. And in America that means Florida. And nowhere is more Florida than Miami.

(Liberty City isn’t even a consideration.)

(That said, Grand Theft Auto: Rio would be remarkable.)

6. True story: When Grantland launched, the four people who spat it into existence slept in the office and did almost nothing but fight, work, yell, cry, stare red-eyed at rickety computers, and drink at a hotel across the street by a pool that always looked like a corpse had just been fished out of it.

You get to kill a hipster in that hotel in Grand Theft Auto.

7. One of the most unremarked-upon elements about Los Santos is how perfectly it encapsulates the way Los Angeles never really ends. Unlike New York, which runs into physical barriers of water and highway, or Chicago, which gently morphs into suburbia and then farmland, L.A. just peters out quietly into desert and desperation.

8. Another story: My wife and I drove to Ojai from Big Sur this summer, and we wound our way on the 5 through the Southern Central Valley — where some of our nation’s best produce and methamphetamine are produced. We stopped at a gas station in a rural town, half out of need and half out of curiosity. The lady behind the counter sold freshly killed meat and not much else. Three teenagers were out front attempting to bang a tire onto their 1997 Civic with a mallet. One of the kids asked me for 20 bucks and, when I said no, went back to grimly banging on his tire.

I guess what I’m saying is that this guy is nowhere near the invention he seems to be:

9. “The light is inspiring and energizing. Even with smog, there’s something about that light that’s not harsh, but bright and smooth. It fills me with the feeling that all possibilities are available. I don’t know why. It’s different from the light in other places. The light in Philadelphia, even in the summer, is not nearly as bright. It was the light that brought everybody to L.A. to make films in the early days. It’s still a beautiful place.” —David Lynch, Catching the Big Fish

10. One of the things you realize when you come to Los Angeles from New York is the great lie that the East Coast tells itself about the country’s center of gravity. In many ways, this is the true shock of moving here. More people live in California. More big companies are centered in California. More trends — political, social, demographic, culinary — start here than anywhere else. That kale shit? Started here. Metaphorically and otherwise.

Driving through Los Santos — with its “fruit” apps and Lifehacker friend requests, its rampaging paparazzi and “Vinewood” movie studios, its techie weirdos and yoga-obsessed freaks — only underscores that hard truth. This country’s primary exports are technology and junk culture. And it all comes from California.

11. Except, of course, Grand Theft Auto itself, which is from Scotland. Go figure.

13. I’m not going to go deep into the whole idea that we all live in digital worlds now — cities of our own creation, built tab by tab, polygon by polygon, subreddit by subreddit — but it’s all there for you in Los Santos.

Welcome to Black Mirror America. Your bungalow in the Vinewood Hills awaits.

The Homeland Season 3 Finale: Too Little, Too Late for a Lost Show

Survivor Finale: Like It or Not, Tyson Earned the Title