Born in the USA: Late-Summer Weirdness in ‘Mistress America’ and ‘American Ultra’ 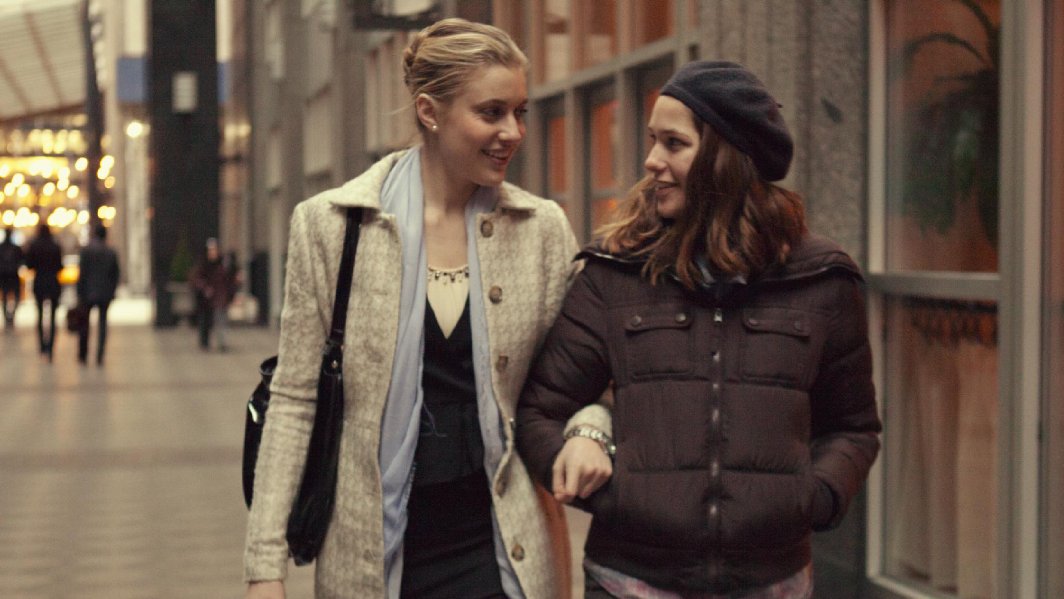 Mistress America is a bad title for an amusingly off-rhythm lark of a movie. But it works as one for the television show that Brooke (Greta Gerwig) tells her future stepsister, Tracy (Lola Kirke), she wants to create. Tracy hears Brooke’s breathy thematic explanation and cuts through the hot air: “It’s like she’s America’s girl on the side.” Tracy knows it’s kind of a clever line and probably wants Brooke to say so. Brooke’s annoyed instead, insulted that her train of thought was almost derailed. But her thinking is like that Magritte painting of the locomotive chugging, in midair, out of an empty fireplace. The movie, which Gerwig wrote with the director Noah Baumbach, isn’t far behind: a screwball comedy the surrealists would marry.

The setup is like something out of Victorian fiction, just if everybody were from New Jersey. Tracy’s mother (Kathryn Erbe) is marrying Brooke’s father (we never see him), but the two daughters have barely met. So Tracy (who has just started college) calls Brooke, who’s 30, seems outwardly together, and actually lives in Times Square, which she knows is lame but is proud of anyway. (The first time we see her, she’s clomping down the glossy red steps of the TKTS theater-ticket stand.)

Brooke takes Tracy to a concert and a house party — she makes Tracy feel sophisticated, which for some people also is a more valuable brand of cool. But Brooke’s life is a total self-contrivance, and she loves it. Her business-class style and sense of decorum make her seem as if she fell out of a Princeton brochure — or a Whit Stillman movie. But she has anticipated your judgy presumptions, which is why she’ll tell you she’s from Jersey and didn’t even go to college and that she’s self-taught and that, really, she’s modern and downtown-minded, ambitious, and always — always — up to something: tweeting while Instagramming, overachieving while undermining. There’s a reason she doesn’t appear to have any friends: She’s exasperating. (Her sleazy-sounding boyfriend is in Greece, doing deals.) Throughout all of this, Tracy has been storing details about Brooke and cribbing lines until she’s got a short story — “Mistress America” — that we hear Kirke read throughout the movie and that becomes the ethical centerpiece of the film’s second act.

As for the plot, the boyfriend dumps Brooke, leaving her homeless and without a financial backer to start her business — a restaurant/community center/hair salon. When a psychic tells Brooke to seek out an old friend, she and Tracy decide to shake down Brooke’s ex-BFF, Mamie-Claire (Heather Lind), for the money Brooke thinks she’s owed for a lucrative T-shirt idea the friend stole. (The friend also took Brooke’s man.) So it’s off to Connecticut to the friend’s modernist fortress, where the movie’s surrealism really takes over. Tracy brings Tony (Matthew Shear), a freshman suitor who basically stopped courting her right around the time she declined to critique a story he wrote. One day, she runs into him and he’s suddenly got a girlfriend, insecurely jealous Nicolette (Jasmine Cephas Jones), who burns with intelligence and contempt for Tracy. It’s his car they’ve all piled into to drive to Connecticut, where pregnant ladies reading Faulkner, awkward business propositions, a stunted chess match, a peeved neighbor (Dean Wareham), and a handful of recriminations await.

This kind of light, random, anti-realistic screwball comedy is hard to do well. The shouting and drunken scheming and coincidences can seem embarrassing because, together, they look unpolished or amateurish or unfinished. For instance, a very pregnant character named Karen (Cindy Cheung) is forced to participate in the craziness at Mamie-Claire’s because her husband never picks her up. But arbitrariness is what Baumbach and Gerwig are after, the illusion of chaos, an unromantic dream. For anyone who’s wondered how one of Luis Buñuel’s bourgeois farces might go in English, it’s probably something like these scenes in Connecticut. This American version is comparably restrained. No one dies, for instance. This is Baumbach and Gerwig’s third film together — the first they’ve written together since 2012’s Frances Ha. To quote Tracy to Tony: This new movie’s “just the same in another direction” — with much funnier dialogue and evocative electronic music by Wareham and Britta Phillips.

Mistress America feels like something from 1986 or ’87, something that abuts Jay McInerney and Bret Easton Ellis, John Hughes and Martin Scorsese’s After Hours. The film starts out as a satire of effete college life — Tracy and Tony write for and join the literary society, which admits new members with a predawn pie in the face. You’re worried they’re going to push too hard to mock the youth of today. I was nervous that a shot of Tracy’s cracked iPhone screen was going to become some kind of Generational Statement, but it’s possible Baumbach got all of that out of his system with While We’re Young, which was a hit for him in the spring. He’s still preoccupied with the ebb of youthfulness and the ache and fear of failure — but Gerwig reduces his bitterness without losing sight of the narcissism that, both as solo artists and a tandem, is really their target. Authenticity and artistic truth are equally important to Baumbach in both of his 2015 movies. It just feels better explored from the point of view of an 18-year-old finding her way — never mind that Kirke has the carriage and diction of a woman 10 years older (her sister is Jemima Kirke, who plays Jessa on Girls).

Really, what’s difficult about pulling off a movie like this is the fear of losing an audience because it looks like the director doesn’t know what he’s doing. This is how things can seem with Gerwig: like she’d never done any of this before. She never stops here — moving, self-aggrandizing, insulting, dazzling. There’s often no sharpness to the way Gerwig delivers a line. She’s not reading, but she’s also not talking the way most people do. So you’re not sure how to relate, and that foreign demeanor can be alluring, the way it was with Melanie Griffith and Rosanna Arquette, where you were sure they knew what was going on — as performers and as human beings — even if you didn’t. With Gerwig, you worry that she seems to be winging it — until you realize that she also knows how to fly. 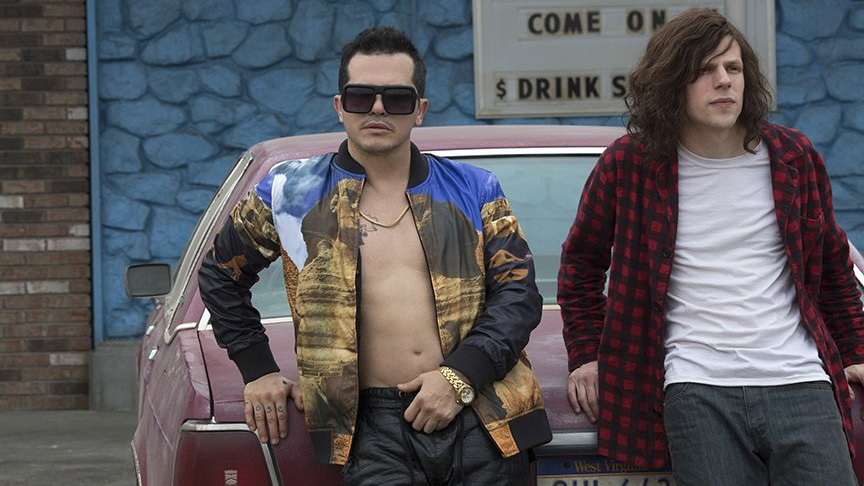 What is American Ultra about? The posters have Jesse Eisenberg and Kristen Stewart holding guns, and there’s an American flag. One tagline says, “Everyone’s getting smoked.” Another reads, “Meet the CIA’s highest priority.” I rolled my eyes at that one — really, the CIA doesn’t have anything better to do? But I’d mis-rolled. They’re the agency’s highest priority because they’re high. Well, they’re supposed to be high. We only see them smoke a couple of times, but this is the sort of movie that has to keep telling you that these two are stoners long after their last hit. Anyway, they’re also the CIA’s highest priority because they’re sleeper agents. The first scene has Mike (Eisenberg) all bloody, chained up in an interrogation room. What follows is all rewind. It turns out he’s an assassin whom the government brainwashed, stashed, and now needs to exterminate. (The film’s title has something to do with the name of one of the CIA’s programs.)

The movie has the sleepy vibe of some of those scuzzy ’90s crime thrillers. It aspires to Natural Born Killers, but has barely enough competence to get close to something like Feeling Minnesota. Mike slogs away at a sub–7-Eleven convenience store somewhere in West Virginia. He’s worked up the nerve to propose to his girlfriend, Phoebe (Stewart), but before boarding the flight to Hawaii he has a panic attack and they have to go home. You’re set up for a Bonnie and Clyde–style — sorry, Kalifornia-style — killing spree and get a Bourne-esque kick- and karate-chop-athon.

Mike narrates this movie — more total ’90s scuzz riffing (“We were the perfect fucked-up couple”) — and has been arrested for possession a few times. One night he and Phoebe are on the hood of a car looking up at the sky. He lights a joint and the camera pans up into outer space to a satellite and then down to the CIA’s building in Langley, where Connie Britton and Topher Grace are trying to outmaneuver each other, while poor Tony Hale stands there pretending to be stressed about having to operate a drone via laptop.

What actually follows is embarrassment after embarrassment. It was probably fun for Eisenberg to train himself to execute Jason Bourne–level stunts. But it’s a chore to watch. Nighttime action sequences can look rushed and cheap. They can feel like a good cover for poor planning or general incompetence. The ones here achieve all of that. Director Nima Nourizadeh also made Project X, a teen party comedy whose party has the grandeur of some movie-combat sequences. His big set pieces are a shootout in Mike and Phoebe’s cottage and another in a big-box store, and they’re a mess.

Some actual comedy does creep into the last couple of scenes. Nourizadeh and the credited screenwriter, Max Landis, finally figure out how to make the government stuff and the love story funny, but it’s too late. And I can’t see how you make comedy of this premise last for more than the one or two scenes here at the end anyway. Who knows what about this story interested the filmmakers? They don’t even really seem to care about the pot.

This won’t spoil the high-quality year Eisenberg and Stewart are having — The End of the Tour for him, Still Alice and Clouds of Sils Maria for her. But these two make no sense together, neither as friends nor as stoners in love. Britton, Hale, Bill Pullman, Walton Goggins, John Leguizamo: They’re worse than bad; they’re lost. No one’s worse off than Grace, though — not in any American movie this year. He’s prissy, bratty, and shouty. During that last shootout, he says to his henchmen of Eisenberg, “You two, can you kill him, please?” By this point, he’s not acting anymore. He’s managing a Starbucks.