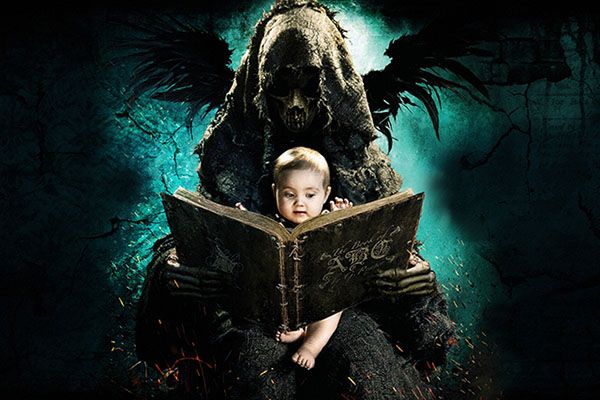 One summer when I was a kid, I went swimming in a pond against my family’s protests. I was a tomboy and I didn’t mind skipping along the slippery shore composed almost entirely of goose feculence and dead one-eyed minnows, and pushing stinky algae aside to relax in the wet funk. Halfway through my dip I cut my foot on a broken bottle and got a staph infection that, over the course of the next few days, spread up my leg in a bold red line that encroached on my knee joint. By the time I went to the doctor, my predicament was serious enough that I was warned that if I didn’t soak my leg every hour until the line receded, I would need my limb amputated. I spent 97 percent of my antibiotic-heavy recuperation fervently hoping I didn’t lose my leg, and 3 percent letting my mind crawl under the dark bed of my own imagination. I suppose this is what people with morbid streaks do. I soaked the offending body part and took every pill, but — even more so retrospectively — I was fascinated by what was happening.

I obsessed about my situation and couldn’t stop myself from playing out the goriest images from my own hypothetical surgery: When I looked at my leg, I thought, The murderer is inside the house. The realization that’s where the murderer always is — in the body — was profound at the time. I started watching horror movies unflinchingly, though sometimes shamefully, with the same interest that I had when poking my ailing calf muscle to see the white finger mark remain when it should have faded. Because of this, I thought I would be able to snack my way through The ABCs of Death. This was proven false by letter I.

This is all to say that I’m not a pearl-clutcher; I generally like this kind of stuff. The ABCs of Death, a 26-chapter horror anthology that premiered at the 2012 Toronto Film Festival, was released on VOD last week. Even the positive Rotten Tomatoes reviews sound somewhat cautionary: “wildly uneven,” “a pretty decent B-,” “feel free to take this review as a recommendation or a warning.” The consensus seems to be that The ABCs‘s ambition is its downfall, that 26 shorts is quite a lot and 26 different directors is even more of a lot. Also a conundrum is the fact that there’s no way to shuffle the shorts into any kind of overarching narrative unless you want to reconfigure the alphabet. Zetsumetsu, during which a woman sends root vegetables shooting out of her vagina into a soup pot before cutting off her enemy’s penis (her enemy otherwise appears to be a woman, by the way, wearing A Clockwork Orange makeup and a shape-shifting swastika emblem) and adding it to the recipe, might not have been my pick for the film’s finale.

I counted nine shorts I appreciated in some way (I was being generous), two I wasn’t sure about, and 15 that made me want to lie down on a fluffy bed in an upscale furniture showroom and die a public death wearing a sign that read “I saw a very bad movie. Don’t do what I did.” Horror anthologies are a great idea but an almost impossible feat to accomplish well, especially when (and I’d bet money this is the case with The ABCs) there’s little collaboration between the participants. Watching more than two dozen shorts that are almost universally extremely violent (exceptions: Gravity, Miscarriage (debatably), Klutz, and Fart, though the latter makes up for this absence in other ways) and involve heart-blackening images like kittens being stomped on with heels and a child being murdered by a toilet can kind of wear on a person, even a willing participant. No one chapter would have been too hard to take, but by the time you reach XXL, one of the best segments, your partying mood has been sullied by an overload of images of people peeling off strips of their own skin while oatmeal prop-barf spills out of their mouths. There is a lot of ejaculate hurled at your face in this movie (Libido, the aforementioned Zetsumetsu), enough that you will check your nightstand for a $20 bill after the credits. Or maybe you’re checking next to your alarm clock for the point of it all. Either way, you come up short.

It’s not that there aren’t interesting, worthwhile moments in The ABCs. There are several. Exterminate, which features a spider stalking a man in his apartment, is funny (the skeevy spider-on-me dance; a girlfriend on the phone asking if the protagonist doesn’t want to see her because “I stuck my finger in you”) and enjoyably gross; Dogfight is beautiful and somehow redeeming; Youngbuck is chilling and effective, as is XXL. Two meta-shorts, WTF and Quack, attempt to break up the bleakness by way of referencing the micro-budget and time constraints of creating a short for the anthology, one successfully (Quack) and the other not so much.

Part of the fun of The ABCs is guessing the title before it’s revealed at the end of each short: My companion yelled “QUAIL!” at a duck when it appeared onscreen for Quack. Removed baits you with several shots of railroad tracks, and bless you if you could have guessed the names of Gravity and Cycle based on the material you were given to work with. Some, like Fart and Orgasm, are a little on-the-nose. Fart might be one of the worst things I’ve ever seen, and yet I find myself strangely attracted to its memory, the Japanese schoolgirl uniform billowing upward before the nuclear explosion and the line, “Or maybe that black gas is a fart from the ass of God?” Hydro-Electric Diffusion, similarly, is memorably terrible. It could be subtitled Hitler Cat (you see Hitler Cat’s breasts, so there’s that). I ache to forget the self-aggrandizing Ingrown and its images of a woman scratching her skin until it bleeds, throwing up slowly over the edge of a bathtub, and being gagged by a necktie. Vagitus is less gross, but somehow remains boring despite decapitating a baby prophet. Of the many shorts in which toilets figure prominently, my favorites were a cartoon (Klutz — a woman chased by her own feces) and a Claymation short (Toilet) that I found extremely depressing, but would watch again if I were in the right mood (it opens with a potty chair tossed into a garbage bucket; think “baby shoes, never worn”). It might have been a good closer, as would Jidai-Geki. But those aren’t the rules of this game, and so your final impression of The ABCs is destined to be dick soup.

Making The ABCs of Death had to have been like watching it: It’s the X Games of horror viewing, and you find yourself sweaty and broken afterward. You want something to replenish the purity you had when you pushed play on the damn thing. You need Gatorade and electrolytes and Hannah and Her Sisters. I admire the tenacity it must have taken to meet this challenge, and in a sick way I’m glad I watched it, because a weaker woman would have taken a bath after 13 swift kicks to the occipital lobe. But there is no $20 bill on the nightstand. There is no reward. Is there ever? Maybe not, but watching Se7en or The Texas Chainsaw Massacre cuddles you in the warm blanket of a mutually agreed-upon story arc, tweaked just enough to turn its unpalatability into something you can swallow. With a good horror film, there’s always a sense that somebody is in control — maybe a sick somebody, maybe a sadistic somebody, but somebody. The feeling after having consumed The ABCs is less like having watched a movie, and more akin to having a bad trip on hallucinogens: Perhaps there is something you can pick out of it, some insight or flashes of a story you’d like to pursue another time, but the experience is marked by too many exploding veins and trips to the lavatory to want to revisit it anytime soon.