Maester Class: Breaking Down the New ‘Game of Thrones’ Trailer 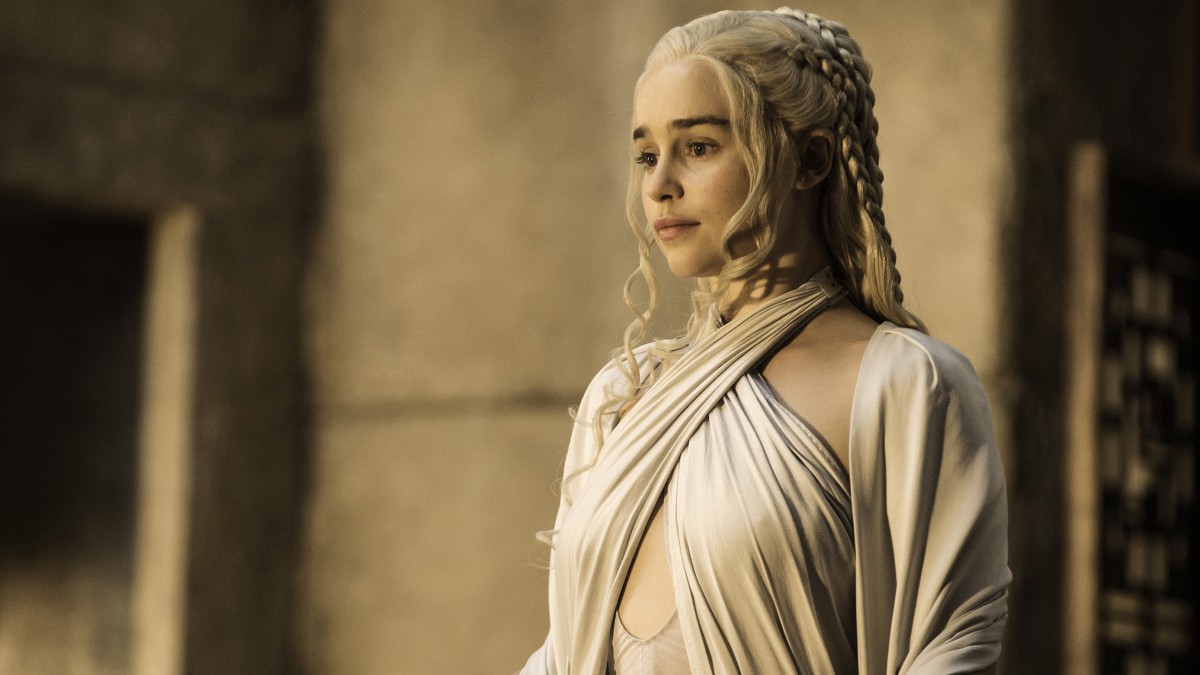 There was something cosmically perfect, like a pattern in the fabric of reality, about the latest trailer for Season 5 of Game of Thrones debuting at the Apple Watch event. Season 4 ended with Tywin Lannister, the most powerful man in the realm — who, it was whispered, was so rich that he even shit gold — taking two crossbow bolts to the gut as he sat astride the privy in flagrante deuce-drop.

Nine months later, Apple announced that the most expensive version of its long-rumored Apple Watch would come in 18-karat gold and, when paired with the flossed-out Jony Ive–crafted gold watchband, retail for the kingly sum of $17,000. Or, almost $1,000 per hour of charge that its battery holds. This is the closest thing to shitting gold as there is in this crazy old world.

I am in the midst of my spring training rereads ahead of the new season. Books 4 (A Feast for Crows) and 5 (A Dance With Dragons) get a lot of flak for the way the narrative pace slows under the weight of copious descriptions of clothing and food. This is fair, but here’s something I had forgotten since my last full read-through of Feast: It starts really, really strong. And given that this season will feature the most substantive changes from the book structure yet, I feel comfortable calling it now: Season 5 will be the best yet.

Now, let’s analyze this trailer in full-non-spoiler fashion and take a look at the disposition of pieces still left on the board.

Dany names the traditional noble houses of Westeros and pledges to break their power. Those houses are:

The Lannisters: Cersei is in King’s Landing; Jaime is somewhere else. If you’re worried about how the show will fill the chasm of realpolitik villainy left behind after Tywin’s death, good news. The power vacuum is actually the point. Seasons 1-4 were about war. Season 5 will be about the cost. For the Lannisters, that means Cersei, unmoored from any restraining influence, mucking about with the Jenga tower of statecraft that her father had so meticulously built with blood, betrayal, and coin, and upon which the prospects for peace in the realm depend.

The Baratheons: Stannis Baratheon is at Castle Black, his red witch ghost-baby mama Melisandre preparing a sacrificial pyre to R’hllor, the Lord of Light. While the war in the South has run its course, the scope of the Northern conflict is only just coming into view. Stannis has perhaps 100,000 Wildling refugees on his hands, and he’s bringing his strange fire religion to a land of ice and snow. At some point, he’s going to have to take on the newly installed Warden of the North, Roose Bolton, and Roose’s homicidal son Ramsay by bringing the battered Northern houses to his banner before the Boltons can solidify their hold on them.

The Starks: Sansa Stark appears against a field of green, a banner of House Arryn flying in the background. She was last seen in the company of Littlefinger. The most treacherous player still in the game holds the key to rallying (or subduing) the North. When last we saw Arya, she was bound for Braavos to find the source of the mysterious coin given to her by Jaqen, the face-changing assassin. Presumably, she’s arrived. Meanwhile, Jon Snow, the presumed last branch of House Stark, has to try to navigate the Night’s Watch through a maze of entanglements including, but not limited to, Stannis, Mance Rayder, and his own (understandable) urge to avenge his family.

The Tyrells: In the short time we’ve known Margaery Tyrell, she’s been married to two kings (Renly Baratheon, Joffrey Baratheon), been twice widowed, and is now engaged to her third king, the young Tommen Baratheon. In terms of raw manpower, the Tyrells are probably the most powerful house in the realm. And, their lands were untouched by the War of the Five Kings. The union of Tommen and Margaery represents House Tyrell’s third and best attempt to win royal legitimacy. Renly was more enamored of Loras, and Joff was a homicidal maniac. Tommen is young and malleable. King’s Landing is full of Tyrell soldiers, and the war-torn population depends heavily on food produced in Tyrell fields. The House of Roses is ascendant and knows it.

Daenerys Targaryen: In the far southeast of Essos, we last saw Dany struggling to balance the complexities of governance with the brutal simplicity of war, all while trying to be the mother of three adolescent, fire-breathing, eat-anything-that-moves dragons. She has a natural bond with the creatures, but the practical know-how of dragon-riding has been lost for more than a century. Dany’s power lies in her ability to command and ride dragons — and that ability is largely untested.

Roose Bolton, in voice-over, lays out the stakes in the North. His legal authority flows from his Red Wedding deal with the recently deceased Tywin Lannister — not an ideal situation, considering his house is widely reviled throughout his new territory. He has to be very careful here; the Northern families, weakened by war, won’t be in any hurry to take up arms against Roose, but they’ll surely take the first opportunity to rid themselves of him.

Stannis, meanwhile, has an imposing army … made up largely of mercenaries who are strangers in an unforgiving climate and most likely lack winter gear. Then there’s the question of 100,000 Wildling refugees sitting around basically unsecured.

Stannis and Roose will want to end things quickly, as the Northern houses will surely flock to whichever side appears to be winning. Then there are the snow zombies known as “The Others.”1 For thousands of years, the Night’s Watch has guarded the Wall against Wildling incursions. Now, Jon Snow will have to convince his sworn brothers and Stannis that the greater danger lies not in keeping the Wildlings out, but in failing to let them in.

This is our first look at the High Sparrow of the Faith of the Seven. The less said about him the better, but I’ve loved Jonathan Pryce as a heavy ever since his menacing turn in Something Wicked This Way Comes. We’ve seen the death-conquering power of R’hllor; the time-spanning, animal controlling magic of Old Gods; the mainstream Faith of the Seven; and the numerous gods worshiped throughout Essos. Religious conflict will play an increasingly important role in the story going forward. 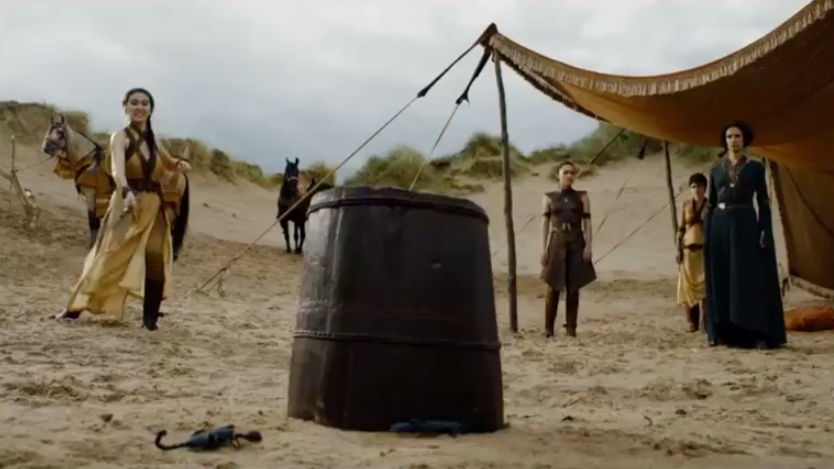 We get our first look at the Sand Snakes, the illegitimate daughters of everyone’s favorite deceased son of Dorne, Oberyn “The Red Viper” Martell. It’s probably fair to guess they are unhappy that their father is just the latest member of House Martell to come back from King’s Landing in a box after a meeting with the Lannisters. If you loved Oberyn, you will really, really love his daughters. 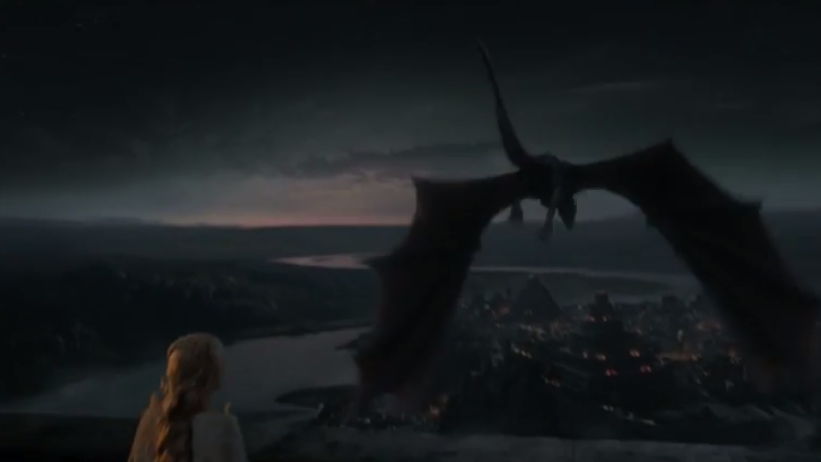 How to train your dragon.

Now, if you’ll excuse me, I’m going to go do push-ups until the April 12 season premiere.