[Previously on Mad Men Power Rankings: Don and Megan nurture a new friendship … Sally’s nose gets out of joint … Michael Ginsberg learns to understand computer code … Jim Cutler gets into a car.]

So this was Don’s capital-s Strategy all along? To crawl back into the firm on his belly, supplicate himself before the partners, and agree to play by their rules, all the while biding his time until an inevitable opportunity provided itself for him to once again prove his worth, his usefulness, his genius? Could he have known he’d eventually have a Philip Morris meeting to ambush with surgically deployed cunning? That idling on the margins of a Burger Chef pitch would offer him the chance to jump back out in front and seize a lead role?

Perhaps he didn’t have the specifics worked out. But he saw three moves ahead on the fast-food tray activity-sheet game board. He knew how to undermine Peggy’s confidence in her work with a well-timed suggestion for an “improvement,” just throwing it out there, use it or don’t. He knew that when you’re in that job, you always walk alone, clutching your coat collar and hurrying through the darkness of uncertainty, hoping to get where you’re going before someone steps out of the shadows and recognizes your insecurity. Peggy may have adopted the not-knowing, but Don was born in it. He was as comfortable in the boozy haze of a solitary Saturday rewrite session as he was at the front of a boardroom full of clients, making his wants into their wants. He knew, most crucially, how to take a nap. People always forget about the naps. The naps are very important.

And so Don dismounted his white horse outside the office, where Peggy was trapped with her doubts and her drink, and let her take her swings at him and his terrible ideas. He promised to do whatever she wanted, just as soon as she figured out what that was. Offered to make her feel good by standing behind the just-as-bad idea the fast-food slingers with the restaurants that depressed you the more you visited them would probably buy. He softened only when she admitted what he already understood in every fiber of his being: the not-knowing. And then The Strategy shifted. They could switch off playing Authority and Emotion. They could come up with a new idea together. They could make the Burger Chefs want what they wanted. They could maybe have a nap and wake up to Sunday morning streaming through the window, Sinatra playing again on the hi-fi. They could do it their way.

Uh, her way. Pretty great coincidence that song came on exactly at the time “Richard Whitman from Madison Avenue” requested it, though.

Don pushes up behind Megan on the balcony. She’s made breakfast.

“Tell me you didn’t miss this.”

“Before we eat this breakfast and go shopping … ”

“I need to know. Did that three-way magically fix everything between us?”

“Are we still talking about that? This feels good right now. Why question it?”

“I honestly have no idea what’s going on with this relationship from week to week.”

“Why do we need to analyze it that way? We’re together right now on this balcony.”

“Let’s just take for example — we’re having a pretty nice time out here, enjoying a meal together, and all the sudden you’re putting your things in a box to take back to California.”

“That might register as a mixed signal to some. Leave some things, is all I’m saying.”

“Maybe I need some of my things. We still live on opposite coasts with no plans of changing that arrangement.”

“I don’t know where this conversation is going, Don.”

“So the three-way didn’t work.”

“Three-ways never work. Or there would be no such thing as two-ways anymore.”

“Fine. We can try the three-way again. Maybe it’ll work next time.”

Don stabs a piece of French toast with a fork.

“Are we even still married?”

“Great. Don’t forget to take the fondue set back with you.”

2. The Long-Awaited Return of the Prodigal Son From Detroit, Bob Benson (last week: 7)

Let us slaughter the fatted calf. No, let us tie on the fanciest aprons and carve the plumpest turkeys available. Let us close down a major Manhattan thoroughfare and gather the ecstatic masses at curbside to watch as gargantuan balloons fashioned in the cartoonish likeness of our favorite accounts man are paraded before them in celebration of this joyous event.

We did it. We all did it. Our voices joined together, growing louder and louder each week in increasingly deafening unison, until they had no choice but to show us the episode of television they filmed many weeks ago and greedily withheld until its proper place within the season-long narrative had been reached. They heard our cries, laughed at our hysterical fears that we might never see Bob Benson again.

And then they delivered the goods, finally, right on schedule.

Our beloved Bob Benson has returned to us.

Welcome back, Bob! Nice to see you, Mr. Benson!

“Bob Benson. Beloit. Wharton. Chevy. Scratch that, Buick. Buick! Well, that’s an unexpected turn of events for old Bob Benson. You come all the way back to New York and the last thing you anticipate is the client you just bailed out of jail telling you on a cab ride back from Central Booking that GM likes your work and wants to keep you around after it moves the business away from the firm. How could you not be flattered? You’ll miss the guys in New York, sure, but it’s Buick, it’s among the finest brands in the General Motors fleet. You’ve alway felt like a Buick man, deep down, and you were always just barely passing as a Chevy guy. But they expect a certain kind of executive, and so you’d better go get a ring and put it on that Joanie’s finger and hope that you didn’t already miss your chance. Better make it two rings, in case the first one doesn’t quite fit, you never know what someone’s salt intake situation is going to be on any given day. She’ll love Detroit. She can have a mansion. She can have someone to comfort her in an uncertain world. You’re offering more than anyone ever will. It’s a win-win deal for everybody. That’s two wins. No way she turns that down. It’s a nice life. A realistic life. A Buick life.” 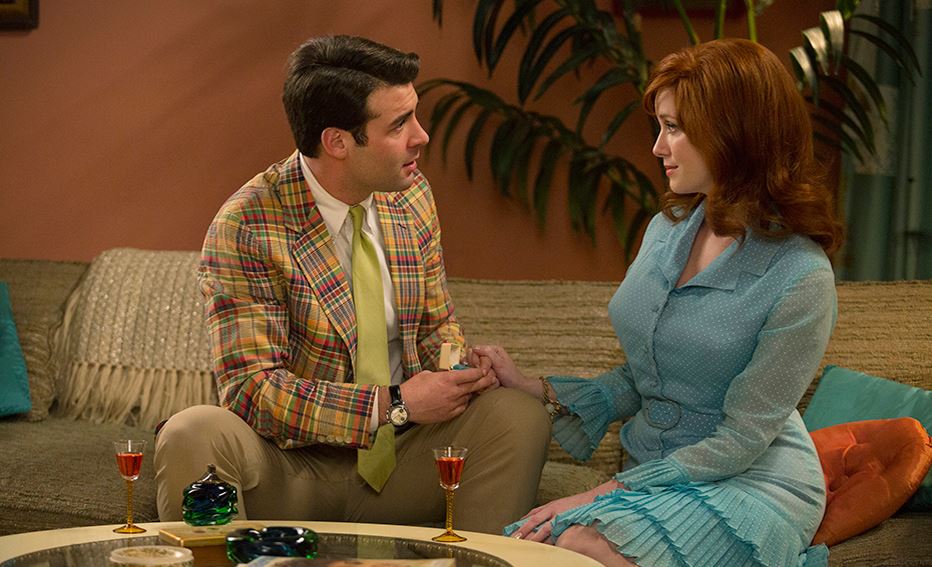 This is 30: Lying about your age even though you’ve always been terrified of being one of those women who lies about her age. Sitting in your office, successful by any measure and now the boss of your old boss, but having to find comfort in the fact that his seeming certainty was always just an act, an uneasy peace with the not-knowing. Worrying you’ve done everything wrong because you’re the one going to Ohio and Michigan and Pennsylvania, staring in the windows of station wagons, trying to understand what’s going on inside them. Remembering that the last man to profess romantic interest in you did so by presenting you with a box containing his severed nipple, which the happy-but-harried moms in the station wagons probably can’t relate to at all. Dancing with that old boss — alternately a mentor, an adversary, an underling — during yet another tipsy, emotionally charged all-nighter in which you bond over the imperfections of lives that look better from the outside, over shared fears that you’ve never done anything and don’t have anyone. Listening to Frank Sinatra sing about doing it his way, tucking your head into the old boss’s chest as you gently sway together, and wondering if you can ever do it your way as long as he’s still leading.

Bob Benson’s back and he’s brought Joanie an offer he thinks she can’t refuse. She’s pushing 40, after all, and crammed into a two-bedroom apartment with a mother and a little boy. What kind of a life is that? Will she trade love for a big house in Grosse Pointe, genuine feelings for the security of someone to comfort and take care of her? A lie for a ring?

She won’t. She’d rather die waiting for real love than make an arrangement of convenience, become the sad window dressing on a fake white-picket-fence life. There’s something coming down the road for Joanie, we can feel it. And it’s not driving a Buick.

Why not finally make him a partner after all these underappreciated years? Why not splash his image across an article in the New York Times, patting the side of the IBM 360, smug look on his face, announcing that he and Sterling Cooper Draper Pryce’s proprietary software are ready to crunch some numbers nobody really understands to take your business, product, or service to the next level? But they must take care not to reveal that prolonged exposure to Harry Crane’s wonder machine might — just might, but the chances are so negligible as to be barely worth mentioning — induce mentally susceptible Americans of Martian descent to carve off their chest-mounted data-valves to halt the flow of digitized market research through the overwhelmed vessel of their human meat-shells. Anyway, Harry’s going to make a great partner. He’s loyal, you have to give him that. The power definitely won’t go to his head. And he’s already had his valves removed, he’s got a guy in L.A. who does it for all the beautiful people. You know, just in case. You can’t totally trust the machines, no matter how happy Harry looks in the article.

Pete Campbell, halfway through Episode 705: smashes beer bottle into cake at former Cos Cob home, joins Drunken Asshole/Soon-to-be-Ex-Husband Lashing Out at a Family That Seems Much Better Off Without Him Club.

1969 was an incredible year for plaid jackets. And we still have half a season left. We can’t even imagine the majesty of the plaid jackets to come in those final seven episodes next year.

The Power Rankings hear you. Sometimes they ignore you, because that’s how the Power Rankings work: mysteriously, defiantly, seemingly without regard for managing your feelings or expectations. Stan Rizzo often seems to get short shrift here. He delivers the second- or third-best line, drops the proverbial mic, and hustles quickly off stage. And what does he get for it? A “not ranked,” more often than not. There are only 10 spots in the Power Rankings. This week Stan Rizzo occupies one of those spots. He’s not forgotten, not this time. That was a pretty killer tray liner. You could mistake it for a billboard.

It’s not a terrible thing for the continually bruised ego to be pursued by an old rival. Roger got to feel wanted. He got to feel important in a world that’s increasingly ignoring him. He got to tell Jim Hobart to stop making eyes at him, the New York Athletic Club frowns upon such things in the steam room. Well, at least until he realized what the McCann people were up to. The little light bulb went off, and the flattery was exposed: They’re afraid of losing Buick. Buick is in play.

Fellas, we got a live one here.

Our heart’s just not in it this week. This is Bob’s week. There’s too much joy and sadness to meditate, however briefly, upon Lou Avery’s coarser aspects. Bob might be gone for good, assigned to a soulless GM mansion in Detroit, forever hiding himself inside whatever family he’s able to cobble together for appearances. Are we really going to talk about Lou being a dick right now? Is that how we want to spend these final moments together? With Bob Benson slipping away?

Let’s not do it. Not this time.