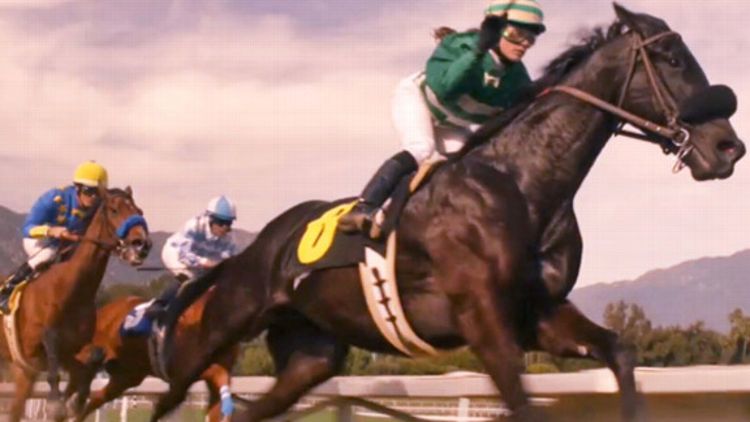 Movies are no country for old men. Or old anything, really: women, dogs, even Spider-Men. And so one of the instant pleasures of Luck, HBO’s new prestige drama that premieres in January but sneak-previewed last night, was watching hungry lions like Dustin Hoffman and Nick Nolte shake off the indignity of paycheck sequels and tabloid benders and roar and stomp like the bad old days. Even below the fold, David Milch’s horseracing series is packed with more well aged hams than a Barcelona tapas bar, from veteran mustache Dennis Farina to grizzled “that guys” Kevin Dunn, Richard Kind and John Ortiz. Even onetime heartthrob Jason Gedrick is on-board, though, at 46, he looks less like a teen idol and more like the sort of no-hoper who might stalk and murder one. All this experience and all these wrinkles add an immediate gravitas to a show about racetrack desperation set in one of those seedily picturesque parts of California they don’t show you on the postcards. Future episodes promise appearances by other talents pushed past their Hollywood sell-by date, including the ferocious Joan Allen and the immortal Michael Gambon. If nothing else, Luck is guaranteed to showcase more ravenous dinosaurs than Fox’s Terra Nova.

All the wonderfully lived-in details of the world Milch thrust us into last night — the chattering of the ticket machines, the burnt bacon of the diner, the wheezy rattle of Dunn’s oxygen tank — were elevated by the hypermasculine élan of director Michael Mann. What could have easily veered into self-parody — the steaming horses run faster and truer than even Daniel Day-Lewis — instead bursts into a celebration of style: the unsteady-cam shots of the races, all pounding hooves and hearts, are breathtaking. Of course Mann can’t resist fetishizing the deep purples of a coastal sunset or hammering down on the atmospheric Sigur Ros on the soundtrack even when his subject matter is horseshit — literally.

Happily, the hour wasn’t solely dedicated to fervent tracking of an equine bowel movement. Luck begins with the conditional prison release of one Chester “Ace” Bernstein, a gambling mastermind who took a fall for some dubious interests and now is angling for his own piece of the kugel. Our first glimpse of Bernstein — at rest, behind bars — is shocking if only because few filmmakers since John Schelsinger have so brazenly confronted us with Dustin Hoffman’s height. Yet Mann’s gamble is the best of the hour; rather than diminish the character, Hoffman’s tiny stature barely seems capable of containing all of Ace’s frustration and fury. He may assure his espresso-sipping colleague DiRossi that the tape recorder he now carries is only to aid a faltering memory, but it’s clear he hasn’t forgotten a thing about revenge.

While away, Ace has installed his Greek bodyman Gus (Farina) as a front owner of a world-beating horse. Said horse is under the watchful care of savvy, duplicitous trainer named Turo (Ortiz). Turo’s horses are so well-cared for — and, apparently, so regular — that they single-handedly (Single hoofedly? Quadruple hoofedly? We’re gonna need a bigger animal thesaurus!) make millions for the ragtag group of big dreaming lowlifes led by Gedrick and Dunn. (Turo’s so good that even he bets on himself. Something that Ace, when he’s in his cups, admits he no longer does.) And, in the background, Nolte croaks himself up to a fine lather of whiskey and nonsense playing a character named, wait for it, “The Old Man.” (In the rippling, silent haunches of a black horse, the veteran scenery chewer may finally have found the ideal scene partner.)

There’s plenty of promise here, but also potential pitfalls galore. Milch and Mann are at their best when tearing into giant, visceral hunks of machismo, violence and bluster, and there’s plenty of all three on display. But it was more than a little disappointing that of the show’s two female characters one is a fetching young rider forced to watch the action from the sidelines (and named, for now, “Exercise Girl.” Sigh.) and the other has her hand up a horse’s ass. Mann’s direction too, though immaculate, could also wind up a negative as he cedes the folding chair to other, less virtuoso lensers. (It could be argued that this first hour felt less like a television show and more like the world’s most strangely paced film.) But despite these concerns Luck feels worth the investment — maybe not as sure a thing as Gedrick’s pick six, but close to it. Milch deserves kudos here but not for taking the risk of immersing us in a fully-formed alien universe, one one with its own rules, quirks and morality. He’s done that before, both successfully with Deadwood and incomprehensibly with John From Cincinnati. Instead, what’s most striking about Luck is how it focuses on the sort of universal concerns we all recognize — the impotence of age, say, or the tricky allure of Jim Beam — but rarely see portrayed with any honesty on the screen. “Take your time, find your own stride,” DiRossi purrs to Ace after he expresses some doubts about his relevance. There’s no reason we can’t extend the same courtesy to Luck itself.

Men in Black III: Will Smith Hasn't Saved the World in a While