Lightning Round: Who Should Play Young Han Solo in His ‘Star Wars Anthology’ Film? 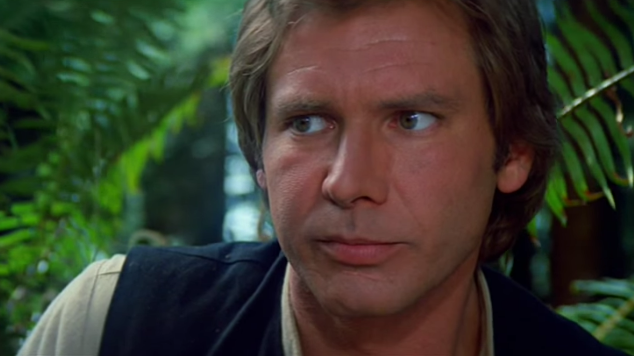 After years of anticipation and speculation, Lucasfilm1 is finally giving audiences the Star Wars spinoff film they’ve been dreaming about. No, not The Life and Times of Nute Gunray. The young Han Solo movie.

Someone is going to have to take on the mantle of the galaxy’s greatest smuggler, so we’ve asked the Grantland staff to pick their favorite sleeper candidate. Not the Chris Pratts or Aaron Pauls of the world. Who deserves this role that absolutely no one else would think of? Who was born to play this part? Yes, I know what you’re saying: “Only Harrison Ford can be Han Solo, and this is a desecration of a holy text. I am boycotting Star Wars for the rest of my life.”

Andy Greenwald: I don’t want to sound like a one-trick pony here, but isn’t Jeremy Renner the obvious choice? The man is an unstoppable franchise barnacle and thrives as the guy who walks around the green screen looking like he has no idea what the fuck is going on. (Generally because, you know, he probably doesn’t.) Also, I bet he could use the extra galactic credits. It’s not like those houses are going to flip themselves.

Wesley Morris: Allow me, please, a moment of doomsaying. This truly abysmal, powerfully desperate idea warrants reconsideration. Previous attempts at imagining the pre-middle-aged Harrison Ford have not gone swimmingly: the life of River Phoenix, the career of Sean Patrick Flanery, every Han Solo Halloween-costume-contest entrant who’s come in second to a Chewbacca or third to a Darth Vader. By playing the shock son of Indiana Jones and Marion Ravenwood, Shia LaBeouf made only the narrowest of escapes. The unlucky actor who steps into this used role steps at his peril.

Greenwald: I’m with Wesley. Maybe this is Phil Lord and Christopher Miller’s most audacious, break-the-bank-while-commenting-on-the-bank-while-posing-as-bank-tellers meta-move yet. I’m not the first person to say that one of the major problems with Hollywood at the moment is a worrying lack of male movie stars. You know, charismatic dudes who appear to have lived enough real life to make the Kessel Run seem plausible, regardless of how many parsecs it took. In their place, we get wink-wink, in-on-the-joke charmers named Chris (Pratt, Evans, Pine, et al.). By daring to cast one of these pretty emojis as Harrison Ford — no, scratch that, young Harrison Ford, the cranky alpha and omega of Gen Y masculinity! — Lord and Miller might be attempting to destroy franchise moviemaking itself for a generation or more. Imagine the possibilities! This could be the explosive payload right in the heart of CAA-WME-Marvel-Skynet’s Death Star.

I say go for it and don’t hold back. Cast Jai Courtney and watch the world burn.

Dave Schilling: A case could be made for Bill Murray to be the true urtext of Gen Y dudedom, but I’ll save that nugget of brilliance for my upcoming book, 5,001 Think Pieces on Bill Murray, coming to the back of a frat boy’s toilet near you. Instead, let me return to the actual topic at hand: Han Solo. Is Nathan Fillion officially too old and too Castle to play Han now? I guess he already played Han in a movie. Timothy Olyphant? What about a comic actor like Jake Johnson? I’m flailing for answers right now because I am so thoroughly conflicted on this subject. Replacing Harrison Ford in any of his iconic roles is just a terrible idea all around, but if it’s possible to recast Captain Kirk and the Leprechaun, I guess there’s no point in getting irritable about Han Solo. Still, this kinda sucks, right?

Alex Pappademas: I know the concept here is “Young Han Solo,” but c’mon — that’s a terrible concept. The whole point of Han Solo is that, unlike Luke Skywalker, he’s lived a cool and not-wholly-savory-or-moral life by the time we first encounter him, one that shaped him in ways we can only imagine and one whose specifics we as moviegoers could only guess at. Practically the only smart thing George Lucas’s justly maligned prequels did was resist the temptation to cram in a young Corellian pilot trying to come up in the smuggling game; maybe it was just because he’d kinda been to that well already with Young Indiana Jones, but whatever.

The point is that Han Solo, like Imperator Furiosa, doesn’t need an origin story any more than his decision to shoot Greedo needed to be retconned as self-defense. I have no need to watch Young Han meet Chewbacca or decide that the Force is bullshit or buy his first vest. I don’t need to watch a scene in which we find out that Han’s dad was a man who took great pride in his personal grooming but had to take on menial farming jobs to put young Han through space-college and ended up dying in a tragic nerf-herding accident and that’s why Han takes it so personally when someone calls him scruffy-looking nerf-herder. As Master Yoda would put it, Miss me with that shit you should. I could, however, get all the way down with an Old Man Solo movie in the spirit of Unforgiven. I guess Harrison Ford should get first refusal on the lead, but I’m secretly pulling for the guy who almost got it 40 years ago, and that’s Nick goddamn Nolte. In your heart you know I’m right.

Molly Lambert: Here’s the thing. Han Solo is great because Harrison Ford is great, but most characters written as “a Han Solo type” come off as annoying dickbags and the actors who play them are not Harrison Ford. I am referring specifically to the Chris Pratt character in Jurassic World, which was clearly written as a Han Solo/Indiana Jones type but somehow took only the zingy alpha side of Ford’s persona without any of the underlying insecurity that makes those roles great. Han is not just a one-dimensional scoundrel. The only true Han Solo is Ford, whose natural unaffected un-actory quality made him feel like a regular dude who just happens to be really, really hot and smart and funny. So the only answer is to find an unknown, a guy with a couple of Law & Order guest shots under his belt and some carpentry experience, and make him the new Han Solo. Or … if all things really are equal, the only actor who could possibly play young Han Solo with the requisite lightness of touch, roguish coolness, and excellent bemused facial expressions is Mackenzie Davis, who proves her suitability every week on Halt and Catch Fire.

Ben Lindbergh: In his Expanded Universe origin story — which was wiped away when Lucasfilm cleared the floor for a clone army of screenwriters — the young Han Solo had to fend for himself from an early age, enduring harsh treatment from a cruel, uncaring world that eventually drove him to the outlaw life. Few young actors can identify with Han’s hard knocks. But Jake Lloyd has lived the part, from the moment his entertainment-industry parents put him to work, to the taunts of his schoolmates after Phantom Menace,2 to the day last month when he treated I-95 like the last leg of the Kessel Run, eluding the authorities with a “never tell me the odds” attitude toward traffic.

Sure, Lloyd had his chance to play a pivotal role in the series, and the results were less than stellar. As Anakin, though, he was only 8, an age at which it’s common for people to be bad at things they get good at later. And consider the script: Lloyd can hardly be blamed for failing to land lines like “Are you an angel?” and “I’ll try spinning — that’s a good trick.” Granted, Lloyd has given up acting, blamed the franchise for making his life a living hell, and destroyed all of his Star Wars swag, presumably on a Skywalker-style funeral pyre. But hey, Han left the Alliance when he had a price on his head. All that’s missing from Lloyd’s Solo-esque arc is one redemptive role, a career equivalent of the scene in which the Falcon swoops in just as Vader gets a laser lock on Luke. This movie might be that moment. Come on, Miller and Lord: Let’s blow this thing and go home.

Mark Lisanti: I’m going to choose to interpret “young Han Solo” in whatever way makes Ben Mendelsohn a viable choice — whether that means “younger than whatever advanced space-age Harrison Ford is in The Force Awakens” or “let’s dedicate a slice of the CGI budget for some facial laser-resurfacing.” Han Mendelsohn’s not going to be perfectly cut from your Ford-carbonite mold. He’s going to be sweatier. He’s going to be grimier. He’s going to be hanging out at the intergalactic marina on a bog planet3 when you meet him, wiping off a grease-slicked part of the crude hyperdrive he’s trying to retrofit to his bog-speeder while talking your ear off about a bounty that got away last week. And there’s a little more menace in Han Mendelsohn’s smirk. No one’s asking if he shot Greedo first. They’re asking if he stabbed Greedo in the gut and let him bleed out under the cantina table because he didn’t like the look in one of his lizard-ass eyes.

Mallory Rubin: Is our collective natural instinct to like the idea of anyone but Harrison Ford playing Han Solo? No, of course not. But was our collective natural instinct to like the idea of a magical pie-maker bringing dead people back to life along with bruised and rancid fruit? No, and how wrong we were! There’s a man out there with the “underlying insecurity” Molly mentioned, and that man also happens to possess the luscious locks and crooked smile that can’t be bought like a smuggler’s vest. I speak, of course, of Lee Pace, who may not be young in years, but who’s definitely young in spirit, and who’d look as comfortable next to a Wookie as he does next to a humming hunk of IBM machinery. The only downside to casting Pace is that he’s 6-foot-5. New Chewie’s going to need to be 7-10.

Holly Anderson: The case for Kevin Corrigan: Literally anyone can be made to look younger than A New Hope–era Harrison Ford; ILM could make the Grail Knight in Last Crusade look younger than Harrison Ford. Corrigan was on The Black Donnellys, so he knows about taking perilous career chances. And he’s fresh off one of the summer’s best surprises, Results, a movie that (not unlike a Solo solo film) sounds like it could be done a million different bad ways but (uh, maybe unlike a Solo solo film, maybe not) ended up being done the one great way. Corrigan had to do quite a bit of working out onscreen; the driving plot engine of Results is his character’s desire to get in good enough shape to be able to take a punch. It’s like a real-life backdoor pilot for his body in the Star Wars universe! Young Harrison Ford is gonna have to take a lot of swings to the face. Like, a LOT.

'Do You Like Prince Movies?' Podcast: 'Magic Mike XXL' and 'Terminator Genisys'

The Deranged Knight: How the Latest ‘Arkham’ Game Embraces the Darkness and Gets Batman’s Psycho Side Right