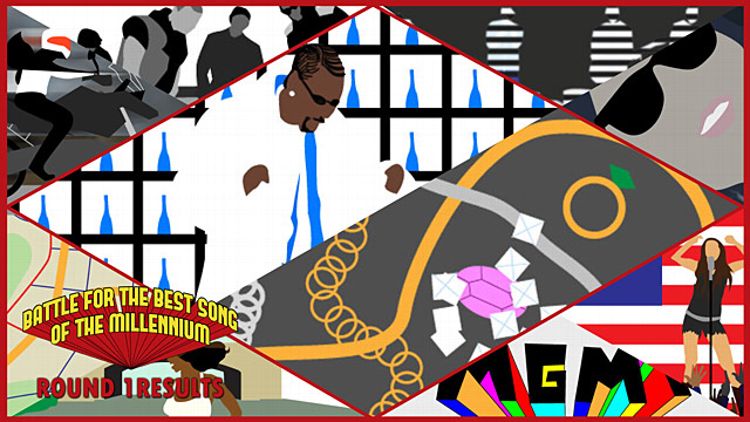 The first day is always the hardest. But we’re through it now. It can’t hurt us anymore.

That’s a lie. As a now-six-time Grantland Bracket participant, as someone who has watched good soups die facedown in the minestrone muck and stood by impotently as his harpoons deflected off his white whale without leaving so much as a second blowhole, I can tell you that the hurt never truly goes away. It fades some, yes, but it lingers forever. Ask the architect about how well he sleeps after the teddy-bear hospital he designed collapses upon an urgent-care department full of rainbow-tummy aches. He will tell you he hears only the terrible rending of fuzzy limbs, the crying of the Ruxpins. We all hear them now. They sound a lot like Skrillex.

So, since we’ve decided we’re just telling the uncomfortable truth here, everything about Day 1 has been awful: The choices were engineered to be nigh-impossible, the results crazy-making, the outcry pitched somewhere between “colicky baby with an undiagnosed breast-milk allergy” and “banshee stubbing its toe on a volunteer firehouse siren.” We know this going in. And yet we come back for more — hold on, “Jesus Walks” just came up on the Spotify playlist. Holy crap, what a JAM. 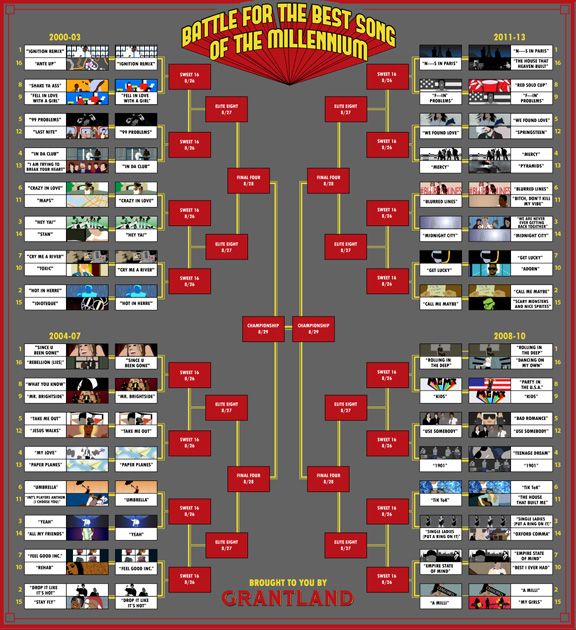 Where were we? Oh, right: This was some rough going. We asked you to make the tough calls. So you did. All that’s left for those of us on this side of the screen is to try to make some sense of them, to learn the lessons you’re trying to teach us through your clicks, and then do the whole thing over again until a winner is crowned. Let’s get to the results and the learning. You can scroll down to the bottom if you want the full list of winners.

Not 24 hours ago, one of our own kenneled his direwolves outside, sat down to spin a very personal yarn over some bowls of bread and salt, maybe requested that favorite tune from the house bards. You repaid his trust by going all Red Wedding on him. Stab stab stab, “Ante Up.” R. Kelly is King of the North, urinating his name upon the smoldering ruins of House M.O.P.

This is what we get for opening up to you. It won’t happen again, except maybe four or five more times. We have a lot of feelings and stuff to share, even if your response is a fatal knifing of all we hold dear. You can’t make us stop caring. Probably.

No. 1 Seeds Just Go Out There and Win. It’s What They Do.

It’s Better to Be in da Club Than in da Dining Room, Feeding da Kids Mac and Cheese

As a Dad Rock American* besieged on all sides by hip-hop fans each and every workday, maybe I held out a silly hope that things would turn out differently, that a groundswell of Jeff Tweedy partisans might rise up from the comments sections of every NPR message board on the Internet and overcome the tyranny of the iconic club-banger. Nope. Wasn’t gonna happen. I will also add here that I rode harder for “Heavy Metal Drummer,” but that was just as doomed a campaign. Everyone I work with is 17 years old and owns 300 pirated copies of the same Lil Wayne mixtape. I might as well have suggested “Sunshine of Your Love.” Cream. The late ’60s. Just kill me.

[*This is where I disclaim that the term “dad rock” is awful and insanely misapplied to a band as great as Wilco. But this is a bracket game, so that was a shortcut to letting you know how old I am. Just kill me.]

In the Case of Former Mouse-Eared Sweethearts Justin Timberlake Vs. Britney Spears, You Are Bro-ing Down With Timberlake

It’s entirely possible this did not break down along gender lines, everybody just believes “Cry Me a River” is a better song than “Toxic,” and nobody cares that they once loved each other. But they did, and it was beautiful, and then they had a fight, and JT wrote a song about her, and you picked it. Justin wins again. Sad-Mouseketeer emoticon.

“Toxic” might be the better song, btw. It’s closer than this vote.

You Have Had Your Fill of Katy Perry

Very interesting! It’s hard not to wonder what might have happened had we chosen “Lisztomania,” over which a considerable and baffling amount of blood was spilled in the Grantlandome. Would you still have used Phoenix as the apparatus with which to eject Katy from the competition, like so much cream from breast-mounted Reddi-wip cannons? We’ll never know. Or will we?

You Are Sick of Taylor Swift

If two’s a coincidence and three’s a trend …

Enough With the Miley

… then what to make of the systematic removal of FOUR, count ’em, FOUR, count ’em again, STILL FOUR incredibly successful, but perhaps tragically omnipresent female pop singers from the tournament?

OK, a lot of dudes read this website. And all of them are huge Phoenix, M83, and MGMT fans.

Country Music Is Doomed in This Tournament

We tried. Sort of. Tough matchups. (Because they’re country songs.)

Saw one coming. Not the other one.

Skrillex Really Does Sound Like Teddy Bears Dying in the Clutches of a Sad Robot Who Never Learned How to Be Gentle, Now That We Think About It

This might be more of a personal lesson than one that’s of any use to you.

FULL ROUND OF 64 RESULTS BELOW.