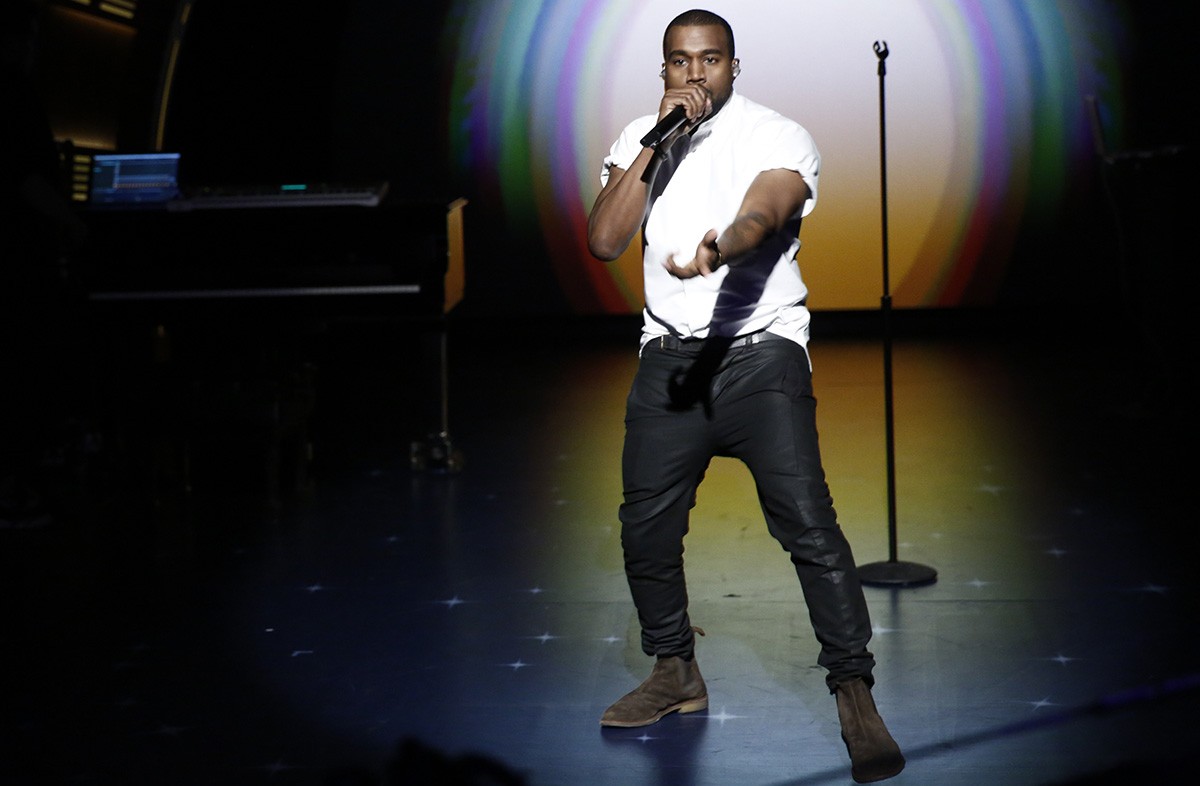 On Tuesday, Roc Nation announced that Kanye West was postponing concert dates in Australia to complete work on his next album. Some outlets (most notably Stereogum) felt it necessary to point out that this was not an April Fools’ joke. Why would anyone assume it was a joke? For one thing (I guess), West’s most recent album, Yeezus, came out just nine months ago. Given the abruptness of that LP’s release, it’s possible that West’s next record could come out in a month, in a week, or even tomorrow, for all we know.

Such a fast turnaround on the follow-up to one of the most polarizing pop albums in recent memory might strike some as implausible. But, as Rolling Stone pointed out, West hinted in December he would be swiftly issuing a sequel to Yeezus, telling architect Jacques Herzog at an art festival in Miami that he envisioned his next LP being a Yeezus-like effort with eight songs and a spartan aesthetic.

Then there’s West’s own discography, where there’s scarcely any light between albums. From 2004 to 2013, West released seven LPs. Of the handful of years when he didn’t put out a record, only 2009 was relatively uneventful. In 2006 (the year between Late Registration and Graduation), he issued a mixtape and two non-album singles, while in 2012 (between Watch the Throne and Yeezus), he was the biggest star on his own GOOD Music compilation, Cruel Summer, which spun off several hits.

Chances are, those who were most incredulous about the new Kanye album news grew up (as I did) on ’80s and ’90s pop. Back then, it was customary for superstars to take three, four, even five years between albums once they reached a certain level of prestige. Consider that Janet Jackson released her first three albums between 1982 and ’86, culminating with Control, her first blockbuster, which sold five million copies in the U.S. alone. Jackson’s next LP, Rhythm Nation 1814, came out three years later. Her fifth album, 1993’s janet., arrived four years after that, and 1997’s The Velvet Rope another four years later. All told, Jackson’s first three albums came out in less than half the time it took her to release her next three.

Many of the iconic pop stars of this era — Michael Jackson, Madonna, George Michael, Bruce Springsteen, and U2, to name several examples — have similar trajectories. They each put out new records every year or two early on in their careers, and then a lot less often once they became superstars. It doesn’t take a genius to figure out why this happened: When commercial radio and MTV exerted a level of control over the pop audience’s listening habits that seems unimaginable today, pop stars could systemically spin off songs from the same record for years while circling the globe on lengthy support tours. By the early ’90s, bands like Guns N’ Roses and Metallica were conducting lucrative three-year concert runs on a single album cycle.

If you were a fan of those mega-artists, you were conditioned to wait a long time between records — even as you changed schools, peer groups, and cuffed-jean preferences in the intervening years — with the expectation that when that record finally came out, it would be a major statement often accompanied by a full-scale reinvention of that artist’s persona.

Obviously, times have changed. My unscientific survey of discographies by contemporary pop stars reveals unsurprising truths about the restless prolificacy that modern stardom requires. It’s one thing for Justin Bieber and One Direction to constantly service their fleeting fan bases with new product annually (sometimes biannually). That’s always been expected of teen idols. But established pop figureheads like Rihanna (seven albums between ’05 and ’12), Beyoncé (five albums between ’03 and ’13), and Katy Perry (three albums between ’08 and ’13) now have tireless work ethics. And that’s not counting the various guest spots on other people’s songs that even the most rarified superstars are expected to regularly avail themselves for.

Prince and Justin Timberlake are the exceptions that prove the rule in their respective eras. Prince released so much music in the ’80s and ’90s that it eventually created conflict with his label, Warner Bros. Meanwhile, Timberlake’s ability to take seven years between 2006’s FutureSex/LoveSounds and the first volume of his 20/20 Experience albums in 2013 set him apart from his peers as the biggest pop star of his time.

Taking a longer view of pop history, the long waits between records that were common in the ’80s and ’90s now seem like an anomaly. The current pop era is reminiscent of the ’60s and ’70s, when artists routinely put out a new album (or multiple albums) every year. Then as now, no artist can take for granted that an audience will stick around if you make them wait too long. Pop changes too rapidly now for sitting out to be a prudent career choice. What’s interesting about Kanye West (and truly exciting, if you’re a fan) is that his prodigious output has enabled him to remain on pop’s cutting edge without diluting the momentousness of each record’s release.

After Yeezus, which I loved, I’ve often wondered what in the hell Kanye is going to do next. Yeezus is not an album that gives you a lot of options — it’s hard to imagine West sounding angrier or more aggressive, and it would probably be foolhardy for him to even try. But going in the opposite direction, toward the more maximalist sound of his older records, might seem like a retreat with inevitably diminished returns. West appears to have produced himself into a corner. Of course, that’s only my perception as a person who is not a brilliant pop artist. I’m thrilled that he does not seem to share my weariness over whatever’s next, and instead is continuing to move fearlessly forward.

The Impossible Dream of 'Jodorowsky's Dune'

Do You Like Prince Movies? Podcast: ‘Noah’ and ‘House of Cards’