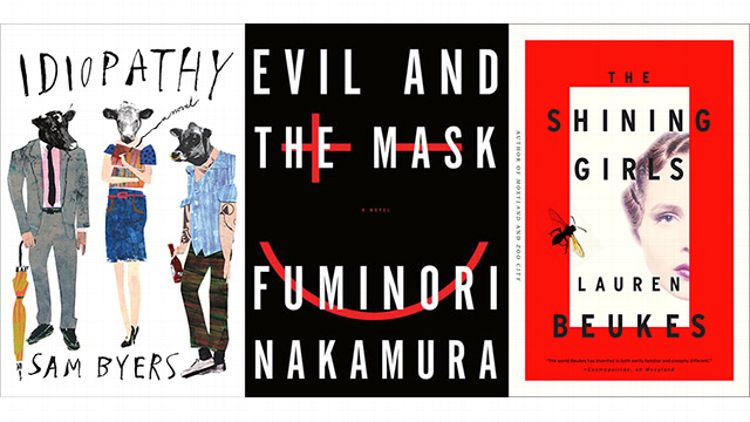 According to the epigraph, idiopathy is a “disease or condition which arises spontaneously or for which the cause is unknown.” For the three central characters of the book, the conditions could be loneliness, uncertainty, or love. But the more literal connection in Sam Byers’s debut novel is a bizarre epidemic affecting the country’s cattle — a comic thread of widespread misperception that sets the stage for Idiopathy.

After Katherine’s ex-boyfriend Daniel enters a new, pedestrian relationship, Katherine becomes embittered and starts on a tear of meaningless affairs. The two are forced to reconnect when an old friend, Nathan, returns from rehab and suggests a reunion. Things go poorly. Katherine swears a lot. Everyone is unhappy, and no one can understand why.

The Time cover story about millennial narcissism is just the latest in a long and overwritten narrative about this generation’s solipsism. But these lengthy articles can never get past the idea that Facebook and cell phone selfies are the problem. With Idiopathy, Byers is satirizing something deeper: the idea that we are all possessed by our desire to be happy, that maybe it is that desire and self-doubt that keeps us so unhappy.

Byers’s characters — foul-mouthed Katherine in particular — are unlikable but oddly sympathetic. And while this is a character- and dialogue-driven novel, drawing you in with a cruel and clever wit, Byers reveals his broader ambitions deep into Idiopathy. Late in the novel, Daniel says that “[i]t doesn’t matter if you’ve done anything wrong or not. It’s what people think that counts.” But Daniel is speaking about his PR job, not any personal revelation. By creating such distance between the reader and the characters that inhabit his book, Byers gives us the space to realize how ridiculous and selfish they can be. And perhaps the insinuation is that we should create that same space for ourselves, to reexamine how our desire to be happy might be preventing just that.

Evil and the Mask, by Fuminori Nakamura

Last year, I recommended Fuminori Nakamura’s The Thief, a bleak, existential thriller about a pickpocket whose fate, it turns out, is never really in his hands. Evil and the Mask is the latest of Nakamura’s books to be translated into English, and this one is far darker, more philosophical than The Thief. There’s a similar deterministic thread that runs throughout Evil and the Mask, but the twisted question here is, are we born evil or made evil? More specifically, for 11-year-old Fumihiro Kuki, am I my father’s son?

The book opens with young Fumihiro being told, by his dad, that he was created to be “a cancer on the world.” OK, cool, Dad, is basically what Fumihiro thinks, and runs along. He begins having a romantic relationship with his (thankfully) adopted sister Kaori (kind of like in Arrested Development); later, when his father threatens Kaori’s safety, Fumihiro takes it upon himself to lock Dad in the basement until he starves to death. It turns out this was always his father’s plan the whole time: to take advantage of Fumihiro’s feelings for Kaori and force him to do something terrible (holy shit, is this where Arrested Development is headed?).

The novel jumps ahead to Fumihiro as an adult, where years after being separated, Kaori enters his life again, and a now matured “cancer on the world” is recommitted to defending the one person he cares about. (Oh, also, Fumihiro has, for convoluted reasons, had Face/Off-style facial reconstructive surgery.) On one hand, Fumihiro’s protective instinct over Kaori is his only redeeming quality; on the other hand, it’s also what motivates him to do terrible things. At one point, even his protectiveness of Kaori is questioned.

“Unconsciously, you want to create maximum evil. That means completely destroying the one thing that is the most valuable in the world to you. In other words, Kaori. To do that, you placed her on a pedestal above all else, just so you could harm her one day. You don’t love her. You fell for her so you could hurt her.”

Dark stuff, right? This is just one of the moments in Evil and the Mask that is deliciously twisted. Nakamura is less interested in making his novel an ethics test than a morality distorter, bending the line between what is good and what is evil until it nearly breaks. It’s impressive how a book so dark can be so much fun.

TL;DR: An existential thriller with a dash of Les Cousins Dangereux.

The Shining Girls, by Lauren Beukes

What’s more terrifying than a serial killer? A murderer who can TIME TRAVEL!

But actually, The Shining Girls is pretty scary: Harper, a Depression-era thug, stumbles upon a house that allows him to step into different eras. Once he arrives, he finds unremarkable objects and feels compelled to find the women to whom they belong (they are always women, but more on that later). As soon as he finds these shining girls, he murders them, then slips back, unnoticed, into the past — until one girl, Kirby, survives Harper’s attack and vows to track down her assailant.

There is no shortage of thrillers about men who murder women (as evidence of how on-the-nose it can be, there’s a James Patterson series called Women’s Murder Club, and let me tell you, it’s not women’s revenge like The First Wives Club). But the shining girls all tend to be women who subvert traditional gender norms throughout American history. In this way, Harper literally represents male oppression — as a hedonist, misogynist, and murderer. (OK, this is pretty on-the-nose, too, but he can also, uh, time travel.)

The Shining Girls’ thriller elements are stronger than its science fiction (I wished Beukes had established more rules about the House to keep the novel’s metaphysical elements consistent). Still, it’s the portrayal of Kirby that sets this book apart. She’s both vulnerable and brave, understanding of her limitations and unafraid of pushing herself past them.

Beukes shares all the gory details of the murders, but the violence never feels gratuitous. It’s there to frighten the reader (it does) and never succumbs to an inappropriate sexualization of violence against women (à la The Girl With the Dragon Tattoo). Beukes is subverting gender and genre and doing so with such ease that you might not even notice how smart The Shining Girls secretly is. But that’s probably because you’re too busy being terrified.

It's a Slow Star Wars News Week, So Thank the Maker for Those Florence Rumors