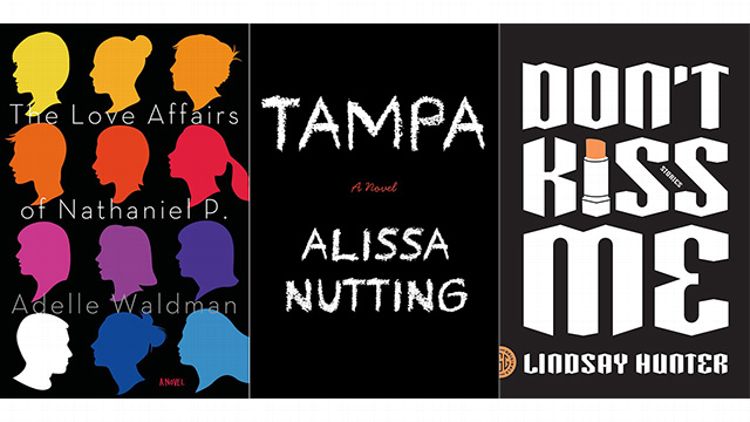 The Love Affairs of Nathaniel P., by Adelle Waldman

Adelle Waldman has set out to answer an age-old question: Why are men jerks, and why do women date jerks? To find the answer, you’ll have to endure the book’s titular hero. He’s the tortured-artist type of jerk and also the object of envy for every elitist literary snob: intelligent, tall, good with women, and just sold his first book for six figures. Before we go down the road of arguing about the importance of character “likability,” let me assure you that Waldman writes him with such humor and self-awareness that his non-problems become almost endearing.

The novel focuses on Nate’s relationship with a woman named Hannah. He’s attracted to her because she is not immediately attracted to him — even if her looks are just a seven on a scale out of 10. Some of the book’s best moments expose men as jealous, catty, and superficial:

When Nate had told Jason he was dating Hannah, Jason’s response — “she seems like a nice girl” — had been so bland that Nate had silently seethed, hating himself because the number seven flitted across his mind. He hated himself even more as he heard himself extol Hannah’s virtues: she’s really cool! fun! smart!

But the best moments of Nathaniel P. come toward the end, when Nate and Hannah’s relationship dissolves into a series of passive-aggressive arguments and psychic wounds. It’s in this second half of the book that Waldman is able to take the specific experiences of literary Brooklynites and make them universal. The way Waldman structures Nate and Hannah’s arguments feels akin to fight choreography: vicious and violent, yet almost beautiful in its meticulousness. This is Waldman’s debut, but she brings Franzen-level domestic chaos.

My favorite passage from the book features Hannah chastising Nate for his self-pitying when he explains why he is bad at relationships:

“I feel like you want to think what you’re feeling is really deep, like some seriously profound existential shit. But to me, it looks like the most tired, average thing in the world, the guy who is all interested in a woman until the very moment when it dawns on him that he has her. Wanting only what you can’t have. The affliction of shallow morons everywhere.”

This is the most daring proposition of the book: If Nate’s problems are not special, then what makes this book special? That’s the hard part about talking about your relationships, isn’t it? Your problems are just like everyone else’s, except they feel unique and singular to you. Waldman has evoked exactly the same thing here, a magnificent trick of making distant experiences feel like familiar heartaches.

TL;DR: Look at these fucking hipsters. (No, really, look at them. They are worth paying attention to.)

In middle school, I bought a KoRn CD from HMV and hid it under my bed so my parents wouldn’t know I had an album with a “parental advisory” warning on it. I’d listen to it loudly when they weren’t home, feeling satisfied that I had a dirty secret I could indulge in.

I thought about this a lot while reading my advance copy of Tampa, which features a warning on the cover that reads “Caution: Explicit Content.” It’s warranted, too: If you’re the sort of reader who will never get past a lot of filthy sex scenes between a 26-year-old teacher and her 14-year-old student, you might want to skip the rest of this review.

In an extraordinary opening chapter, narrator Celeste Price laments that her conventionally attractive husband is “roughly seventeen years past [her] window of sexual interest.” Celeste has taken a new job as an eighth grade teacher with the intent of finding a young boy to seduce. She finds a lover in her quiet, earnest pupil Jack Patrick, and their copulation is described in graphic detail.

The setup with Celeste as a teacher also makes for some easy literary parallels — the class is reading The Scarlet Letter  — but Tampa is better positioned as a modern Lolita. This is a story from the point of view of a pedophile, and like Nabokov, Alissa Nutting uses her novel to allow what at first seems provocative to reveal itself as something horrible.

Celeste shows some signs of Humbert-level rationalization (“I could smell the mint chewing gum on his breath — he’d indeed prepared himself for a make-out session. Could consent be any more transparent?”), but it’s actually the self-confidence and shamelessness she demonstrates early on that telegraphs her downfall. Tampa is the portrait of the worst kind of monster: careful, manipulative, and wickedly selfish. Celeste has a number of rules about picking her prey (e.g., “Extreme growth spurts or pronounced muscles were immediate grounds for disqualification. They also needed to have decent skin, be somewhat thin, and have either the shame or the preternatural discipline required to keep a secret”), and like many affairs, the confusion between lust and love speeds Tampa along to its excellent, inevitable conclusion.

The finished hardcover copies of Tampa don’t bear a warning label. The covers are made of a strange felt material. The texture feels uncomfortable in the hand, though after holding it for a while you find yourself touching it in funny ways — the perfect cover for the summer’s most controversial book.

I have a tendency to underline things I find clever as I’m reading (a habit from having a liberal arts degree and reviewing books for a living). Here are a few sentences I underlined from Lindsay Hunter’s short-story collection, Don’t Kiss Me:

In truth, I had to restrain myself from highlighting entire passages. Don’t Kiss Me is an exploration of voice, rhythm, and tone. Its best moments elicit immediate reactions — sometimes terror but, more often than not, laughter. Don’t Kiss Me also represents what a lot of people are afraid of when they hear the phrase “experimental fiction.” Hunter’s work is rarely longer than a few short pages, centered on sensations rather than stories, occasionally surreal, and often has strange structures or formats.

In fact, my favorite story is “Our Man,” a two-column puzzle that turns into a sticky piece of detective noir. The story jumps between multiple characters — like a tonal Rashomon — set into motion by a crime scene with one woman, two severed ears, and lots of blood. At first this lyrical mystery is disorienting, but as you slowly start to figure out how to read it, you’re also piecing together the crime. It’s Don’t Kiss Me‘s longest, most ambitious story, and if there are any complaints to be made about the book, it’s that I wish there were more stories like “Our Man.”

I’ll admit, there is something frustrating about fiction that is deliberately opaque, but Don’t Kiss Me pushes the fringes of what the medium can do at a base level. Hunter’s darkly funny stories speak to the ugliest, most visceral part of you, a part that you may not even recognize.