John Oliver’s Leaving ‘The Daily Show’ for HBO, and Somehow Everybody Wins 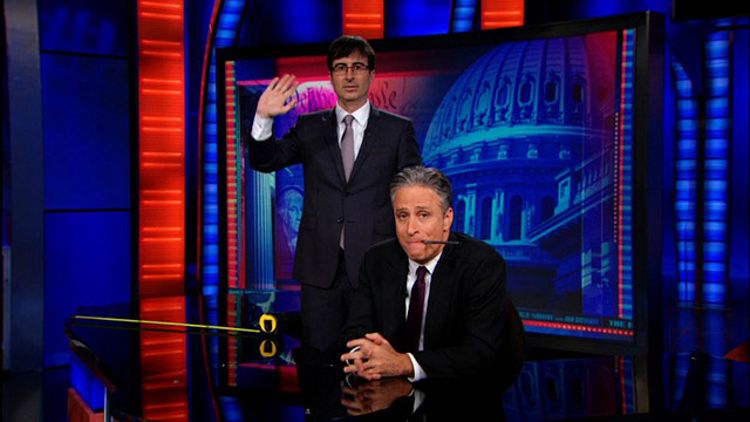 Yesterday it was announced that John Oliver is declaring his independence from The Daily Show and taking his talents to HBO, where he will star in a weekly “topical news” comedy series to air on Sunday nights. For fans of Oliver, this was great news. For fans of “topical news” comedies, this was great news. In fact, this was pretty much great news all around! To illustrate, let’s break down the winners and the other winners of the Oliver/HBO deal.

Obviously. But still: What a year for the bespectacled Brit! When I had Oliver on my podcast this summer, just before he began his guest-hosting gig on The Daily Show, he seemed primarily concerned about not wrecking anything. Three months later, the only thing drastically transformed was Oliver’s own reputation. Oliver did much more than keep Jon Stewart’s seat warm while he was off directing a movie in the Middle East. Oliver was wildly, laceratingly funny, bringing a completely new perspective to a show that was doing just fine.

Making the move to HBO now, before anyone gets too comfortable seeing Oliver returned to second banana (pronounced as they do in Blighty, with the emphasis on the second “na”) status, is the best possible thing for his career; the proverbial iron will never be metaphorically hotter. Rather than chasing fame in L.A. or trying to fit his round head into someone else’s square idea of comedy, Oliver now gets to stay in New York and have the pleasure of being extremely well-paid to do pretty much what he’s been doing — except now he only has to do it once a week and he gets to see his name spelled correctly in the title. (Who spells “John” without a haitch, anyway?) Even better, his new overlords at HBO don’t really worry much about pedestrian concerns like “ratings.” Assuming the show is funny (and this summer proved it will be) and American politics remain insane (and this summer proved they will), the new John Oliver show could run forever.

As network president Michael Lombardo put it, “We weren’t otherwise searching for another weekly talk show” but circumstances changed after watching Oliver all summer long. Although Oliver can probably now afford a proper haircut, the expense here on HBO’s side is minimal: The cost of a weekly talk show is tiny compared with the hefty price tags of original scripted programming — even the kind that doesn’t involve CGI dragons. And, yes, HBO already has Bill Maher doing something vaguely similar on Friday nights. But Mahr is 57 years old and alienates many with his pointed shtick. Oliver, by contrast, is a boyish 36 and brings with him all of the young-skewing goodwill generated by The Daily Show, not to mention, HBO hopes, some of its audience. (It’s also extremely smart to position the show on Sunday away from any direct competition with Stewart. Die-hard Daily Show fans can consider the new show either a palate cleanser or an amuse-bouche, depending on how they organize their weeks.) HBO generally invests in hugely expensive stars to keep its lifeblood of buzz roaring. This is a rare circumstance when it is buying high on Oliver’s celebrity but paying relatively little. And best of all, the money can be considered a wise investment in the post-Maher future.

Stewart is, by all accounts, an incredibly nice and generous person. (You know who constantly says this? John Oliver.) I’m sure he was in no way threatened by the success of his handpicked usurper — he was probably thrilled. But this is still the best possible outcome for the 50-year-old host. He gets to retain his status as kingmaker — Oliver now joins Steve Carell and Stephen Colbert as eagles who have flown proudly out of Stewart’s nest — while also retaining his crown. I’m not saying there would have been a quarterback controversy on The Daily Show with Stewart had Oliver stuck around (I mean, it wasn’t called The Green Bay Packers With Brett Favre), but there might have been some idle chatter, particularly if ratings dipped or Piers Morgan was accidentally elected president, thus demanding a Britisher’s point of view on things. This way everyone remains friends, free to live their best lives, and all hands stay clean.

Yes, The Daily Show is losing one of its longest-tenured, most-loved, and very versatile performers. Yes, this probably means the break room will go back to stocking boring old Lipton instead of PG Tips and that Jessica Williams will have to find someone else to agonize over Aston Villa results with. But in the long run, change is good for a franchise as successful and durable as The Daily Show. Like Saturday Night Live, the show is elevated by the injection of fresh blood (though, unlike SNL, it maintains a consistent level of quality because of the long tenure of the man in the big chair). And also like Saturday Night Live, part of the allure and prestige of The Daily Show comes with its reputation as a factory for future comedy stars. But since Ed Helms flew the coop, Daily Show alums have had mixed results on the national stage. In fact, the trend of late has been moving in the opposite direction: current correspondent Al Madrigal did turns on two failed sitcoms before packing his bags and heading east for a steady, if lower-profile gig interviewing clueless regional politicians. Seeing Oliver use The Daily Show as a launching pad instead of a landing strip helps restore the show’s luster, and at a good time, too: 2014 is the midpoint between U.S. presidential elections. The Daily Show now has two years to tinker with its chemistry before everyone starts paying close attention again.

WINNER: Directing a Movie in the Middle East