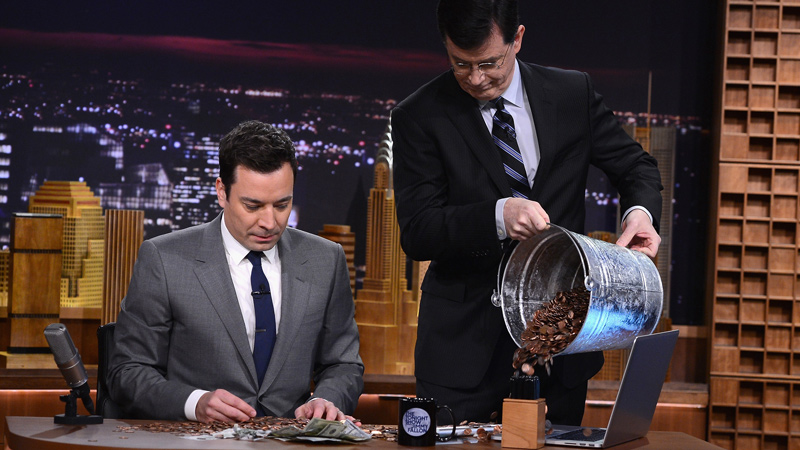 The Tonight Show returned to New York City on Monday after 42 years vacationing in L.A. It was a strong opener, hitting the sweet spot between a premiere, a something-for-everyone episode of Jay Leno’s Tonight Show, and a Jimmy Fallon installment of Late Night. We got hyper-specific, often funny jokes about Olympians. We saw a variety of impressions — Vladimir Putin, stoner snowboarders — and a show opener filmed by Spike Lee. Here’s what else the first episode of The Tonight Show Starring Jimmy Fallon had to offer.

Fallon reminded us that celebrities love him.

The man has gotten Bruce Springsteen to play his 1975 self and perform a song about New Jersey governor Chris Christie. So was it a surprise that, after referencing a $100 “Will Jimmy ever really get to host The Tonight Show” bet with an anonymous “buddy,” Fallon was met with a string of celebrities begrudgingly putting money onto his desk? No way. But it was fantastic. First came Robert De Niro — in, out, not a word spoken — and that would’ve been enough to seal the gag. But then came Tina Fey, Joe Namath, Mariah Carey, Rudy Giuliani, Tracy Morgan, Joan Rivers, Kim Kardashian, Seth Rogen, Lindsay Lohan (Mean Girls reunion backstage, heyo!), Sarah Jessica Parker, Mike Tyson, Lady Gaga, and Stephen Colbert with a bucket of 10,000 pennies. Might as well cancel this year’s Thanksgiving Day parade, Macy’s. Can’t top that.

U2 performed atop Rockefeller Center, 70 stories above New York City.

The song itself changed zero lives, but man, it was like something out of a movie. This Tonight Show is aiming high — and that’s not a stupid altitude pun. (Also, superior to the rooftop performance was a desk-side acoustic jam where Bono changed the chorus of “Ordinary Love” to “Questlove.”) 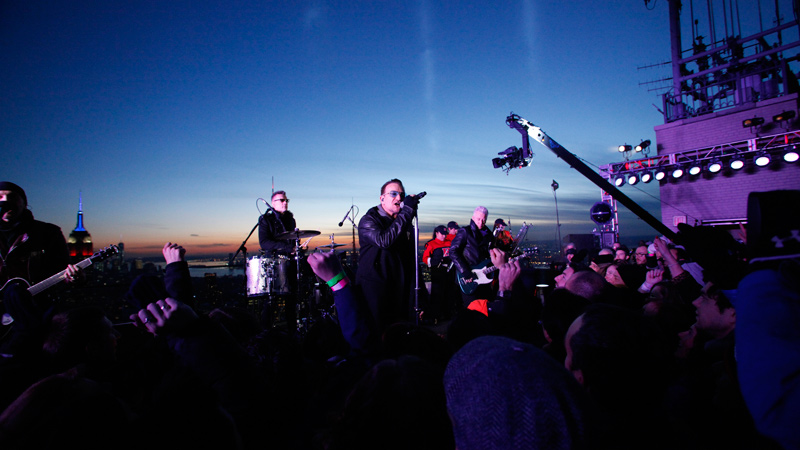 The set was shimmery and ornate.

The Roots — joined by two new members to make it a hefty 10-piece — are on a stage worthy of an orchestra. (Do they get to play the Top of the Rock sometime, too, though?) 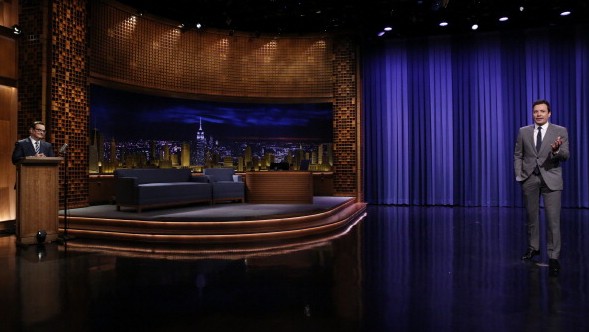 Meaning humble, goofy, 39 years old, feelings-y, and welcoming. He opened things up by explaining the concept of The Tonight Show as a whole, made the obligatory nods to the property’s rocky hosting pattern in the past few years, gave a little background about himself, bantered with his parents in the audience, and maybe got a little choked up in the process. Well done.

And Will Smith wore some checkered pants.

He also said, “I was trying to hurry up and get Jada pregnant backstage” and “GET DOWN THAT ICE, YOU ROCK”; one remark came directly after speaking about Fallon’s 6-month-old daughter, and the other was in reference to Olympic curling — mix and match as you see fit. But before that, there was “The Evolution of Hip-Hop Dancing.” (Checkered pants not pictured. Apologies.)

Filed Under: TV, Will Smith, u2, The Roots, Jimmy Fallon, The Tonight Show, the tonight show starring jimmy fallon

Jimmy Fallon's First 'Tonight Show' Is Coming Right Up, and He Might Be a Tiny Bit Nervous