Is There Anything to All These Mad Men Conspiracies? 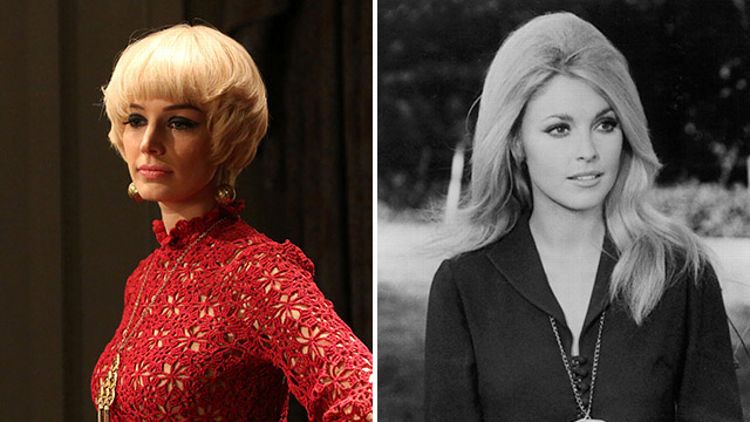 If Don Draper were alive today, he’d be 87 years old. Roger Sterling would be 96. Pete would be 79, Peggy would be 74, Joan would be 82, and Megan would be 73, but the likelihood that all of them would have survived after years in the smoky, boozy pressure cooker of SCDP (and its permutations) is slim. A show with so many characters, spanning such a broad swath of past decades, is bound to incur some casualties. There’s something ominous about Mad Men and its internal clock: Even without the jumping-off point, there’s nothing like children zooming past puberty, peeling mod wallpaper, and fringe characters battling cancer to remind you that we all must die. The question isn’t if, it’s how, and whether or not we’ll be there when it happens. Sneakily secretive Matthew Weiner loves leading us down false paths (remember when we all thought Pete Campbell was a goner in Season 5?), but in this Room 237 world in which we live in, the Internet is now convinced that Megan Draper is Sharon Tate, a fellow actress and wife of a philanderer, and she’s fixin’ to get murdered.

First, some history. Uproxx has been going full Tony Ortega/CoS on Mad Men plot conspiracies for some time now. They hit on some good points regarding the significance of Room 503, but they also pitched a prediction that Pete Campbell would get mauled by a bear. The sources of these psychic vibes are Reddit trawls and recap comments, and when you start digging around on your own time you’ll find an endless supply of theories and close readings of images and symbols. Weiner’s spoilerphobia is an invitation for us to play along at home, becoming amateur cartographers who doodle roads between the cultural events we know are going to occur. When Megan was pictured in the most recent episode styled like Sharon Tate, it was striking even if you didn’t immediately get the reference (or mistook it for Macy’s product placement instead of the Vietnam star), especially considering the violence (stabbings, spearings) and omnipresent, voice-drowning sirens that made you want to adjust your audio settings. Reddit, the Nancy Drew of the net, jumped on this image like it was a wild palomino, lassoing a tweet from Mad Men designer Janie Bryant confirming that Megan’s balcony jammies were indeed based on Tate’s 1967 Esquire shoot. The star decal also mirrored Abe’s stab wound. Tate was pregnant when she was murdered by the Manson family and Megan has had a miscarriage this season and seems to be considering getting pregnant again; Sally Draper was pictured reading Rosemary’s Baby, the movie of which would be directed by Tate’s husband, Roman Polanski. The Season 6 poster referenced a crime scene, with Don Draper and his double walking both toward and away from it, plus there was that whole thing with Megan’s soapy costar Arlene hoofing it through the dangerous park at night. Though the general consensus seems to be that Megan isn’t supposed to be a literal stand-in for Tate, there was enough evidence to get everyone’s gears turning as to who might Zou Bisou Bis-off Mrs. Draper: Could Bob Benson be a psychopath behind that eager vanillaness? Or maybe loopy Arlene is a cult member? Is Don going to snap? (HE LIKES THE BEATLES!) Is Grandma Ida, the scary-but-charming home invader, a reference to Manson’s racial paranoia?

Once your brain starts looping around this airport, you notice strange terminals everywhere. For instance, you could look up the 1994 soap opera based on Valley of the Dolls, just because Tate starred in the 1967 film and Megan is on a soap opera. You might notice a faint resemblance between Dolls’s Neely/Helen relationship (to be fair, Tate played neither of these characters — she played the one who overdoses) and Megan’s friendship with Arlene, and wonder if Arlene plans to introduce Megan to amphetamines and Seconal, which would of course result — spoiler alert! Go watch Valley of the Dolls right now if you haven’t already and don’t accuse me of not warning you — in her cheating on Don, becoming a drugged-out dingbat on set and finally being committed to a mental institution. You may note that Megan plays twins on her soap, and that Tate’s house also had a “twin.” Mad Men likes to use doubles (Don and Dick, the mirroring archetypes in the pre-merge firms), and this past episode’s title (“The Better Half”) just might — if you’re already set in this direction, that is — be a reference to a quotation attributed to Tate, in which she called Polanski her “better half.”

These signposts could also be of metaphorical significance, the “death of the hippie movement” that the Manson murders precipitated and New York’s crime uptick that began in the ’60s and worsened through the ’70s (and then came the crack epidemic). Los Angeles’s historic canyon murders have a certain brain-stoking appeal. (Boogie Nights references the Wonderland murders, and even Behind the Candelabra touches on it tangentially by including an Eddie Nash character named Mr. Y.) Laurel and Benedict canyons have a history of housing wealthy artists, and any violence that mucks with their casual affluence and citrus groves creates an intriguing imaginary playground. Maybe what Weiner is getting at is the loss of innocence and security, the death of idealism, and the sanctity of the posh apartment home. As Peggy slides into protective NIMBYism and stabs anti-establishment Abe, maybe she’s killing off her cultural better half out of the same fear that drove Manson to orchestrate his murders (minus the insanity, of course).

In an interview with The Daily Beast, Bryant said that Megan’s shirt was meant to be a political allusion to the Vietnam War and a nod to the city’s decay and general state of “turmoil.” The Vietnam soldier’s lighter that affixed itself to Don at the start of this season was inscribed with “In life we often have to do things that just are not our bag,” and 1968 was not anybody’s bag as far as the war was concerned: It was both the deadliest and the most expensive year, not to mention a pretty fraught period for media, as the conflict proved to be inescapable for advertisers. Manson once wrote that his “eyes are cameras” and that his “mind is tuned to more television channels than exist in your world,” attributes that would have made him a formidable rival of Draper’s had he abandoned his evil plans and ventured into advertising instead. In his pitch for Kodak, Draper cites the Greek translation of nostalgia as “the pain from an old wound,” a “time machine that takes us to a place we ache to go again.” Deconstructing Mad Men is like being in a crowd, snapping pictures of familiar ghosts in the dark and shouting, “Did you see that?” at each other, desperately straining for more articulation on those blurry, gauzy silhouettes.