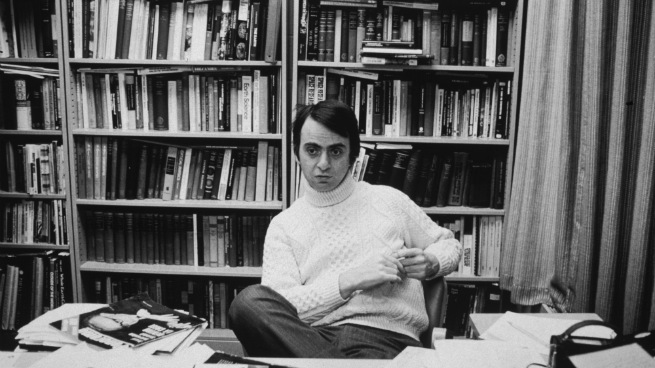 Considering last Sunday’s television schedule, you may not have been one of the 8.5 million viewers who tuned in to Fox’s Cosmos: A Spacetime Odyssey, but I’m guessing many of us have found the time to catch up by now (Fox has projected a global viewership of more than 40 million pairs of eyes within the week). You may also have reservations about the reboot of Carl Sagan’s groundbreaking 1980 PBS series Cosmos: A Personal Voyage — our own Claire Evans had to watch it a couple of times to accept A Spacetime Odyssey on its own terms (Sagan-less, produced by Seth MacFarlane): “Maybe we should think of Cosmos not as a TV show, but as a version of that process, one that each generation gets a pass at.” Sagan’s series is, in many ways, untouchable — but there are new theories and exoplanets that deserve our attention, and though, as Evans points out, Neil deGrasse Tyson wears a green-screen halo, he’s an excellent choice to fill Sagan’s giant moon boots, empty since 1996.

Cosmos isn’t the only emblem of our reinvigorated fascination with the farthest reaches of the universe and the secrets of the natural world; this Friday, the special Live From Space will air on National Geographic, and Craig Ferguson recently told the SXSW audience that he would be producing and hosting a Science Channel series based on the I Fucking Love Science page on Facebook. He likened science to the Internet, where “all things are connected […] Think of it as a late night Google search that goes a hundred pages deep until things get weird — and then you just keep going.” The comparison is apt in a few ways: One of the frustrating aspects of considering space, matter, and our connection to any or all of it is that the answer to one question just leads to another complex riddle, ad infinitum. It’s easy to be dwarfed by your own ambitious curiosity, to have your sense of wonder overcome by the limitations of your brain’s math and physics deficits.

The Internet is utilitarian when you’re searching for a single answer, but you unlock its most powerful pleasure-stoking capabilities when you embark on a personal voyage all your own, letting it guide you to pages you weren’t looking for in the first place and answering questions you didn’t realize you were asking. It’s a wormhole: Your preferences and link-curiosity determine how you get from Point A to Point Z, usually many hours after you’ve begun. The passage of time becomes imperceptible, you forget your body in the chair. The Internet is its own cosmos, one that Sagan was never afforded the ability to plumb in its current state.

In honor of Sagan, here’s a little tour of the Internet as it relates to some of the things that inspired him. (You can also watch all 13 episodes of Cosmos: A Personal Voyageon YouTube .)

Sagan was 4 when he attended the New York World’s Fair, the first to examine the “world of tomorrow.” A time capsule was buried (among its contents: a Gillette razor, a pack of Camels, sugar beets and tobacco in glass receptacles); 38 years later, the Voyager probes would act as another record of a particular time and place (Earth), this time “intended for alien eyes” instead of those belonging to future humans.

One of the features of the fair was the Middleton family, a fictional group of souls who were assembled into a nuclear unit by the Westinghouse corporation to illustrate and advertise “electricity’s greatest marvels” (and warn against anti-capitalists, like poor Babs’s boyfriend, who would be happy to “eat sawdust” because he’s an idealist and his hunger pangs are warded off by thinking hard about Aristotle).

From here, it’s logical to dive deep into the cerulean suburban pool of vintage educational videos. The Tomorrow Always Comes channel offers quite a selection, including this one, which teaches you how to date circa 1960:

The most popular attraction at the fair was a ride called The Futurama (referenced, of course, in the pilot episode of Futurama), which presented what amounted to a pretty accurate vision of what was then the future (1960), and our transportation infrastructure today. Visitors could take in miniaturized landscapes, imagine living in a world where everyone owned a car, and see an early draft of the freeways linking futuristic urban hubs. The Futurama was revived for the 1964-65 New York World’s Fair, which you can ride right here:

Sagan became a fan of Burroughs’s Barsoom series as a child, and rumor has it that he hung a map of Barsoom (a.k.a. Mars) based on Burroughs’s writings outside his Cornell office as an adult (John Carter and his adventures also inspired Ray Bradbury’s Martian Chronicles, and 2012’s John Carter was released a hundred years after Carter’s debut). Here’s the bootleggy full text of 1928’s The Master Mind of Mars, if you’re too broke or lazy to wait for Amazon to serve you.

Burroughs was also the creator of Tarzan, which was either named after the San Fernando Valley area Tarzana or the other way around. (It would be a better story if Tarzana had been named after Tarzan, but despite many claims to the contrary, Snopes insists that the place came before the ape-guy in this case). Tarzana is as fond of Burroughs as he was of it, and in 1922 the author published a screed in the Los Angeles Times declaring the ideals of the new community. He was NUTS for Tarzana, this man (and he was also selling 100 of his acres, which he had subdivided into residential lots, so he had a lot at stake):

I want you to come out and study the situation here. TARZANA will be a town where we will each live our own life in our own way — the way we have always WANTED to live it — free from conventionalities and restrictions of cities, yet with all the comforts and luxuries to which we have been accustomed.

Here’s a nice bridge between the Valley and outer space: Twenty miles southwest of Tarzana, in Topanga, there’s a “UFO hotspot” (if you believe people who were taking LSD while staring at the sky), which I’m sure means you can score some sick UFO WI-FI!

Sagan was skeptical about reported UFO visits: All other logical arguments aside, he just didn’t think they’d be very common. In the video above, he suggests that a fascination with stereotypical aliens speaks to a cultural disillusionment about religion — sci-fi-inspired extraterrestrials are a “clever compromise” between faith and science. Despite his reluctance to jump on the abduction-happy spaceship bandwagon, Sagan referred to the UFO believers several times and spoke at the UFO Symposium of 1968 (a transcript is here).

There have been a lot of UFO sightings in Canada lately, attributed (in Sagan-ish fashion) by a “UFOlogy research director” to economic worries, which lead “to an increased desire by some people to look skyward for assistance.”

Honestly, there’s not even enough time in a human life to sift through all the UFO videos out there. If you enter that wormhole, you’ll exit dead.

Ah, proof that it doesn’t always make you dumb. Sagan loved marijuana so much he wrote an essay under the pseudonym “Mr. X” for Marihuana Reconsidered. He empathized with the insane, chatted and laughed with friends, and had some great ideas while under the influence as well: “the devastating insights achieved when high are real insights; the main problem is putting these insights in a form acceptable to the quite different self that we are when we’re down the next day.” Sometimes he wrote his thoughts in soap on the shower wall, and you thought those things were smart, because they were (and you didn’t know that he was high as a kite, graffiti-ing his entire bathroom, probably about to go eat an entire pint of ice cream).

There are many silly paths to take from this origin point. This one. This one. And this one in particular, in which Marihuana Reconsidered’s coauthor Dr. Lester Grinspoon (who also revealed Sagan’s identity as Mr. X) gives an interview to Vice’s Motherboard about getting high with Sagan. What I really wish I could have asked Sagan, though, is why the stoner aesthetic sucks so hard. Ninety percent of the visuals that turn up on a rudimentary web search for stoner art look like a big platter of barf with eyes.

What we do with our world, right now, will propagate down through the centuries and powerfully affect the destiny of our descendants. It is well within our power to destroy our civilization, and perhaps our species as well. If we capitulate to superstition, or greed, or stupidity we can plunge our world into a darkness deeper than the time between the collapse of classical civilization and the Italian Renaissance. But, we are also capable of using our compassion and our intelligence, our technology and our wealth, to make an abundant and meaningful life for every inhabitant of this planet.

Google, what’s going to happen to us? 2012’s vision of future robots and mind-control headsets? An apocalypse? Will we move to Mars or Gliese 581d — and what would that look like, exactly, and how will we get there?

But the Internet isn’t actually outer space, because finally, exhausted, you hit a dead end — a finite point, a good note on which to end. You have strayed too far from the place you began. Go home, you’re thunk. There will be more questions tomorrow, and another long night ahead of you to wonder about them.

The Andy Greenwald Podcast: Danny Pudi of ‘Community’ and New 30 for 30 Short ‘Untucked’