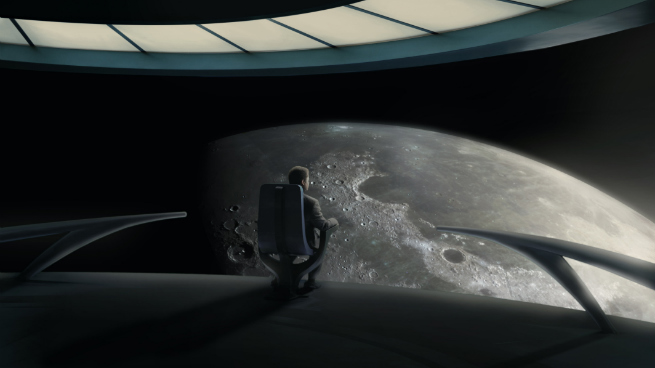 The first episode of Cosmos: A Personal Voyage, the 13-part miniseries that made Carl Sagan a household name in the early 1980s, opens with Sagan standing on the precipice of a seaside cliff. He wears an orange anorak and is dwarfed by the ocean. As the wind whips his bowl cut around the planetary roundness of his forehead, he speaks of grand mysteries, of our little Earth poised somewhere between immensity and eternity. “I believe our future depends powerfully,” he says, tromping across a moor, “on how much we understand this cosmos in which we float like a mote of dust in the morning sky.”

Sagan liked to call the universe “cosmos.” It lent an air of ceremony to the proceedings, an acknowledgement of the subject’s mythological infinitude. Such grandiosity was part of his shtick: He paid deference to high culture at both of its antipodes, with language cribbed from literature and ideas drawn from pure science. It was his way of giving the public some credit. He didn’t believe in dumbing things down, only in zooming things out, so that the big picture could be visible to anyone with a naked eye.

Cosmos was dedicated, Sagan wrote, “to the proposition that the public is far more intelligent than it has generally been given credit for; that the deepest scientific questions about the nature and origin of the world excite the interests and passions of an enormous number of people.” This vote of confidence paid off. In 1980, the year it premiered, Cosmos’s viewership represented about 3 percent of the population of planet Earth; in the intervening years, it’s been seen by some 500 million people. Until it was dethroned by Ken Burns’s The Civil War in 1990, it was the most widely watched series in the history of American public television.

Sagan felt that we are all, in a very real sense, made of star-stuff, that we are “part of the cosmos, born from it, our fate deeply connected with it.” In suit, the only real agenda of the original Cosmos miniseries was secular humanism built to resonate on an emotional level, a worldview in which the search for truth alone — amid the numinous vastness of the universe — might satisfy the stirring of our souls.

Thirty-four years later, that same seaside cliff opens Fox’s remake of the series, Cosmos: A Spacetime Odyssey, hosted by Neil deGrasse Tyson. It takes a special kind of hubris to fill Sagan’s shoes, especially while standing on a precipice, but Tyson digs his heels in. He dispatches with the nostalgia quickly: “A generation ago, Carl Sagan stood here and launched hundreds of millions of us on a great adventure,” he says, adding gravely, “it’s time to get going again.”

In many ways, Cosmos was ripe for a remake. As Tyson notes, a generation has passed, and Cosmos’s cultural capital has earned interest in the transition into the new millennium; the popular YouTube series “Symphony of Science” Auto-Tuned Sagan’s greatest Cosmos moments to the delight of nearly nine million viewers, and Tumblr — that great indicator of zeitgeist — abounds with GIFs of Sagan traveling the universe in his dun-colored corduroy suit.

Some of this is due, presumably, to a remastered version of Cosmos that aired on the Science Channel in 2005. It struck a nerve with a new generation of viewers, myself included; its trippy soft-focus effect sequences felt both nostalgic and somehow very current. The first episode came prefaced with an appearance by Sagan’s widow, Ann Druyan, who noted that even after 20 of the most tumultuous years in the history of science, “Cosmos requires few revisions and indeed is rich in prophecy.”

This may have been true in 2005, but the Tyson-fronted reboot comes in the midst of a revolution in planetary science. Just last month, astronomers announced a bonanza of some 715 new exoplanets — planets outside our solar system — nearly quadrupling the tally of alien worlds discovered by NASA’s Kepler space telescope. Sagan, whose own scientific research focused on precisely this kind of thing, would have been delighted; A Spacetime Odyssey, if it wants to stay current in such an active period of discovery, has its work cut out for it.

Cosmos: A Personal Voyage was a labor of love. Like the remake, it was co-written by Druyan, Sagan’s third wife, whom he met while working on the Voyager Golden Record project at NASA. The Golden Record, if you’re not familiar, is a gold-plated LP affixed to the sides of the Voyager 1 and Voyager 2 probes, a cosmic mixtape of greetings from Earth, music, animal sounds, and — significantly — a recording of Druyan’s heartbeat. Of course, it’s likely aliens would take the Voyager Golden Record for a piece of space garbage; Sagan himself called it a “symbolic statement rather than a serious attempt to communicate with extraterrestrial life.”

The Voyager probes are now the farthest man-made objects from Earth, 19,024,807,778 kilometers away as of this writing. Sagan died in 1996; the Golden Record is his eternal flame. It makes a cameo in Cosmos: A Spacetime Odyssey, scooting past the porthole of Tyson’s updated “Ship of the Imagination” in its journey from Earth to the edge of the observable universe, across a smorgasbord of whirling dust clouds and iridescent comets.

Cosmos: A Personal Voyage was modeled on — and produced by the same team as — The Ascent of Man, a 1973 BBC series tracing human history through science, whose presenter (Jacob Bronowski), like Sagan, made eloquent unscripted monologues against visually arresting natural backdrops. Both are 13-part series with a keen, almost romantic sense of the natural sublime. What they lacked in special effects, they made up with grandiose plays of scale on our own planet: Bronowski expounding on the chemical elements from within an enormous medieval salt mine; Sagan with his cliffs and moors.

Much of the premiere episode of Fox’s Cosmos, however, is so mightily and spectacularly computer-generated that it lends the entire scientific enterprise a fictional air. The change in subtitle — from a “personal voyage” to the rather more ambitious “space-time odyssey” — seems about commensurate with the upgrade in production values. Tyson witnesses the Big Bang, glides across a cosmic calendar, and swoops over roiling interplanetary vistas in a sleek glass marble. Shooting this, one imagines, must have required a lot of time indoors; a faint lime halo from the green screen seems to encircle his profile.

Tyson is an accomplished educator and a more than capable television host. He has gravitas and enthusiasm in spades. As the most visible public scientists of their generations, however, he and Sagan have different styles. Tyson made headlines late last year for aggressively debunking, via Twitter, the scientific plot holes in Gravity; Sagan, a concerted pot smoker, would probably have appreciated the film’s attempt to instill an awe of space in a mass audience. Fortunately, with Druyan at the helm as executive producer and writer, some balance is struck between these two sensibilities, products of their respective eras: Cosmos 2.0 retains the original’s literary tone, its emphasis on the scientific project as a grand human undertaking, while letting Tyson be Tyson. There’s even a Pluto joke.

The original Cosmos wasn’t just a television show; it was also a book that topped best-seller lists for more than a year and sold 5 million copies. Just as Arthur C. Clarke and Stanley Kubrick wrote the film and novel versions of 2001: A Space Odyssey simultaneously, the two versions of the originalCosmos are based on each other. “I like to think,” Sagan explained, “that the pleasures of each will be enhanced by reference to the other.” A Spacetime Odyssey doesn’t have a literary counterpart, but that doesn’t mean it’s not intertextual; the pleasures of the new series will doubtless be enhanced by a whole host of additional materials on the web, including Tyson’s own Twitter screeds.

It will also, for some, always exist in relation to its antecedent. It took two passes for me to come to terms with the new Cosmos. But if there’s one thing A Personal Voyage taught viewers, it’s that science is always an unfinished project: a daisy chain of curiosity that spans the ages. Maybe we should think of Cosmos not as a TV show, but as a version of that process, one that each generation gets a pass at. In that case, I think I’m proud of our iteration. It has a foot in the past, but it has the audacity to face forward and jump off the cliff.

Claire L. Evans (@TheUniverse) is the editor-at-large of OMNI Reboot and one-half of the conceptual pop group YACHT.

‘True Detective’ Finale: All We Have to Do Is Let Go

Fox goes on a renewal spree, picking up 'The Following,' 'New Girl,' 'Brooklyn Nine-Nine,' and 'The Mindy Project' for next season.