‘True Detective’ Finale: All We Have to Do Is Let Go 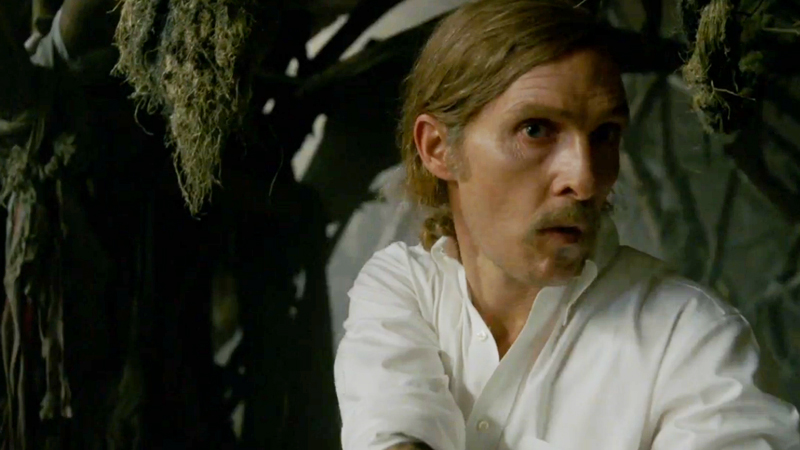 Andy Greenwald: On True Detective there were essentially only two characters, at least only two characters who mattered: Marty Hart and Rust Cohle. (Poor Gilbough couldn’t even get a cup of coffee in the finale!) Over the last eight weeks, it became clear that there were also only two types of viewers of True Detective. I outed myself early as a classic Marty: skeptical of spiritual/psychological babble, increasingly sick of violence, and ready for a drink. A great swath of America, however, went full Rust, chugging down his stone-faced observations about space-time like tallboys of Lone Star, seeing dazzling outtakes from Cosmos where I saw only a drab expanse of sky.

You needed to be a Rust to survive last night’s finale. “Form and Void” felt much more like the latter than the former. It was an endless, shadowy walk through a sylvan ruin, rife with signifiers, while a crazy person shouted nonsense. At the end of the journey was a sharp knife labeled “resolution.” True Detective talked a good game — well, it certainly talked — about the nature of the universe and the systemic rot of evil and horror. But the finale reduced all of those high-minded observations to production design: the artfully scribbled incantations, the haunting sketches of antlers, the broken dolls and accumulated filth that are cinematic shorthand for incest and villainy. In the end, Marty and Rust got their man but what mattered more was that they got each other. Through their reckless, self-harming actions our heroes were able to achieve not justice but closure: Marty reconnected with his family and his mojo, Rust tied off the emotional time-loop on the loss of his daughter. True Detective chose the most ambitious way possible to tell what was, ultimately, an extremely conventional story.

Not that there’s anything necessarily wrong with that. High art has been elevating low pulp for decades. I just think that the ratios were askew. Watching a nation of mini Rusts dreaming up their own conspiracy-laden Carcosas these past few weeks has been electrifying, even though I was only ever a spectator. Part of what makes TV — and particularly weekly TV (Netflix, take note!) — great is the way fan excitement and investment rushes to fill in the spaces between the episodes, the gaps in the logic. When shows are young, we carry them on our shoulders like kids at a parade. When they stumble, we carry them across the finish line like a marathoner with a sprained ankle. I just wonder how many Cthulhu-worshiping obsessives are disappointed this morning now that it’s been revealed that the King in Yellow has no clothes. That True Detective didn’t dream as big as its m-brane theorizing fans is no great sin, nor is it a great surprise. With the outsize amount of attention we give them, hour-long TV shows are becoming increasingly insufficient vessels for our cultural and intellectual hobbyhorses. We need more than flat circles to contain them all.

My own relationship with True Detective moved in reverse. My favorite episode of the series, by far, was the seventh, “After You’ve Gone,” mainly because it kept the mysticism to a minimum. I liked seeing Marty and Rust play supercops all across the bayou. Once it arrived, their final investigation moved at a bracing clip, finally allowing the atmosphere, momentum, and killer performances to smooth out the kinks in a mystery that had swollen to wildly complicated proportions. The episode showed that writer Nic Pizzolatto and director Cary Joji Fukunaga could make something satisfyingly straightforward if they wanted to. They were just far more interested in drawing curlicues outside the lines. So I was disappointed last night when Rust fired up his talk box again (“sentient meat”!) and the procedural parts that I liked best were reduced to a lot of Googling, a fair bit of driving, and a remarkable leap of faith about a fresh coat of paint. But as Pizzolatto has said between bites of branzino in his many, many interviews about True Detective, he’s simply not that interested in solving crimes. Rather, he enjoys poking at the motivations of those who are.

On the face of it, that’s an attitude I can get behind — the best crime fiction is always about the “whos” and “whys,” never the “hows” — and it leaves me optimistic and eager for a second season. I only wish I had found Marty and Rust’s 17-year journey to be as rich as Pizzolatto did. Rather than opening things up, I ultimately found the time-jumping conceit strangely reductive. (You know what else is a flat circle?) How else to explain the way the expansive moral universe suggested by True Detective’s still rather remarkable pilot was reduced to a binary — two points of view to match its two characters? “Light versus dark,” as Rust put it, in his final bromantic smoke with Marty under the wide Louisiana sky. Even as a True Doubter, I was surprised how simple and sober this was, how little room it left for nuance or shades of gray. True Detective feinted toward complexity, it hinted at depth, yet in the end the bad guy was a monster in a haunted house. “It’s just one story,” Rust said before wheeling his way to freedom. “The oldest.” He was right. I’m just not sure that’s a compliment.

“Stay calm, cowboy. That churning hellmouth opening above this dank chamber of despair is not necessarily a bad omen. Might just be some weather. Could blow over.” 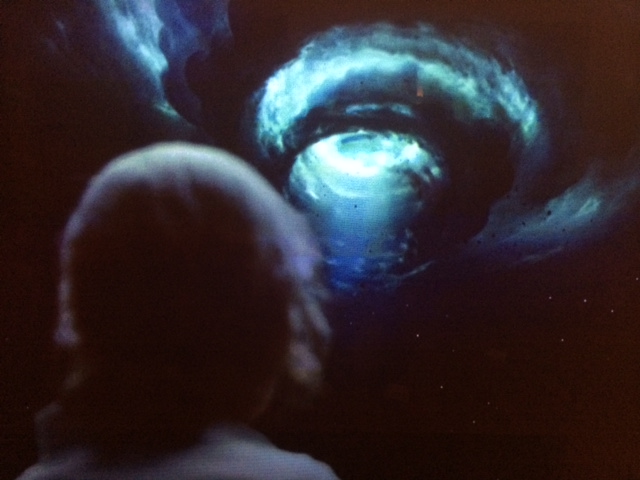 A Pack of Camels and a Happy Ending

Mark Lisanti: What did we want out of this finale? And what did we get?

We wanted our detectives to lay down their lives for the case that had already claimed them, to be finally consumed by the darkness they were chasing, the debt they were trying to repay, the contracts that closed off the possibility of a second season. But we got another crazy redneck with a Hoarders house dispatched by a head shot, and a crime solved, mostly, instead of a Yellow King disappearing into the overgrown labyrinth of Carcosa.

We wanted Gwyneth Paltrow’s head in a box, but we got a pack of Camels.

We got Rust Cohle, the worn-down needle dragged across the spinning surface of time’s flat circle, playing a hopeful song, looking up into the night sky above the hospital to watch as a star-swallowing vortex twisted into a glimmering smile.

We got Marty, fully recovered from an ax to the chest that should have been buried deep in his broken heart, wheeling him off into the night, the entire world a green screen backdropped behind their new conversations.

We got two flawed heroes, triumphant enough in their survival.

We got what will pass for a happy ending.

Due to overwhelmingly popular demand for #TrueDetective, we've been made aware of an issue affecting some users. Please try again soon.

Next Up for Rust and Marty

What should Woody and Matthew do to top this? I think Matthew has proven via Rust’s walrus mustache that he should play David Crosby in a biopic, and that he’s willing to lose or gain weight for a role. Maybe playing one guy across different time periods isn’t enough of a challenge anymore, so I’m thinking he should also play Stephen Stills, Graham Nash, and Neil Young in a movie about the Laurel Canyon scene. Think about it. Four-way harmonies, 100 percent McConaughey. Woody has circled around completely and could now play Rodney Dangerfield’s terrifying, abusive sitcom dad role in a remake of Natural Born Killers, not that anyone should ever attempt that. I wouldn’t mind Harrelson in a sitcom, though.

Emily Yoshida: In these first hours of processing since the credits rolled on “Form and Void,” I’ve read multiple interpretations from people who seem to think Marty got his wife and family “back.” I think that’s a bit of a stretch — that Maggie hand hold was more of a “Hey, we’ve had our differences but I’m glad you’re not dead” moment than a “I’m leaving my husband and my fancy new house, oh and also you were always a wonderful father to our girls, don’t be threatened by all that Reviving Ophelia stuff, that book was huge in ’95.”

No, Marty’s life will probably continue as it had before, with a little less soul-crushing loneliness. But he can definitely cancel his Match.com subscription, because he’s found a partner for life in Rustin Cohle. Aside from all the brain blowing and Carcosian climaxes, last night’s episode was a giant gift/tease to all of us who’ve been (not-so) secretly ’shipping Marstin, right down to the oh-so-tenuous tie on Rust’s hospital gown. (It strikes me as a very McConaughey thing to do to play that final scene commando, for no other reason than to fuck with Woody.) Whether you see it as platonic or not, Marty and Rust found love in a hopeless place. Here are the top five times I yelled “KISS!” at my TV last night, in ascending order of volume: 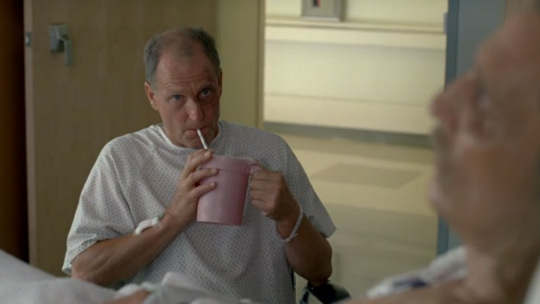 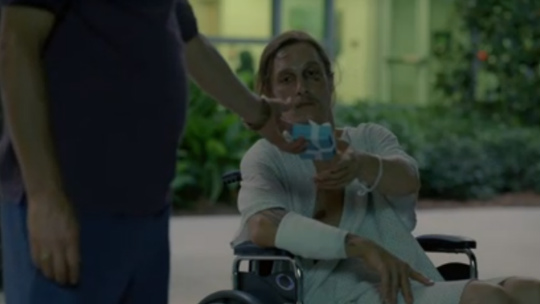 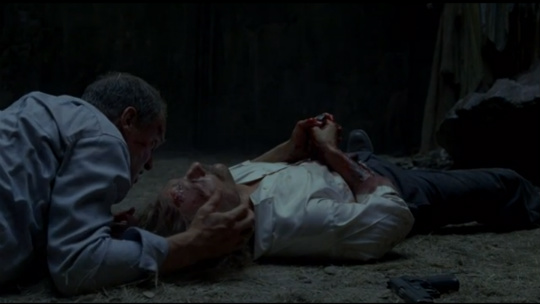 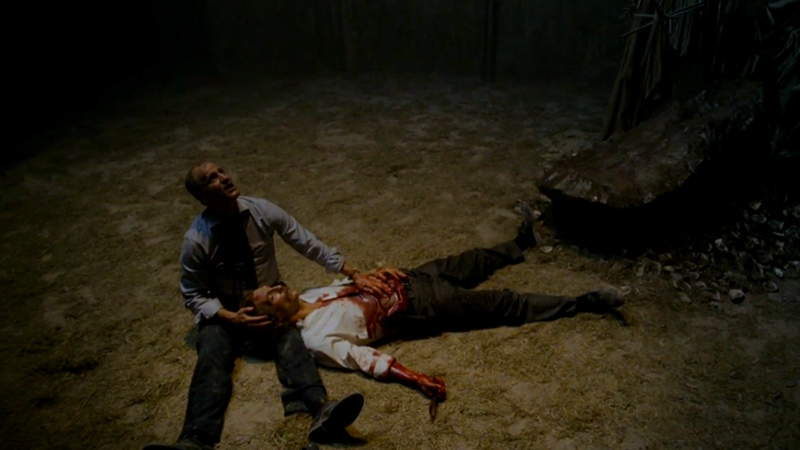 1. “On second thought, you’re right, pretty useless to go back for your clothes at this point.” 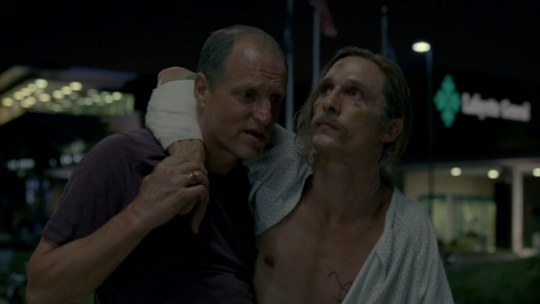 Tess Lynch: Still processing. Spinning Apple rainbow spiral. But what about … and how could they just … and, no, it was great … and wait that’s Ann Dowd? Here, take this True Detective Finale Pinterest:

4. Make your own McConaughey.

8. It’s not just for torture sheds.

9. They cut out the part where all the green-eared spaghetti monsters were called in for a lineup.

“Hey, do I look sort of Jesus-y in my hospital bed’s reflection? Maybe it’s just me, I’m on a lot of pain meds.” 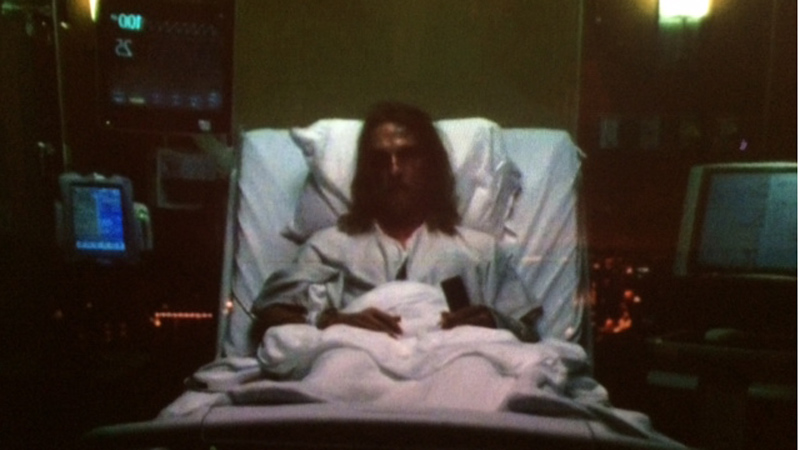 John Lopez: So we come away (not surprisingly) with absolutely no idea who or what the Yellow King was aside from a nifty allusion to obscure 19th-century genre fiction tailor-made for the Internet age. Though I guess Carcosa is just really the world’s biggest/creepiest folk art installation. However, that’s not to say there weren’t some big revelations worth keeping in mind after last night’s finale.

Next Season on True Detective!

“Okay. This is really early, but I’ll tell you (it’s about) hard women, bad men and the secret occult history of the United States transportation system.”

"Brad Pitt smells amazing, like nothing I’ve ever smelled. Eventually we ask what cologne he’s wearing and he tells us, ‘I don’t wear cologne, it’s just my musk I guess."