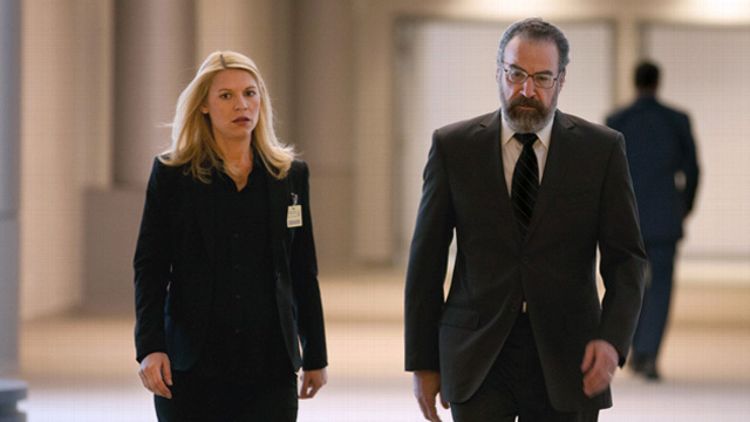 “The agency is a funny place, very insular. It’s like middle-schoolers with clearances.”

“What is all this squishy bullshit?!?”

Other than Storage Wars, no current television program has received as much scrutiny for blurring the lines between reality and fiction as Homeland. In its schizoid second season, the reigning Best Drama Series — according to a plurality of Emmy voters and U.S. presidents, at least — has walked a wobbly tightrope in its attempts to balance plausibility and imagination, head and heart. After a breathless return that saw the show binging on plot like Carrie Mathison left alone with a box of Chardonnay, recent episodes have ranged far from the reservation, alienating wavering viewers with an abundance of action and a sudsy indulgence in doomy romanticism. But “The Choice” — last night’s deeply satisfying, deeply moving season finale — was a reminder that this fundamental imbalance is Homeland’s greatest achievement.

After all, going by the first quote above, the real CIA isn’t nearly the paragon of prudence and professionalism that Homeland‘s armada of accuracy cops believe it to be. (The Post story was about the prickly analyst who inspired Maya, the terrorist-hunting protagonist of Zero Dark Thirty. An undercover woman who maintained her job and got her man in spite of an OCD mania that cost her every friend in the building? Imagine!) The smoldering wreckage of David Petraeus’s career alone is a toasty reminder that reckless, soapy spy games aren’t limited to Hollywood scripts. On screen or off, we all get squishy eventually, no matter how noble our intentions or how heavy the business is at hand. Homeland’s genius is showing us again and again the hard cost of that softness.

Consider: For 23 episodes, David Estes was a villainous lurker on the side of the angels, a realpolitik obstacle to humanist virtues like nuance, forgiveness, and hope. When Carrie went gaga last year, he shut her down. When given the chance (and the drone technology), he dropped bombs abroad to keep them from detonating at home. Last night’s most brutal sucker-punch wasn’t Chris Brody learning the truth about his father from a normal-sized TV, it was the realization that Estes’s grim worldview was right. His assassination order for Congressman Brody was repugnant, but reasonable. If only Quinn — the self-proclaimed “guy who kills bad guys” who hasn’t hurt a fly, let alone a mole — hadn’t found his humanity lurking in the bottom of a can of tuna, if only Saul hadn’t rattled the bars on his cage (or, as Dar Adal sneered at him, been so “sensitive”), Brody would have been dead, but 250 people would have been spared. That’s the sort of moral calculus most Americans would prefer to ignore in order to keep their hands and consciences clean. Yet Estes was wrist deep in blood, and not even that could keep him alive, mainly because Quinn, unlike the CIA’s more modern weapons, couldn’t be controlled by flicking a joystick in Tampa. In other words, when the soldier got squishy, the spy got squished.

And are we, the audience, also complicit in Nazir’s big bang? After all, one of the unavoidable side effects of investing in fiction is wishing for a happy ending; Carrie and Brody’s came with a body count. Which is why the first half of “The Choice” — nimbly written by showrunner Alex Gansa and staff MVP Meredith Stiehm, and gorgeously shot by Michael Cuesta — was all about lulling both characters and viewers into believing otherwise. A very intentional echo of Season 1’s “The Weekend,” it was another romantic idyll in the woods, only with “no secrets now.” After spending the past few weeks railing against the apparent truthiness of this love affair, I found myself warming to it. I still think both Carrie and Brody are hopelessly deluded, but in the lovely autumn light by the lake, their bond suddenly seemed both legitimate and sad. The first time they escaped together, they were high on the illicit thrill of being both undercover and under the covers. This time was no less of a fantasy, but it was at least one they could share: “I really have a second chance. I never thought that was possible,” he says. “I would have a clean slate, too,” she replies. But the heightened Harlequin novel details — the roaring fire, the tender touches, the promise of croissants — ultimately tell us a very different story than the one they were telling themselves.

They were wrong, but I was, too: The way this played out was deeper and more rewarding than any triple-crossing Nussbaum theory. Revealing Brody to be an unambiguously active terrorist would have provided a quick thrill but also severely limited the blowback; Carrie would have been both devastated and catastrophically wrong, rendering only the second half of Saul’s brutal analysis accurate: that she’s “the dumbest person” he’s ever known without also being the smartest. Instead, everyone blew it, and the show’s recent overreliance on implausibility begins to look like a feature, not a bug. Sure, Carrie’s and Brody’s behavior seemed hackneyed and melodramatic these past few episodes, because that’s exactly what it was! As the dysfunctional duo chased and punched, crashed and cowered, fucked and ran, lost in a fever dream of romance and vanity, ego and sex, they never took the time to notice the story they were starring in wasn’t their own. The eye-rolling theatrics that polarized the Internet were utterly self-defeating. This was Nazir’s suicide plot, not an action movie or a rom-com. And only one of the principals stuck to the script.

What most impressed me about the writing last night was the way it rendered Brody’s actual guilt or innocence practically irrelevant. For those still tethered to the Nussbaum tackboard, there was plenty there to keep you in knots: the attention Brody paid to the handgun in the cabin, his panic attack outside of the bar. (Update: the aforementioned scene I described as a “panic attack” outside the bar was cut from the final broadcast version.) But there’s also a reasonable counter for each: By pointing out the pistol, he was disarming it in a public way. And his hyperventilating struck me as perfectly natural for a man saying good-bye to his family, not necessarily his whole life. No matter who put the explosives in Brody’s SUV, what’s significant is that the bomb was rigged to blow during the twin funerals for Homeland’s undisputed chessmasters. Walden and Nazir were two men as unafraid of civilian casualties as they were of calling Brody by his first name. Their dirty war, raging even beyond the grave, was a brutal reminder that regardless of whether he’s a terrorist or a patsy, Brody is a pawn above all. He’s a drained vessel who, despite his best efforts, can’t get clean because of the grubby pawprints two recently deceased mass-murderers left all over him.

And when Carrie chose to believe his innocence — thus continuing their misguided play-acting all the way to the Canadian border — it was in many ways the first pure thing she’s done all season. Dulled by sentimentality and an excess of lithium, her celebrated analytical mind had long ago been rendered useless. (The fact that she went from throwing a bag over Brody’s head to banging him in about a week’s time suggests her anger was always about what he did to her, not what he almost did to his country.) Instead, in a difficult moment played exceptionally well by a pistol-packing Claire Danes, she “gave it up” — Brody’s term, but an apt one. It suggests surrender and devotion, the sort of sacrifice that’s expected from a lover but forbidden for a spy. “I can’t see into your fucking soul, Brody,” she said — that’s something not even Virgil’s best camera was ever able to glimpse. Regardless, she made the titular choice right then and there, with the smoke still rising from the crater where HQ used to be. And she chose to believe him. (So did Dana, the only other person who ever managed to figure Brody out.) Like Homeland’s producers for much of the season, she went with her heart over her head, consequences be damned. It’s something Estes would never do, just as Saul’s solemn prayers differentiate him from Dar Adal’s black ops. Homeland presents us with lead characters who are good people and then is brave enough to ask if that decency also makes them terrible at their jobs. It’s the gray area that separates this show from its brash, macho ancestor, 24. Call it the doctrine of Radical Squishiness.

(A round of kvells and kaddishes for Mandy Patinkin, by the way — and maybe another box of milk and some crunchy peanut butter. His performance in this episode was a thing of beauty, from the soulful quake in his voice when speaking with his wife to the dazzling grin that greeted Carrie’s return and lit up the triage tent like a klieg light. This was a grim season bookended by glorious smiles.)

So does one explosive finale make up for a few episodes of disappointing ticking? I’d say yes. It was a breathless season marred by a few egregious flights of fancy — the pacemaker, the magic BlackBerry, the Wizards beating the Heat (maybe scratch that last one). But from this vantage point, many of the more manic episodes now seem to me to have been intentionally outrageous, a comment on the silly myopia of Carrie’s hero act. (Despite myriad bruises, scrapes, and jazz-interrupting car crashes, she remained a step slow, always trying to catch up to someone else’s beat instead of setting the tone.) Gansa and Gordon’s audacious approach to storytelling has us conditioned to expect a bombshell, literal or otherwise, in every hour, yet they remain pragmatists above all else. For the second straight year, they’ve engineered a way to have their Emmy-winning cake and keep him alive, too, swapping a surprise death for all the twisty drama Brody’s continued presence will provide in seasons to come, whether he remains in the regular cast or not. (In my exclusive interview with Alex Gansa, he said such decisions haven’t yet been made. But, come on: There’s no way Damian Lewis’s tiny mouth is speaking anyone else’s lines next year.)

No matter what you thought of the treacherous helicopter ride we’ve been on these past 12 weeks, the deck has well and truly been cleared in all of the important ways for Year 3. Saul and Carrie have each other but also an enormous amount to answer for, with Quinn and Adal lurking in the shadows. The Brody family is shattered yet marginalized, giving the producers the freedom to circle back to them only as needed, either for context or key karate updates. With Abu Nazir, like Osama bin Laden before him, practicing his Luca Brasi act at the bottom of the sea, the third season is free to focus on a deep, conflicted reckoning with what went wrong. Which, if you think about it, is exactly how the real, non-televised United States got lured into a never-ending war on terror in the first place.

As for Carrie, she must move on knowing that her desperate plea, the one repeated weekly in the opening credits (“I missed something once before. I won’t — I can’t let it happen again”), has indeed come back to haunt her. And that the one time she chose her own happiness over her job, it blew up in her face. “However it hurts the least,” is how Brody asked to say good-bye, but the implication, as it always is on Homeland, is that some pain is inevitable; that no matter how hard this country attempts to take the fight to the enemy, be it a rogue jihadist or an impossible lover, violence and sadness have a way of finding their way back home.