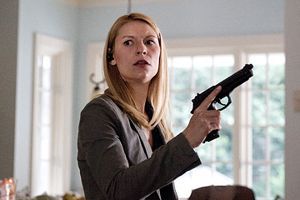 After skipping a week, Andy and I are back with Lou Reed anecdotes, Homeland slander, and Eastbound & Down worship. We kicked things off with a brief discussion of the new French film Blue Is the Warmest Color. After winning the Palme d’Or at the Cannes Film Festival, this epic love story has taken some heat in the lead-up to its release (namely from New York Times critic Manohla Dargis and the film’s own stars, Léa Seydoux and Adèle Exarchopoulos). We discussed the praise, the backlash, and what it was like for me to watch the movie’s extended sex scenes while an old man slept next to me. Mon dieu!

We moved on to more domestic affairs with a chat about the disaster that is Homeland. It remains to be seen whether it’s time to stick a fork into this show, but we sure took a few stabs at it. Don’t worry, if praise is what you’re looking for, we heaped it on this brilliant season of Eastbound & Down.

We wrapped things up with a remembrance of Lou Reed, who died this weekend. We lost a great musician and a great New Yorker, and we recalled him as both. Come on, guys. Take a walk on the wild side.