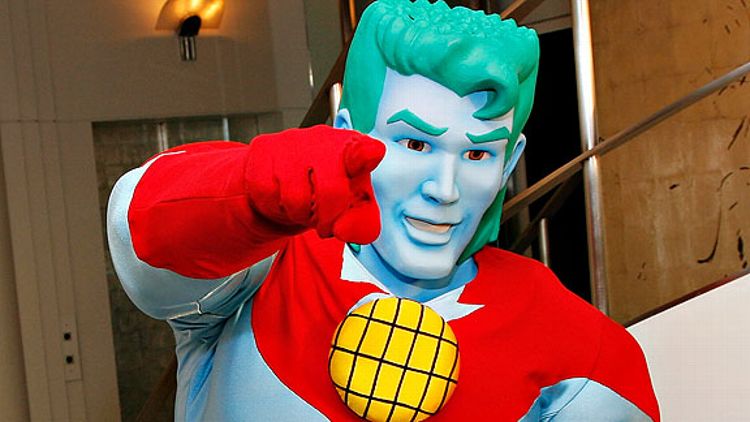 Some may have thought it happened in 2007 with the release of the live-action Underdog movie (starring Jim Belushi, Peter Dinklage and Mayor Roger Sterling!). Others contend it occurred last year, with the green-lighting of an Ant-Man film. But we at Grantland are prepared to call it: Tuesday, July 19, 2011. The day Hollywood officially ran out of superheroes.

Yes, it’s true. Wear your capes at half-mast and fire a 21 (non-organic!) web-shooter salute. Because today our spandex-saturated entertainment industry finally hit rock bottom with the announcement of a live-action film based on Captain Planet and the Planeteers. You read that right: Captain Planet, a blue environmental ideologue loved by exactly no one, a character that will go down in history as Ted Turner’s second-worst idea (just ahead of attempting to popularize bison meat and way behind the Tomahawk Chop), will be resurrected for the big screen. And all we can say is: Why?

Captain Planet sprung from a momentary burst of cultural optimism tied to the 20th Anniversary of Earth Day in 1990, a moment marked by Greenpeace booths springing up at concerts not headlined by the Indigo Girls and the groundbreaking invention of the yellow recycling bin (which, by the way, would also make a great movie). The character was a mulleted, square-jawed zero who attempted to save the globe with his powers of climate manipulation (nobody tell Al Gore!). He hung out with a rainbow coalition of five teenagers with diverse backgrounds (one is from Africa!) called the Planeteers and faced off against evil, polluting villains with names like Hoggish Greedly, Looten Plunder, Verminous Skumm, and Tony Hayward. He was an uninteresting figurehead for a movement that, while worthy, bores everyone in the world not named Greenzo. By far the most memorable aspect of Captain Planet is the rogue’s gallery of Hollywood do-gooders recruited by Turner — no doubt while on a spirited bison hunt — to voice the cartoon’s villains, a bizarrely classy list including James Coburn, Meg Ryan, Jeff Goldblum, Ed Asner, Dean Stockwell, Martin Sheen, and Sting. (All of them bailed on the project after the first season. All except Asner — a pro’s pro!) Unless the non-dead members of that group are still taking Turner’s calls, there truly is nothing here to suggest a live-action film that would be of interest to anyone outside of the world’s most pedantic Sierra Club chapter.

Even worse? There’s no need to signal the end of such a lucrative film genre by (eco-friendly!) dumpster diving like this! There are still long boxes worth of far more far-fetched forgotten superheroes ready for their close-up. Like, say, Arm Fall Off Boy, whose powers are both CGI-friendly, instantly relatable, and right there in the title. (And to the sound engineer entrusted with creating Arm Fall Off Boy’s trademark arm falling off SFX — “plorp!” — make sure there’s some space on your mantle reserved for an OSCAR.) Enough blather — the CO2 emissions might attract Captain Planet.