Hasseling the Hoff: The Rock Is Making the ‘Baywatch’ Movie 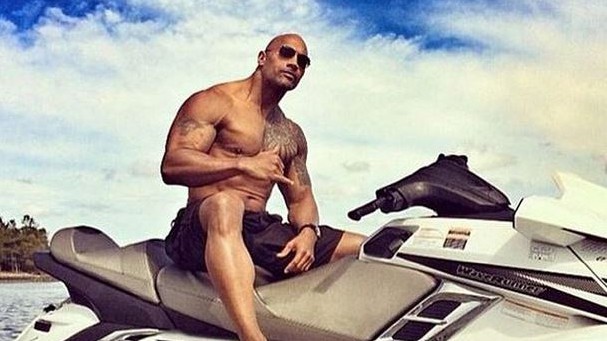 Those were the opening credits for Baywatch, a syndicated TV show that ran from 1989 to 2001. If you didn’t find that introduction sufficiently informative — maybe you were temporarily mesmerized by the hypnotic twirling of that rescue buoy —  Baywatch was about a group of heroes in red bathing suits who saved people in other bathing suits from certain death on the perilous beaches of Santa Monica. It starred Knight Rider’s David Hasselhoff, well-compensated nudity’s Pamela Anderson, and a host of unfortunate, lower-billed actors who were eaten by sharks during filming and immediately replaced by extras willing to risk a brutish and short career as call-sheet chum just to bask, however momentarily, in Hasselhoff’s bronze shadow. There would later be a spinoff where these lifeguards were transformed into detectives by the power of the moon, but that’s not our concern right now. They were better at fishing tourists out of the surf than figuring out how they were later murdered at the nightclub while attempting to buy the designer drug “white sand.”

We bring all of this up because it’s just been announced that Baywatch, the TV show, will soon become Baywatch, the movie. And it will, of course, star the golden god whose irreplaceable charisma carried the series those 11 seasons.

Oh. OK. Well, that’s certainly a different way to go with the project, if you want to trade authenticity and loyalty for the ostensible “bankability” of an A-list franchise-jacker. And the Rock does, inarguably, look at home straddling that WaveRunner, bragging about how “edgy” and “raunchy” his take on the Baywatch mythology will be, exhorting his fans to press their mouths against his while simultaneously admiring the poor fit of his “red shorts.” This will not be your father’s Baywatch, that much is clear. The original Mitch Buchannon would never ask someone to ogle his Speedo-swaddled goodies as compensation for his world-class resuscitation services. He was a gentleman. It was all about the work with him. Romance was always the icing, not the cake.

But these are different times, and they demand a different Baywatch. Hopefully Hasselhoff himself recognizes that, before we’re all subjected to an endless, Shatnerian barrage of cameo requests until somebody offers him Drowning Vagrant no. 1. The Hoff seems either to not be aware of the announcement or too busy living his incredible, globe-trotting life to care:

In fact, Hasselhoff will see your “edgy” and “raunchy” and raise you a “punk-ass motherfucker,” “stopping a watch with his mind,” and a “totally accurate assessment of his television legacy that ends in an awful and disturbing place”:

So is this going to work out for everybody involved, old and new, originals and rebooters? We think it will. When things get dark for the Rock halfway through the shoot, when he’s not sure if this whole project will ever come together as he once dreamed, he may cry out to the heavens to lament how two sets of footprints in the sand have become one in the most trying of times. But then he’ll feel a tap on his shoulder, hear the Hoff’s familiar whisper in his ear: “Don’t sweat it, bro. I was carrying you.”

If U Seek Amy: The Grim Grossness of David Fincher’s ‘Gone Girl’