Grantland Reality TV Fantasy League: Chris Kaman vs. Eyeballs, the Giudices vs. Andy Cohen, and John Rocker vs. the World 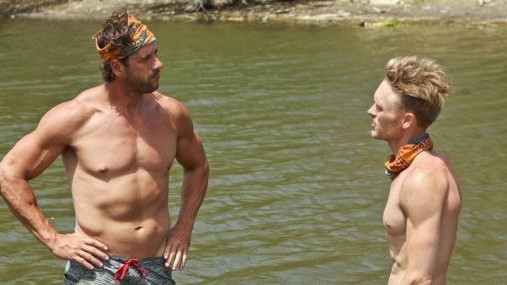 Watching reality TV is like watching baseball. You sit through hours of monotonous, repetitive routine because you know that at any second, one swing — one single moment of brilliance — can change the game and reward your commitment. In this week’s column, I am once again going to distill a dozen or so hours of reality TV down to those singular moments of “Holy shit, did that really just happen?” and serve them up to you so you don’t have to sit through them yourself. This week’s menu features a toast from Below Deck that even Johnny Bananas would be proud to give, John Rocker off his rocker on Survivor, and Teresa Guidice being criminal and insane but not quite criminally insane. But before we get to all of that, we need to check in on Chris Kaman’s offseason. Yes, you read that right.

It is not rare that a professional athlete films a reality show on spec, cuts a pitch reel, and then tries to sell it as a show. Chris Kaman is the latest to throw his hat in the reality ring with his offering, Exploring Kaman. There is little more to this pitch than “you watch Chris and his buddies shoot guns and go fishing.” However, remember how I was talking about those moments of brilliance? This is exactly what I was talking about:

Is eating fish eyeballs a thing? I have only fished one time in my life. Is this some sort of tradition I don’t know about? I always thought I would dig fishing as a sport because it involved so much sitting down and drinking beer. If eyeball eating is involved, I’m out.

Survivor Gave Me the Feels

The reason the people behind Survivor are running back the whole Blood vs. Water gimmick is because having pairs of true loved ones simultaneously participating ups the emotional stakes. Remember last season when Ciera voted out her mom? That was good TV. This season they’re making an effort to pair up loved ones in challenges and have them go head to head. This week, Louisiana firefighter Keith and his son Wes went up against each other in the reward challenge. After Wes came out victorious, the clearly callous Keith started to tear up a little. Jeff Probst, seeing this crack in the emotional armor, went in for the kill:

Keith, Holding Back Tears: “Yeah, well, you see him coming along, he’s a young man … shoot.”

Jeffy P, Needling for Man Tears: “You’re proud of him?”

Then, Jeffy P got what he was looking for:

Wes, Crying: “No. Not at all, I don’t see him this emotional … I mean I have only seen him like that … when my great-grandpa, his grandfather, died.”

Then, the tension from the emotional repression of this father-son duo became too much and crescendoed into this marvelous moment of man-love:

It was perfect. As if the handshake into bro-hug transition didn’t scream “I don’t know how to show my son I love him” enough, he added the verbal confirmation “We’re good,” doubled down on it, and then finished with a strong, quintuple back pat. Naturally, everyone on the show started crying:

And it even got a little misty around the GRTFL headquarters.

Seriously, What Is Most Important?

Below Deck is at its best when the crew hates the charter guests. The crew of the Ohana prefers those they serve to be wealthy, elegant, pleasant, mannered, and sophisticated. When they have a charter like that, it justifies their role as stewards, chefs, and deckhands because they are serving people who they feel are truly in another class. When they have guests who only check the “wealthy” box on that list, the contempt they build is surprising. It’s like the crew feels that the guests are not worthy of their service.

This leads to a palpable “upstairs/downstairs” tension that leads to sneaky-bitchy comments being fired back and forth through polite smiles, which leads to captivating television. Mind you, the crew has no right to feel this way. The guests on this charter may not dress how the crew likes, appreciate the foods they’re served, and scoop too much caviar on their toast … but they have every right to do as they please as paying customers. This tension led to a good episode, but the first meal on the boat led to one of the greatest sentences ever spoken.

The guests’ first meal on the boat was cause for celebration. With them around the table and glasses raised in the air, one of the guests declared:

“To thug life, drug life, and family, which is most important.”

What is so brilliant about this toast, beyond the obvious, is that it is like that drawing that is both an old woman and a young woman at the same time. Is the toast:

“To thug life, drug life, and family, which is most important.”

Or is the toast …

“To thug life, drug life, and family, which is most important?”

THE QUESTION MARK CHANGES EVERYTHING! Is a family man first, drug-and-thug-man second, or is he asking his peers which life is the most important, that of thug, drug, or family? I will never know the answer to this question, and I’m not sure I even want to know. I do know this, though: I will never simply raise my glass and say “cheers” again. “Cheers” is dead. Long live the multifaceted riddle that is “To thug life, drug life, and family, which is most important?”

As if that toast weren’t enough, you know, LIFE for one hour of TV, Captain Lee then Mariano’d the episode with a lesson for the crew about books, covers, values, money, priorities, and, of course, Julia Roberts:

Teresa and Joe Got Weird on Watch What Happens Live

Teresa and Joe Giudice were sentenced this week for multiple charges of fraud, tax evasion, and other funny-money tricks that fueled their lavish lifestyle. The day after the sentencing, they did an interview with Andy Cohen that Bravo reportedly paid them a bagillion dollars for. If Bravo did in fact pay that much (unlikely), it did not get its money’s worth. I haven’t seen the second half yet, but what I saw was a flurry of confusing nonanswers to very direct questions. The most confusing was this exchange:

Cohen: “Why did you accept a plea agreement that would send you to prison for 27 months?”

Cohen: “Did your lawyer not tell you what that meant?”

Teresa: “I didn’t fully understand it.”

Cohen: “What did you think would happen after you accepted that plea deal?”

Teresa: [Pause.] “I don’t know. I just thought — I thought my lawyer was going to fight for me. That is what lawyers do. I don’t know, that is why you hire an attorney, you put it in their hands. Whatever they wanted from me, believe me, I’ve always followed their direction. Whatever they wanted, I gave them. I am not trying to hide anything.”

It’s unclear if Teresa is playing dumb to maintain her innocence, is actually dumb, or is just trying to do whatever she can to get through the interview and cash her check.

This whole thing bums me out, so can we get back to the fun stuff? I don’t know, something like this:

John Rocker Didn’t Try to Fight Someone on Survivor, HE TRIED TO FIGHT EVERYONE ON SURVIVOR

John Rocker, a former Atlanta Braves pitcher and current dickhead, didn’t like that a young lady on the other tribe was suggesting that his tribe members vote him off at the next tribal council. So he responded to her suggestion with the tact and grace you would expect from, you know, John Rocker:

“If you were a man, I would knock your teeth out. You look like a man.”

Check back next week for the best of the worst in reality TV, more eyeball eating, and dated jokes. Until then, listen to the Right Reasons and enjoy the weekend.

Mistrial and Error: RDJ’s Messy ‘The Judge’ and the Highs and Lows of What’s New This Week