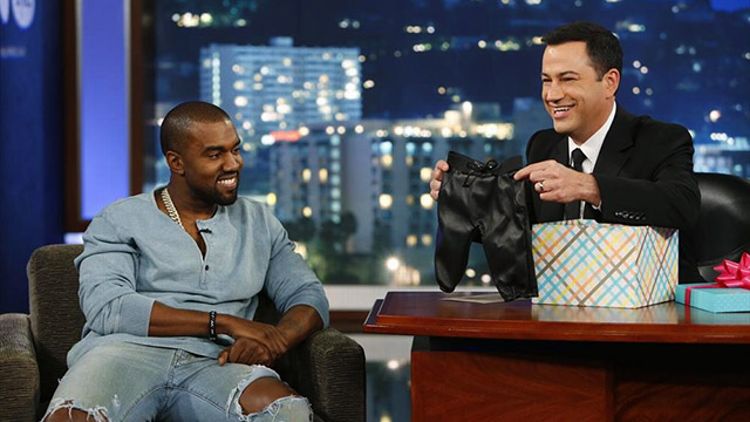 Last night Kanye West sat down with Jimmy Kimmel for a fence-mending interview, although “interview” is probably the wrong word. In an interview it’s customary for both parties to talk, whereas Wednesday’s show quickly became a Kan-o-logue; Kanye wore fringed moccasins, but figuratively speaking he had his black Timbs all on Kimmel’s couch from the beginning. I’m pretty sure the only words Kimmel uttered during the second Kanye segment were “And we’re back.”

West and Kimmel were ostensibly resolving a disagreement that started back in September, when Kimmel aired a video in which a petulant, milkshake-sipping child reenacts some of the more quotable moments of a lengthy, impassioned talk West had with the BBC’s Zane Lowe. After the sketch aired, Kanye took to Twitter, accusing Kimmel of (a) trivializing “THE FIRST PIECE OF HONEST MEDIA IN YEARS,” and (b) looking like beloved children’s entertainer SpongeBob SquarePants.

Generally speaking, when one celebrity is apparently using Meme Generator to insult another celebrity, that’s a clue you’re not witnessing cultural discourse at its most high-flown level. But the Kanye-Kimmel beef was about something real. When Kanye expresses honest frustration in an interview and the online gossip-matrix categorizes said interview as a “crazy rant,” that’s a value judgment. The Lowe interview that started all this is not the last words of Dutch Schultz; whether or not you agree with Kanye’s assertions, nothing he’s saying is particularly hard to understand. “I do think that somewhere in you, you want people to understand where you’re coming from, is that true?” Kimmel asked West, as if there’s anyone in the world who aims to be misunderstood.

Kanye is prone to hyperbole and self-aggrandizement and false equivalencies, and he refuses to use self-deprecation to make himself into a sympathetic character. He legitimately cannot believe that the world’s cultural/financial gatekeepers are hesitant to bankroll the moves he wants to make in the worlds of high fashion and technology and water-bottle design, and he believes that said gatekeepers’ implacability is ultimately about an entrenched power structure’s resistance to class mobility. But even if you reject the premise that classism affects people at Kanye West’s level, the fact that he’s out there asserting otherwise in public doesn’t make him Amanda Bynes.

At some point in the future, maybe Kanye will have a real conversation about these issues with an interviewer who isn’t a professional comedian with marks to hit like Kimmel or a cowed fanboy like Lowe, who asked West at least one question that ended in “bravo, dude” rather than a question mark. And maybe once that happens, it’ll be harder for the entertainment-news misunderstanding-machine to write off what he’s saying as Krazy Kanye At It Again™. Just kidding! Kanye could travel back in time and hold his own against Socrates in classical Greek and The Wrap would write it up as “Kanye’s Toga Tantrum” the next day. All that aside, last night was still amazing television. It’s not every night that you get to see a talk-show guest both paraphrase sociologist Stuart Hall’s assertion that race is the modality in which class is lived and argue that Kim Kardashian deserves a Walk of Fame star in the same segment. Curious about what it was like to be at the eye of this hurricane, I got Kimmel on the phone.

I really enjoyed last night’s episode of Kanye West Live! featuring Jimmy Kimmel. I don’t know if I’ve ever seen you get run over like that.

Well, y’know — one thing I learned on the radio is the value of shutting up and listening. He had a lot to say and he seemed very passionate and I felt like I was absorbed by it, and I thought the audience was too. They told me afterward that in the green room you could hear a pin drop, which is rare. Usually no one in the green room is paying any attention to the show.

He was staring directly into your eyes the entire time.

So that laser focus didn’t rattle you?

Click here for all of our interviews with fascinating people from the worlds of sports and pop culture.
I never mind that. If that’s what I was thinking about at that time, then I wouldn’t have actually been listening. Which does happen sometimes. From time to time, especially when the show first started — I could zone out while I’m doing the monologue. My mouth will be talking and my brain is focused on some guy who’s picking his nose in the corner of the audience. But when I’m engaged, as I was last night, I don’t think about anything except what the person is saying.

I imagine that when you started doing this show 10 or so years ago, creating a forum for a national dialogue about race and class wasn’t on your bucket list.

Well, really, there was only one thing on that list, and that was sucking helium balloons with Mike Tyson. And I achieved that about four months in. So it’s all been gravy from there.

Was there a point after the sketch aired that you began to realize that Kanye’s reaction was more than just a celebrity not being able to take a joke?

Yeah. I think [Kanye] said it best. I think he said that he reads and sees a lot of things that frustrate him, and the difference is that in this case he was able to call me, whereas he isn’t able to call TMZ or whatever it is that bothers him. And I have to say, I did relate to a lot of the things that he said. Personally, I went through many situations where people hold what you’re good at against you. I was a very good producer when I was on the radio, and I’d write comedy for the guys I worked with. And because I was very good at it, the general managers at radio stations I worked at told me I was a behind-the-scenes guy, and I shouldn’t be on the microphone. I should be behind the scenes, supporting the guys on the mic. And, y’know, I wind up hosting a network television show. And I remind those guys of that every time I see them, as much as I possibly can. So I can see how he’s frustrated. I don’t know anything about fashion. I don’t know who’s good at it, who’s not good at it. For all I know he could be the greatest or the worst fashion designer in the world. But I do understand that frustration.

You admitted to Kanye last night that when you first aired the sketch, you’d only seen a few snippets of the original interview you were parodying. Did you go back and look at the whole thing after all this stuff happened?

Yeah, I did. I really, really focused on it the night before Kanye was on the show. I watched it and I read the transcript, to follow along with it. I saw that he was very serious, and he felt like he’d made some good points — I’m sure that’s debatable, depending on your point of view. He then felt like I’d diminished it by making a joke out of it.

Did you agree with that, once you saw it?

Well, I think that — it would have been helpful if we’d both had more context, on both sides. He said he didn’t even watch the whole [reenactment sketch], which is a minute and 20 seconds. [Laughs.] That’s not a lot of time to devote to something.

I thought about that afterward. I mean, it’s not very long. There’s a good lesson in there somewhere, I just don’t know what it is.

Do you feel like you’ve learned anything from the reaction?

Yeah. The lesson is, if you get yourself in a situation like this you will get huge ratings on your television show.

OK, fine. But in terms of context: You mentioned last night that you’ve done this bit before, a few times, with kids playing people like Lady Gaga. Do you see that there’s a difference between portraying the black guy as a child and doing the same thing with Lady Gaga?

I don’t think the fact that he’s black has anything to do with it. In fact, I didn’t know he was black until you brought that up. I just think it’s about somebody who jokes around and somebody who doesn’t. Kanye’s not a jester. He’s speaking seriously, and I guess it wounded him somehow.

He got a few zingers in last night.

Well, it was funny — what the home viewers didn’t see is that when we played the clip of the kid, he was laughing through the whole thing!

And you guys seemed pretty chummy during the commercial breaks. What were you saying to each other?

Well, you saw the picture that I showed of him and my father? I told Kanye that [before Wednesday’s show] my dad sent me an e-mail like, “Hey, do you want me to come down?” And at first I thought, Oh, my dad wants to come down in case I need some kind of protection. Keep in mind that I’m a 45-year-old man. And then I realized, he asked if I wanted him to come down because he thinks he and Kanye have a relationship, because they posed for a picture together.

He could squash this.

Yeah. He could help smooth this over for me. I told Kanye that story, and he laughed pretty hard at it, and then this morning he sent me an e-mail saying “Thanks for talking last night, and tell your dad I said what’s up.”

How did Kanye West and your dad end up at the same wedding? Whose wedding was it?

My partner, Daniel Kellison — and by the way, weirdly, last night was exactly five years from the wedding. It happened to be their five-year wedding anniversary. We were producing a show [with Kanye], a puppet show, called Alligator Boots, for Comedy Central that did not get on the air. But he and Daniel became friendly. We’d been working together for a couple of weeks, and he decided to come to Daniel’s wedding. Which was not a celebrity affair. It was a low-key family wedding in Austin, Texas. And for some reason Kanye couldn’t get a private jet, so he flew out on a non-first-class Southwest Airlines flight.

So that’s where the sense of personal grievance in Kanye’s tweets came from? That tone of “I thought we were friends”?

Yeah. Maybe so, maybe so.

So who called who?

Y’know, he took down his tweets. And I felt like that was a conciliatory move. And then I sent him an e-mail, and we exchanged a couple of e-mails, and that was that. And then he sent me an e-mail saying he’d like to come on the show and talk about it. So we worked it so we could get him on Wednesday. Don Rickles had just canceled, so it all worked out.

See, now I wish Rickles had been in that room.

I know. I was thinking about that. Strangest pairing ever.

You could pretty much have quit after that and everyone would understand. There’d be no mountains left to climb.

I could have just walked out of there in my suit, got in my car, and never returned.

You Can Dig It: Minecraft Pocket Edition, Terraria, and SteamWorld Dig