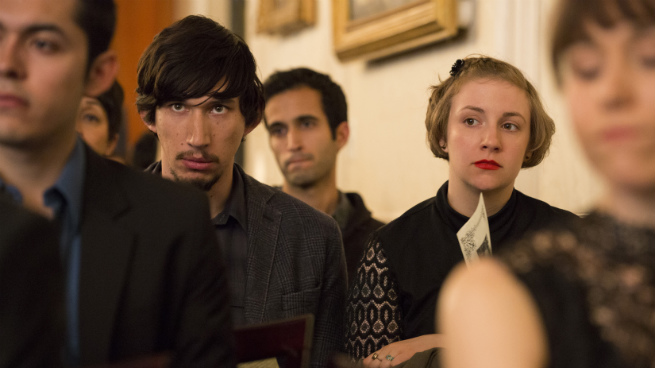 Emily Yoshida: I want to just transcribe something from the end of this weekend’s Girls Super Bowl spectacular so that we may all appreciate it in full:

Sweet Caroline. I’m gonna guess that was Gaby Hoffmann’s farewell to the show for the time being (it’s the last episode listed on her IMDb) and as such, wow. Such wow. I’m still not entirely sure what her purpose was during her visit; but she managed to both make Adam seem sane and really bring Hannah’s sociopathic nature into the broad daylight, and that has been an interesting shift, if nothing else. She also yelled a lot and felt strongly about things, which was nice.

I’m going to miss her. Especially since, as you alluded to, she made Adam and Hannah more dynamic by being chief instigator and the occasional — albeit mildly unstable — sayer of truths.

I very much enjoy how Lena has written her character as someone who is becoming so very unlikable as the episodes go on. She’s the absolute worst in this episode. She gets kicked out of a funeral by Jon Hamm’s amazingly cheekboned life partner Jennifer Westfeldt, and tells off her dad like the brat that she is, while it’s clear he’s about to drop a health bomb on her. You know, something along the lines of “Hey, Hannah, I think I’m dying.”

Also, for the first time in my history of watching this show, I repeatedly laughed out loud. Like a real laugh. Not one of those that you feel pressured into doing because someone next to you is laughing. Or one of those “Yeah, I’ve been there” chuckles. I’m talking “I just saw a comedy bit and now I am laughing” laughter. Much hahaha, indeed.

If you can’t figure out what scene I’m talking about, Yoshida, I’m going to just embed Bob’s Burgers GIFs for the remainder of this recap. So maybe get it wrong on purpose?

Yoshida: Was it the cat? It’s gotta be the cat. I want to get this right, because I’ll admit I’m not the most conversant in Bob’s Burgers GIFS. If I am wrong, feel free to Burg away while I opine about the difficulties of the female antihero.

Browne: That was great, but NO NO NO NO MUCH WRONG.

Hannah meeting with the publisher and her assistant. You know, the laughs. And the side-eye. And the jokes about Tombstone Pizza.

I understand getting distracted by the cat, especially because of my love for all things Kitten Bowl, but come on.

Yoshida: Oh yeah, that was very much a “sketch.” I found the “game” in that scene. I knew that scene was going to be full of jokes once the editrix said, “I get you, Hannah Horvath. I get you and I like you.”

Question, Rem: Now that this show seems to be trending toward Curb-style cringe humor with a more or less irredeemable protagonist, does that make it easier to watch? I’m not sure I have decided. I know an artist is not responsible for how people interpret his/her art, but I can’t help but feel like there’s something kind of irresponsible about this show encouraging the proliferation of young “Hannah Horvath types” in coffee shops across the nation, and then slowly turning her into the last person you’d ever want to feel a kinship with. (I would of course argue that she has never been sympathetic, not once in two and a half seasons. And I just had a friend get mad at me after watching The Talented Mr. Ripley because I expressed a kind of tragic sympathy for Matt Damon’s character. And he murders people with oars.) Do the high school– and college-age bloggers who think of themselves as Hannahs see how awful she’s become? Do they recognize the flawed line of thinking when she laments that the only story worth telling is the one Mill Creek is holding from her, a.k.a. her own?

I’m finding myself, with each passing episode, losing my original relationship with this show, which was always Lena first, Hannah second. Everything Hannah (and the rest of the characters) did was somehow a representation of who Lena was. And her beliefs. And how she saw the world. There was very little separation between the creator and the character(s).

Now I’m beginning to treat it like a show that happens to star the show’s creator. Yes, that’s right, like a sitcom. And with that, the emotional investment that I had left in the show begins to slowly wane. The “I’m in my twenties and this show is about people in their twenties and it’s by someone in her twenties” investment. But with that, I’m starting to enjoy watching the show more. Which seems backward — less investment equating a more enjoyable watch.

But it kind of makes sense, now. It’s like reading a book for school and feeling the need to underline the entire text. And then two years later, picking it up again and giving it a pleasure read.

Yoshida: I guess I just don’t find it pleasurable at all, though now I’m a little more assured about its priorities, at least. In a way I’m coming back to the point of contention I had in the first season, which is that all of this probably works far better on a non-twentysomething, non-urban-dwelling viewer as some kind of weekly exotic vacation to Millennial Narcissism Island. Hannah’s disregard for her dad’s procedure (and thus the show’s — we never do find out what is up with Mr. Horvath) and her absolute certainty that her only well of inspiration as a writer is herself and her willingness to “go there” just hits way too close to home. I know those people in real life, and I’m sure you do too, Rem, and I guess I think it’s too serious of a generational personality epidemic to just sort of shrug and giggle about. It’s gross, and the show just comes a little too close to nihilistically condoning it like it’s “just part of growing up in this age of antidepressants and Twitter.” That may very well be true, but none of the characters are fighting it in a meaningful way, so what can we reasonably expect to learn by spending time with them? It just seems so dark and pointless.True Detective gets me more amped and thinky about the human condition. Super Bowl XLVIII champions the Seattle Seahawks get me more amped and thinky about the human condition.

Browne: Maybe she’s ultimately agreeing with or validating what the olds say about us when they write about us, which is typically: “This is the lazy generation, the spoiled generation, the forever self-referential generation.” Maybe Lena’s essentially saying, “I know we don’t like being told that about ourselves, but we kind of are.”

Is there a “but we have to do better/we have the power to fix it” on the other end of that? That I don’t know. But if things are hitting close to home, she’s doing something right. I know you said you know people like that, but every now and then there’s a scene where you have to check yourself, just to make sure you aren’t becoming a character from Girls.

That’s kind of amazing. Yes, the entire inconsequential nature of the things happen on the show is gross, I agree. But it’s not worthless.

Yoshida: I guess she’s right about how much we suck. (Oh, and I said pointless. Not worthless; no art is worthless. Pointless.)

Update: The Super Bowl Set a New Ratings Record With an Average of 111.5 Million (!!!) Viewers