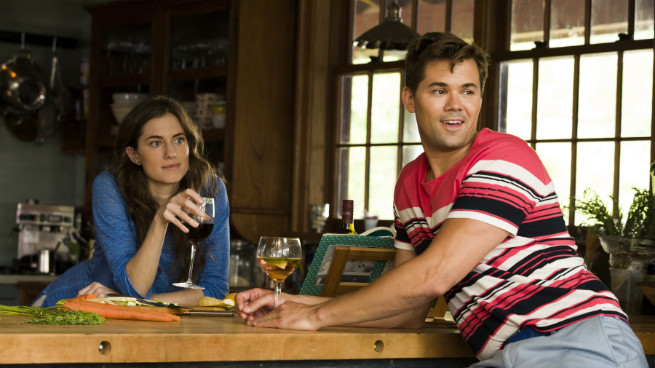 Emily Yoshida: Dear Rembert, have you ever had a friend who had a really terrible quality, like narcissism or a heroin habit, but they had figured out how to process any criticism lobbed their way by shrugging their shoulders and going, “Well, nobody’s perfect! My flaws are just a part of my charm!” What both that friend and the television show Girls fail to realize is that being self-aware of your more unpleasant attributes doesn’t make them more interesting or tolerable.

Sure, sure, the show commented on itself via Shoshanna in that blowup fight scene, but how revelatory does it feel when we’d all been thinking it for three seasons? Being terrible and saying “I’m terrible!” to a room full of people who think you’re terrible doesn’t make you less terrible. In fact it probably means you have even less hope of ever becoming un-terrible, because you’ve found a way to identify with it.

I’m already exhausted. Would love to talk about Daffy Duck vs. Donald Duck, though. The original Antz vs. A Bug’s Life.

Rembert Browne: I know you’re fed up. But just hear me out.

That blowup scene is an exercise in stating the obvious, in that it finally articulated what the viewers have thought — and known — about the characters for seasons. But, as much as I tend to view Girls as a commentary on [fill in the blank with your favorite cultural trope], all I cared about in this episode was friendship. Real, adult, failing friendships.

It’s hard to write about the idea — and reality — of your “good friends” not actually being your friends. The fact that some of your rocks, you barely even like — the people you feel stuck with, because you forgot what it was like before they were around. And conversely, the people who feel stuck with you, for the very same reason. But those friendships often exist, because they’re comfortable. And they’re convenient. And you all know you’re growing apart, but no one wants to acknowledge it. Or accept the fact that you drift away from people, the people you once created so many good memories with. And ultimately, loving people, but not necessarily liking them.

That’s what I got out of this episode, and really nothing else. Nothing about that was fun to write. But it’s universally experienced feeling, so I’ll live.

Yoshida: Do you think our Girls love each other, though? The only instance of real friend-love I can recall recently was when Hannah went to go pick up Jessa from rehab and told her to stop running away. The “bonding” Marnie and Hannah did at the beach house prior to the fight was just the kind of overenthused babbling you do when you’re drunk and feeling alienated at a party (which, pro tip, usually only makes you feel more alienated). The last time I felt like Marnie and Hannah really loved each other was their big first-season fight, if only because you don’t get into fights like that with people you don’t care deeply about. And nobody seems to give a second thought to Shosh, which, to her credit, she seems to have picked up on.

I think a lot of the increasing off-ness of the last couple seasons has to do with the fact that these people have barely anything to do with each other any more, and would never hang out, unless there was a script telling them to go on weekend getaways now and then.

Browne: You’re right, maybe “love” is too strong. Who knows. Regardless, something’s keeping them in each other’s lives. And it’s deeper than a script, simply because this is a real situation. It’s one of the stories of postcollege. Being in the same place for four years with new people is essentially the script. The thing that keeps you together. And so much of postcollege is either disappearing from those people as soon as the script ends, trying your best to hold on to the magic with your once-best friends, or actually remaining close. Losing touch with some people, and then working hard to get back on track. Or losing touch with people, and deciding — though it typically goes unspoken — that losing touch is OK.

There’s a lot in that scene that I liked. It’s a smart scene. It’s a hard scene to pull off, but they pulled it off. In the face of the never-ending criticism of the show’s realism, this is a prime example of capturing something real. And — finally — something that doesn’t require being in the typical, infinitesimal target audience of this show.

Yoshida: It’s definitely a realistic dynamic, no question. But hang on, can we talk a little bit about Elijah? We haven’t seen him for a second, and it seems like the time away and his new one-sided love have turned him into a cartoon. I actually really liked Elijah as a supporting character in the first couple seasons; there was something nice about Hannah striking up what seemed to be a supportive, familiar friendship with her gay ex, despite the awkwardness that arrangement would seem to imply. I can’t tell if we were meant to understand that Elijah’s new friends have made him into a braying, bitchy, fat-shaming caricature, or if it was just inattentive writing. It bummed me out, though. It feels like nobody can get spend too long in the world of this show without becoming mean.

What else? The choreographed dancing? What did it mean when they were waiting for the bus at the end and after the fight they started going through their motions again, joylessly, almost against their will? Don’t answer that question!

Browne: I can’t wait to answer that. But not yet. Because you’re on to something with regard to Elijah.

He, like everyone else on the show but Adam, is now a sitcom character. Even with this somberly awesome ending to the episode, this show is increasingly structuring itself like a sitcom. It’s confusing to parse, but essentially, dialogue is happening and situations are presenting themselves that seem like they’re included more to make you laugh and less as accurate representations of what a specific character would say or do in a situation.

I’m starting to confuse myself, but here’s an example. Sometimes examples are better. The scene where Marnie’s talking about what she wants from the weekend. And she mentions something about face masks and watching The Kings of Comedy. That’s a really good line. But it’s just that, a line. It’s completely absurd coming out the mouth of Marnie — even with her absurdities — but it’s a good bit. Because I chuckled.

Maybe I’m way off on this, but I think I’m not. I think these situations are happening more and more. And as I’ve said in previous weeks, as the show begins to feel like a comedy instead of a show that can occasionally be funny, my opinions (and investment) in the individual characters dwindle. Which leaves me concerned with only two things: 1. being entertained and 2. larger themes/issues tackled.

I say all of this to essentially admit that it’s harder to care about Elijah this season because he’s now a character. Not a representation of something.

Yoshida: Here, take a North Fork Fizz, it’ll help you get your bearings. I think you’re right about the characters becoming more like sitcom characters, but I think the problem for me is that the show still wants to be a serious commentary on a certain generation, to sneak in some big truths with its dance routines. But at a certain point it becomes impossible to do that when the goals and wants of your characters and preoccupations are not consistent from episode to episode.

Honestly, I don’t really care about realism; I don’t think it automatically equals meaning or profundity. I care about cohesion, because it’s hard to enjoy a show that frequently feels like it can’t see its own tail. It seemed strange to me that Marnie and Elijah spent more time talking this week than Hannah and Elijah did, because Hannah and Elijah’s relationship (I thought, anyway) was the more meaningful one that got screwed over.

Browne: What if I tried to make the claim that all three seasons have been a buildup to that fight? Would you accept that? Would that make you happy? Or does that make you want to barf and/or ralph?

Yoshida: I prefer to subscribe to the True Detective school of thought, in that we perceive these episodes linearly when in fact they all simultaneously exist in a flat circle of time-space. And I’m super happy about that and only want to barf and/or ralph a little!

Jimmy Fallon's First 'Tonight Show' Is Coming Right Up, and He Might Be a Tiny Bit Nervous