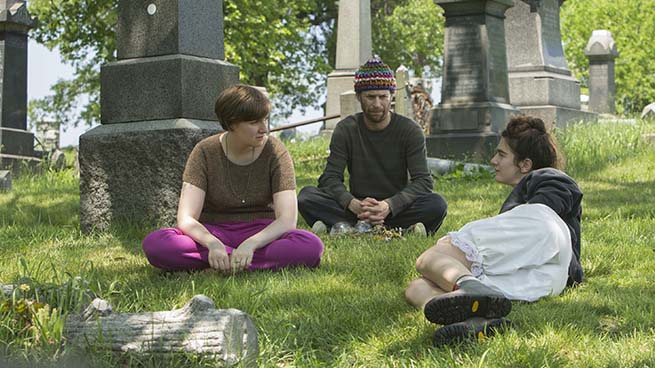 Rembert Browne: So I’m just gonna get this out the way up front: I’m writhing with jealousy that Lena decided to make fun of Gawker and not us. I have friends who write there, and I can just sense them popping early-morning bottles in honor of Lena trying to critique their existence and worth. And what am I left to do? Endure a Monday morning in a world with four-time Grammy winner Macklemore and the reality that Lena dedicated a sizable portion of an episode to making fun of a website that wasn’t ours?

Remember in last night’s Album of the Year announcement when Taylor thought she won, because Alicia Keys said the letter “R” and Swift thought it was for Red but it was really for Random Access Memories?

That’s how I felt when Lena said the letter “G.” I thought it was our time. But no, she went with “Gawker” instead of “Grantland.”

Sure, this was the best episode of the season so far, but I’m beside myself right now.

Also, everything about that scene (and everything I just wrote) reminded me that the bubble of people who care about this show shrinks with every episode. At this rate, Episode 8 will be about getting (and then losing) an internship with Horse_ebooks. You know, because the horse died.

The recaps must continue. They must continue until there is an episode about our recaps. Then, and only then, can we stop.

Emily Yoshida: Do you think this show is only fun and/or important when people are yelling at each other about it? I actually thought last night’s episode was the best not only of the season, but of the entire series, partially because it was made fairly clear that the show, and not just us horrified viewers at home, thought Hannah was a sociopath. But now it’s as if the anger parade has wandered off and I have nobody to defend my temporarily pro-Girls position against. (You’re not a fighter, Rem, bless you.) I feel like we are in some Second Life re-creation of a Real World house long abandoned by all the other avatars, and I have this big pile of Linden Dollars and nowhere to invest them. I decided I really like True Detective last night, too. Big night for me and Macklemore.

I think Girls will get around to its Grantland reference. I can totally see Marnie eventually finding love with a kind bro sportswriter from Fort Greene who takes her to Knicks games but also gets all her Sex and the City references. Speaking of which, do you think Marnie’s off the show yet?

Browne: We may be weeks away from the next Girls poster being Hannah, Adam, Caroline, and Ryan Lewis.

I’m glad we agree on this being the best episode of the season. But I’m not convinced that means it was a good episode. But maybe it was? What is true is that it had a plot — an interesting one — about death and mourning and grief, handled really cleverly. Perhaps too clever for characters like Marnie and Shoshanna to be that present.

Gaby Hoffmann is a really good actress. Seriously. She told the hell out of that fake story. Her character could be so insufferable, especially within the world of Girls, but she’s pulling it off remarkably well.

This is a hard episode to go back and forth with, because it wasn’t just random scenes splattered together. It was almost like one big scene. And I’m not mad at that.

Yoshida: It held together around a theme in a way that Girls, for some reason, always seems really hesitant to. I thought the flash-cartwheels through the graveyard laid it on a bit thick, but I appreciate Lena and Judd Apatow (who cowrote this episode) for owning what the episode was about instead of trying to be elliptical and disjointed about it.

Last week we talked about our 25th birthdays. There’s not really anything fun to talk about with this one. “What is the worst thing you’ve thought after a person you know died?” Don’t answer that question. “Have you ever thought about tricking any of your friends into thinking you’re dead so you wouldn’t have to hang out with them anymore?” Really don’t answer that question.

Do you think we’re meant to understand that Daniel died the night of Hannah’s party while on his Grindr bendr? Seems judgy. Also, Ray, having possibly gotten into an altercation with Daniel mere hours before his death, must be going through a lot of difficult feelings right now. No wonder he wanted to unwind and have a laugh at Marnie’s expense.

Browne: We can’t let this good episode get us down. We can’t write ad nauseam about the nonsense episodes and struggle for things to discuss on the linear ones.

I mean, we could … the Grammys were last night, after all. Willie, Merle, Kris, and Blake Shelton are kind of like the Girls cast, but with a few tweaks. So I’ll go there, if you’d like. But we could also just give this episode a salute and thank it, if anything, for being a cohesive 30 minutes of television.

A thought, though. I’m starting to lose my grip on who Lena is making fun of. Or critiquing. There seems to be a new target every episode, with this one being the media. Or the Internet? Or “kids these days”? I can’t tell.

I don’t understand this show. After years of Pretty Little Liars, maybe this is just too much for me.

Yoshida: Well, the show kind of retcons things that have supposedly been going on all along. Like Hannah having an active commenter profile on Jezebel, which allows the show to riff on blog culture for a second. In that way it is very sitcom-y. You know that if Hannah were real we’d be hearing about her fellow Jezzies and how many new Tumblr likes she got in the last hour in every other scene.

The show could benefit from a central mystery or monster-of-the-season. This will make me sound 1 million years old, but it would be nice if the four girls all teamed up together to solve a problem. That’s why I watch TV, after all, to see problems get solved. Maybe Charlie could start sending all of them anonymous texts and leaking more Marnie vids to the ’tubes, and they’d expose him and FORBID for Bitcoin laundering? So many potential plot avenues for the show got kicked off with Christopher Abbott.

Browne: So who finds out they’re pregnant next episode?

Yoshida: Caroline and Laird, if you want a serious answer.

Browne: Actually, strike that. I don’t want that. I want a caper. Actually, no. This is just me trying to turn this into Pretty Little Liars again.

Browne: Actually, I got it.

No pregnancy. Not yet.

Hannah gets her first big writing gig. At Jezebel.

Yoshida: Jezebel has been her Mr. Big all along.

Then and Now: The NY Filming Locations of 'The Godfather'