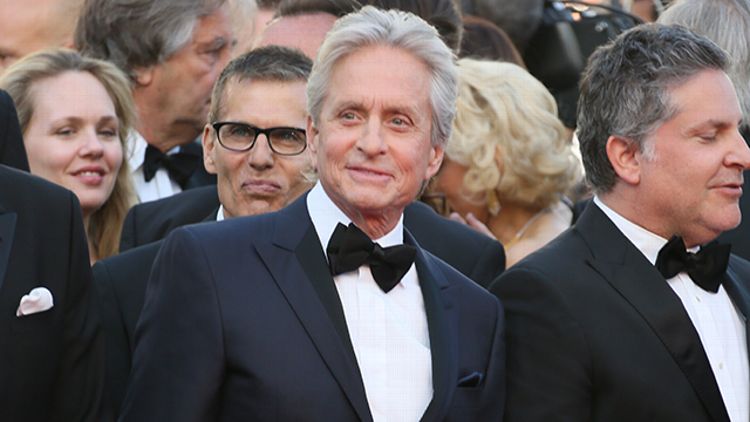 One of the most poignant moments of Behind the Candelabra, besides of course Matt Damon clawing at his plastic surgery mask of a face, was seeing Michael Douglas as a failing Liberace. The photos of Douglas that appeared in tabloids and online during his throat cancer treatments — and his appearance at the Wall Street: Money Never Sleeps premiere — were startling enough that obituaries were written in advance. Liberace notably died of AIDS, and in an interview with The Guardian, Douglas links his cancer with another sexually transmitted disease, HPV, and because he used the word “cunnilingus” everyone has to go giggle in the corner. I certainly hope the phrase “the vagina-glazed mouth of Michael Douglas” was meant as the highest compliment.

HPV still makes us uncomfortable despite the press it got in 2009 after Farrah Fawcett died of anal cancer, which also shares a link with the virus. According to the CDC, pretty much everybody has HPV, so spending your time considering its relationship with horrible cancers is understandably something you might be compelled to avoid if you’re planning to get down with anyone, ever. It was somehow easier to think that Douglas’s cancer was the result of decades of drinking and smoking (throw in drugs, why not). In 2010, Douglas told David Letterman that he believed that the cigarettes and booze, along with the stress of his son’s legal problems, had caused his illness. Shortly after publishing their interview, The Guardian probed doctors about the cunnilingus connection and quoted one as saying that “it has been established beyond reasonable doubt that the HPV type 16 is the causative agent in oropharyngeal cancer.” And even though Douglas claimed that if you have HPV “cunnilingus is also the best cure for it,” no experts chimed in to agree that more oral would cure it, so perhaps that was just rakishness. If it was, who could blame him? I think Douglas knew that his response would generate buzz, and I can’t imagine that he would have gotten a big kick out of revealing this information (as Jezebel says, “I’m sure Catherine Zeta-Jones is not at all mortified” — I doubt she actually is, but it’s not exactly an un-mortifying subject) unless he intended for it to make us confront our attitudes about STDs. Liberace’s AIDS was so concealed from the public that he had to be exhumed in order for his cause of death to be determined. While Angelina Jolie’s double mastectomy made us talk about the BRCA gene and women’s sexuality and health, for the most part with grave seriousness, Douglas’s statement brings us to the conclusion that he “really likes oral sex. Like, a lot.” Who doesn’t like oral sex, like, a lot? Then again, who likes to admit it to journalists?

When you or someone you love gets diagnosed with cancer, you occasionally encounter questions that seem to seek a cause, a reason, an exemptive risk factor that opens an umbrella over everyone other than the afflicted. The smoking, the drinking, the promiscuity, the sun exposure, the carpet chemicals, the wonky genes, the condo touching lots with a nuclear power plant, the hormone replacement therapy. Anything that could make you feel less like dissolving into a pool of your own disgusting mortality would suffice. Jolie has been rightly lauded for her bravery in bringing attention to one of these factors, genetics, and the debate that followed her preventative mastectomy made a sizable amount of information on breast cancer treatments available to people who would probably never have found it otherwise. A sex symbol having voluntary surgery to remove her breasts in an effort to increase her odds of longevity is beyond reproach; Us Weekly covered Jolie’s first post-mastectomy appearance with gushy prose (“healthy and radiant,” “her toned stomach”) and quotes like “I feel empowered that I made a strong choice that in no way diminishes my femininity.” And yet there sits Douglas with his “vagina-glazed mouth.” Is oral sex so taboo that we can’t replace our “OMG VAGINA” reaction with something more, say, “Uh-oh”?

In his interview, Douglas said he feels “blessed and fortunate” to have a career, and likewise to have his life. Behind the Candelabra postponed shooting for a year in order to accommodate Douglas’s recovery, he says, which included an all-liquid diet, radiation, and chemotherapy, and which resulted in significant weight loss. Is it OK to make jokes about Douglas’s love for pussy? Of course. It’s OK to make jokes about anything, as long as you pay the toll and consider the unfunny silhouette loitering in the background. In a way, Douglas was as courageous as Jolie, discussing sexuality and health in a less polished, but no less important, way. The comments on the Jezebel article are a good indicator of the fact that Douglas has done something to raise awareness: from people who have lost spouses to HPV-related cancer to arguments over when to administer the vaccine, Douglas’s “marathon cunnilingus sessions” provoked a worthwhile discussion. Why should Catherine Zeta-Jones be mortified by that? She — and we — probably has HPV, too. We’re all outside the umbrella. Michael Douglas just forecast the weather.

Game of Thrones, Season 3, Episode 9: It's Like 'Rains' on Your Red Wedding Day