Game of Thrones Season 3, Episode 6: ‘The Climb’ to Nowhere 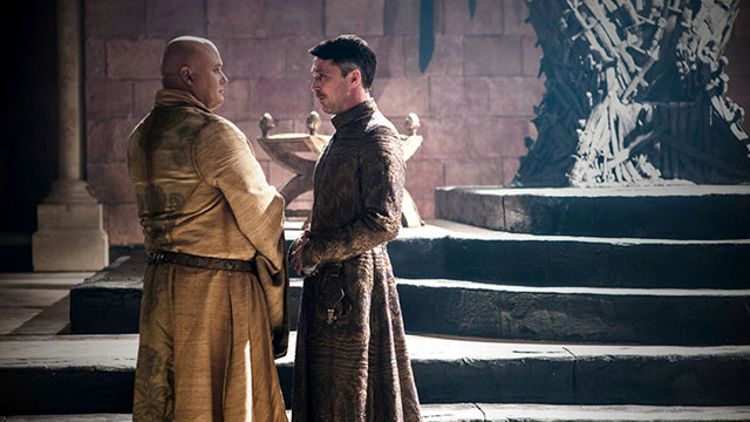 Lord Petyr Baelish may be small of finger, but he is large where it matters most: Few men in Westeros are his equal when it comes to cruelty, and none come close to matching his patience. These two traits alone make him a formidable competitor in the titular Game of Thrones, where the milk of human kindness tends to leave players all wet, and the hotheaded are usually the first to be decapitated. But as I watched Aidan Gillen stomp and preen all over his episode-closing monologue like Mayor Tommy Carcetti working a Baltimore press line, another thought occurred to me: Littlefinger’s unique set of skills would make him the ideal viewer of Game of Thrones, as well.

It’s no secret by now that for those of us abstaining from the original novels, the sheer weight of the story demands savage cuts and even more drastic changes of mind. Characters we’ve grown close to are abandoned on the fly, and we’re often forced to turn our backs on the most fascinating among them for hours, even seasons at a time. This capriciousness comes easily to Littlefinger; witness how quickly he adjusted his plans away from Sansa and how viciously he dispatched Ros, a once-trusted ally offered up as target practice for Joffrey’s hideous sadism. But more than anything else, Game of Thrones (the show) rewards patience and persistence, those able to sacrifice short-term satisfaction for the greater glories still to come. At the end of the hour, while Varys paraphrased Morrissey lyrics and clung to “illusions” like law and order, it was Littlefinger who kept his eye on the prize. “Chaos is a ladder,” he purred, making it clear that it’s never worth stopping to smell the flowers when the entire garden is there for the taking. “Only the climb is real.”

Littlefinger may be right, but sometimes it’s hard to agree with him. Apart from two sterling scenes, “The Climb” may well have been called “The Slog.” Like Podrick in a whorehouse, the episode never stopped moving, but it was hard to take much pleasure in the journey because the destination remains both distant and obscure. Look, I get it: Complaining about the structure of Game of Thrones at this point is like sending a meal at Craster’s Keep back to the kitchen. It is what it is, and nothing short of armed insurrection is likely to change it. And I’m sure that “The Climb” will play wonderfully when it’s viewed in its ideal circumstance, as the third straight “just one more” on-demand episode before falling asleep on the couch during a righteous holiday binge watch. But I have to admit to being occasionally frustrated by the inconsistency of Game of Thrones as a weekly endeavor. Partly this is because there’s no way to predict whether an episode will build to an exclamation point or drown in ellipses, but mainly it’s because I’m finding it harder and harder to settle for scattered bits of good when the show is so often able to be truly great. Resolution may be a long ways off, but is it horribly unfair of me to ask for a little more reward? “Early days, my friend,” is how Littlefinger justifies it, but every part of that sentence felt like a lie: We’re over halfway into the third season already, and the Future Lord of Harrenhal definitely doesn’t have any friends.

As always, I’m not saying there wasn’t much to enjoy. I’m just not sure it all added up to much. The most exciting, if chilly, part of the hour was Jon Snow & Co.’s icy ascent of the Wall. It seemed like such a classic girlfriend move for Ygritte to lend Jon Snow some carabiners left over from an outdoorsy ex (I bet his name was Avi, he had multiple Nalgene water bottles, and spent one summer getting “really into” trance music while working on a kibbutz in Israel), but she’s finally willing to admit that the two are actually on the same side of their flirtatious fighting. “We’re just soldiers in their armies and there’s plenty more to carry on if we go down,” she says, managing to work a solid double entendre into an otherwise serious observation about how the only person worth dying for in Westeros is yourself. Jon Snow doesn’t say much at all in return, as is his wont, but Ygritte doesn’t mind. She found out last week that his mouth is good for plenty of things other than talking. Still, she’ll accept a slip of the tongue, but not of his loyalty; should Jon betray her, she seems ready and eager to show her true colors as Lady Lorena, heir to House Bobbitt.

They make it to the top, eventually, despite a worrying lack of Sherpas and some serious undermining from Gareth, Warg of House Wernham Hogg. From the edge of the wall, Jon and Ygritte share a lusty clinch with a killer view. I know they’re mostly happy because they survived, but I wonder if on some level Jon is aware that he’s done something none of his half-siblings have managed in almost two years: actually gotten somewhere. Sansa remains stuck in King’s Landing, having missed the boat in all sorts of ways. (When your intended husband knows more about brooches and brocades than you? That’s a dealbreaker, ladies!) Robb is reduced to arranging marriages for his idiot uncle instead of winning wars, and Bran remains planted underneath a tree like an acorn, watching other kids have seizures and deading beef, or at least rabbit, between squabbling tomboys who are otherwise trying to protect him.

At least Arya has some interesting company surrounding her while she goes nowhere fast. The Little Lady remains a petulant ragebeast — her righteous bow-and-arrow lesson seemed a lot less fun after seeing what a peer with similar aim did to Ros — but I’ve fallen hard for her quasi-savior, Thoros, the accidental miracle worker of Myr. Paul Kaye is best known for comedic parts in the U.K., but he’s perfectly cast here as the sad, sozzled vessel for both untold quantities of rum and unimaginable powers granted by the Lord of Light. (Kaye is so good, in fact, he almost sold me on one of the show’s creakiest bits of Basil Exposition yet; when Thoros took a reasonable question from Melisandre as a good excuse to sit on a stone and unburden himself of his autobiography.) I appreciated the subtle way Thoros’s wobbly faith was contrasted with Melisandre’s hot-blooded fanaticism. While she’s using her higher power to help Stannis attain some for himself, Thoros found God in a hopeless place, praying over his dead friend not because he wanted to pray, but because his friend was dead. Still, the distinction doesn’t matter much to Gendry, the last bastard heir of Robert Baratheon, who’s shipped off to Dragonstone as … what? Bait? Raw genetic material for future smoke monsters? Either way, it’s a lot less fun than making armor-piercing arrowheads for the dudes. And it’s yet another lesson in the persistent unfairness of things in the Seven Kingdoms. The Brotherhood Without Banners also lacks loyalty.

After a merciful week off, Theon returned for another round of extraordinarily dull rendition. I promise book readers I’m not intending to troll them when I say how dreadful I find these scenes; no reveal is possibly worth this pain. Yes, Alfie Allen is good at contorting in agony, and his unknown assailant — who, we were helpfully informed, is either one of the late Lord Karstark’s sons or a liar or both; I’ve decided to refer to him by his original name, Oliver Trask from the County of Orange — loves doing horrific, unpredictable things. But so what? Of all the points Game of Thrones needs to reinforce in its third season, “horrific, unpredictable things happen” isn’t among them. Torture is generally unproductive in real life; the same is also true for watching it in fiction. Rather than learn what it looks like to have someone’s pinkie finger peeled like a fruit roll-up, I’d rather have spent those gross, precious moments doing something productive, like watching Jaime Lannister try to cut meat. (Is there any question that Nikolaj Coster-Waldau is the MVP of this season? Since awkward marriages of convenience are all the rage, can’t Jaime and Brienne elope to one of the Free Cities — whichever one is the Vegas of Essos — and just let things get weird? She’s practically dressed for the ceremony already!)

While the little pawns suffered and schemed, it was left to the grown-ups to provide “The Climb” with its best scene. Tywin Lannister vs. Olenna Tyrell (a.k.a. Lady Karsnark) was a heavyweight title bout without a single punch, a savage sword fight devoid of any blood. After weeks of establishing that Tywin Lannister seated at a desk is the single scariest sight in any of the Seven Kingdoms — worse than an army of unsullied, a barrel of wildfire, or a Clegane with bedhead — Lady Olenna not only took a seat across from the world’s most corrosive correspondent, but she more than held her own. Would you have the steel to inquire about Tywin’s own childhood horseplay? Or suggest that Cersei has more brotherly love than the entire city of Philadelphia? All while sonning her own grandson (“A sword swallower through and through,” she quips. Lady, let me do my job over here! I don’t come down to where you work and slap the lemon cake out of your hand!) and resisting a man whose entire reputation rests on his never being resisted? It was such a pleasure to see someone with the temerity to stop Tywin’s incessant scribbling. For all his airs and past victories, Tywin strikes me more and more as nothing but a preening bully. And how do you stop a bully? You turn the tables on him. And in this case, the table is a desk.

While Tyrion and his sister bonded glumly over their shared Carnival cruise line to hell, Olenna grabbed the quill and demanded a rewrite. That’s real power in the world of Game of Thrones, the sort that Littlefinger reaches for and the kind that I bet David Benioff and D.B. Weiss occasionally wish they had, especially in the midst of digressive and down weeks like this one. At the end of the day — or at least at summer’s end — it’s always better to be the author in charge of the story than another loyal disciple stuck following the script.