‘Game of Thrones’ IMAX and Season 5 Trailer: Go Ahead and Get Psyched Up for a Return to Westeros 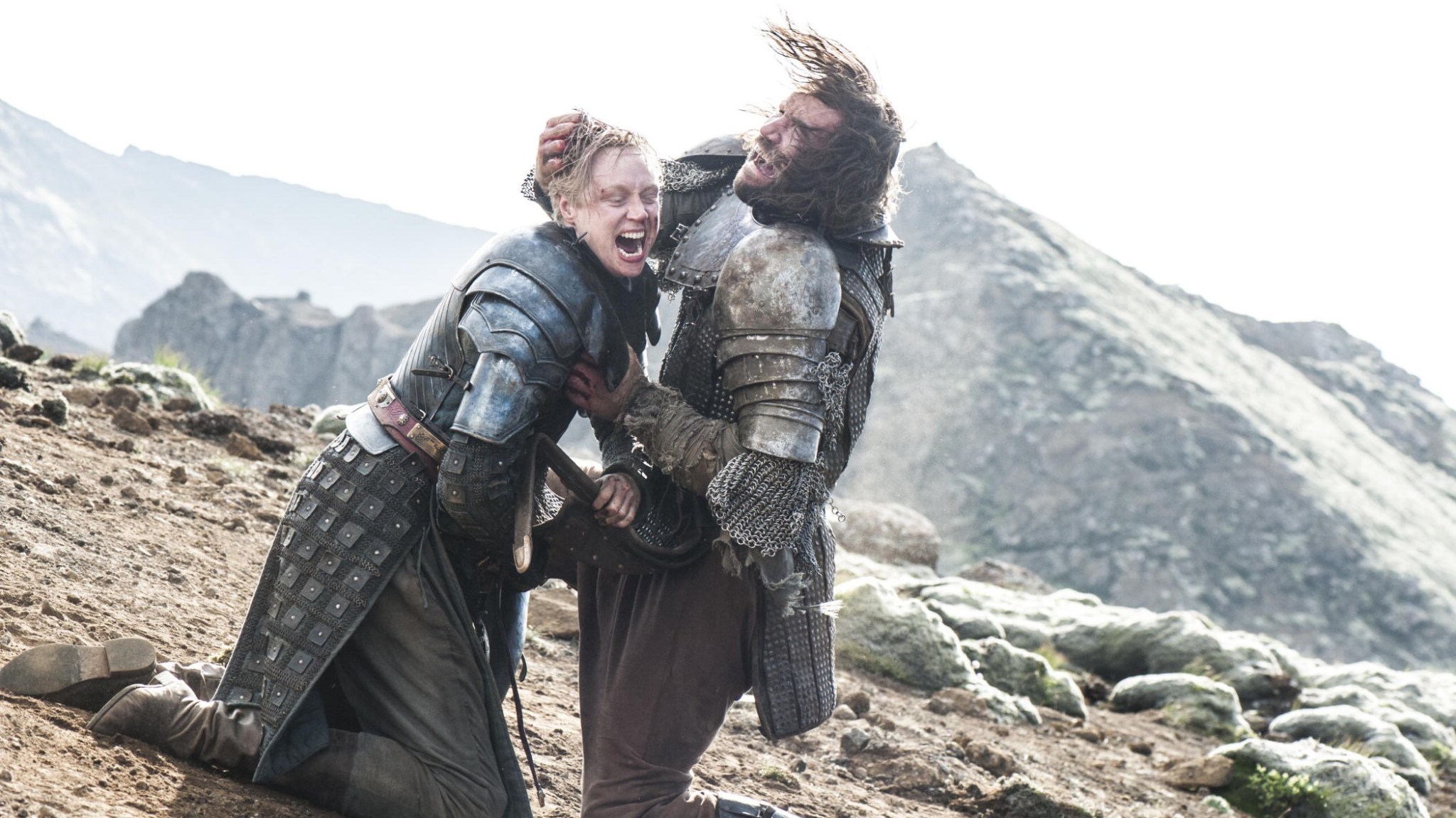 A great story is a great story. This is the core takeaway I settled on after seeing Game of Thrones in IMAX. As fragmented as the media landscape has become, and with the historic balance of power between television and film as destinations for prestige storytelling now firmly tilted toward TV, seeing Thrones on the big — really, really big — screen is an experience that manages to simultaneously validate every era of mass media that its source story touches.

The books are runaway best sellers. The show is television’s most ambitious, most expensive, and most pirated series. And the thrill I felt seeing it in IMAX, not to mention the screenings being successful monetarily, shows that film still holds its place as the ultimate destination for the popular story. A Song of Ice and Fire is capable of getting people to pay $22 a ticket to hang out with a bunch of strangers and watch reruns that are easily available at the click of a mouse from the comfort of one’s home. It’s a pretty amazing accomplishment for a gargantuan nerdfest of dragons, ice zombies, and incest.

The larger format quite naturally leads to a new level of immersion in the images and a deeper appreciation for everything that makes up those images: the lived-in production design and costumes, the epic action, and the actors’ performances, which are nearly uniformly incredible.

The IMAX screenings focus on the final two episodes from Season 4, “The Watchers on the Wall” and “The Children.”

Neil Marshall’s direction on “The Watchers on the Wall,” as with his work on Season 2’s “Blackwater,” favors clarity for the depiction of chaos. Everything is presented in way that provides the viewer with a perfect — and at times a god’s-eye — view of events by clearly defining exactly where each scene happens in space. This adds to the viewer’s understanding of just how dire the situation is for the Night’s Watch and imbues the battle with a real sense of suspense. As the Wildlings extinguish their campfires and charge up the hill toward Castle Black, the camera behaves like a drone, looking down on the action from 500 feet as it flies from the gully, across the open trail, over scree and boulders to the castle and its courtyard, and up over the Wall to the signal fire beyond. The Watch is caught in a vise.

We see Jon Snow jump down from the elevator and slash his way to the courtyard. The camera turns counterclockwise from him, sweeping across the action and up to the walkway at the corner of the castle, where Ygritte is firing arrows (they’re just that close!), down to Styr the Thenn axing some dude by the blacksmith’s kiln, and back up to Tormund, laughing maniacally from a staircase at the mayhem all around. A person could draw the layout of Castle Black from memory with a decent level of accuracy just from watching this episode. This is a necessary approach for a show with roughly 10,000 characters, each of varying degrees of narrative reliability, and each with innumerable interwoven arcs. And the IMAX format rewards that clarity and sweep, translating the battle into something epic. Is it the siege at Helm’s Deep? No, but it’s credibly close.1

IMAX renders the Brienne/Hound fight in “The Children” with a savage heft that literally had the audience holding its breath at the viewing I attended. One of the show’s core themes is the tension between the chivalric facade of the established order — princes and queens and honorable knights in white armor on majestic steeds —  and the brutal truth of how that order expresses its power: children murdered with impunity, sacred rituals insuring the safety of guests used as vehicles of betrayal, the shield that guards the realm as a receptacle for Westeros’s criminals, legal rights enforced via blood-magic smoke baby.

Brienne versus the Hound casts two of the realm’s most notable outsiders in tragic opposition to each other. Brienne plays by a set of rules that says oaths and good intentions can safeguard the weak while essentially rejecting her existence. The Hound understands all too well that bespoke knights in gilded armor are more often than not just rapists and murderers with great family connections, and he’s no longer willing to pretend that isn’t the case. They should be on the same side. Instead, they’re trying to kill each other. When Brienne finally wins, it isn’t because of her gold-and-jewel-encrusted Valyrian steel sword — it’s because she bit off the Hound’s ear and bashed him repeatedly in the face with a rock until he tumbled off a cliff.

The quality of the acting performances is, if anything, more impressive in IMAX. Even Kit Harington’s ever-dour Jon Snow enters a zone in which the actor’s style and the written character’s lack of emotional latitude are basically inextricable from each other. Sure, Harington’s delivery can be stilted and awkward, especially when paired with John Bradley-West’s Samwell, who is buoyant even when fearing for his life. But Jon, the character, is not exactly an emotionally available, just-one-of-the-dudes type of guy, either. This is a person who’s never really been accepted anywhere and whose most cherished memory is breaking his sworn vows in a cave while undercover with a pack of barbarians dedicated to killing him. And at any rate, Harington makes any and all doubts about his acting chops disappear as long as he’s hacking away with a sword. The guy is a bona fide action star.

A question I found myself asking during “The Children”: “How fucking good is Maisie Williams?” Over four seasons, she’s taken Arya from a classic tomboy to an Oliver Twist–esque scamp on the run, to a cynical and increasingly spooky killer in the making. The way Arya sits, unblinking, and listens to the Hound’s increasingly desperate attempts to provoke her into killing him, then steals his money and leaves him to die alone, is a subversion of the expectations we’d had based on how their relationship had evolved that season. At times, it seemed as if the Hound was acting as a surrogate father figure, and there was genuine, if muted, warmth between the two. But he was always on her kill list and she never forgot what he was. In the end, she had something he wanted, and her revenge was to make him beg for it, then walk away without giving it to him.

The confrontation in “The Children” between Cersei and her father, Tywin, also crackles in IMAX. Thrones will miss Charles Dance. One of my favorite ironies at the core of the show is that the realm really would very likely have been better off with Tywin running things behind the scenes. He was far and away the most competent and overt power broker in Westeros, a master chess player whose primary weakness was that people do not aspire to be pawns. When Cersei tells him that the rumors about her and Jaime are true, and Tywin refuses to believe it, it’s a rare moment of willful blindness from the usually rational, coldly realpolitik Lannister patriarch. And it’s low-key devastating. He saw every angle in the game except the one he didn’t want to see.

After the episodes was the official Season 5 trailer, arguably the best reason for the GoT fan to see the show in IMAX. Season 4 had far and away the best source material, but I am much more excited for Season 5 than I have been for any other season of the show.

A Feast for Crows, the fourth (and most fragmented) book in the series, will — judging from the trailer, the trickle of casting news, and production rumors — provide the bulk of Season 5’s story. But one of the strengths of the show has been the arcs and characters showrunners David Benioff and D.B. Weiss focus on, change, or outright jettison. Feast and Book 5, A Dance With Dragons, were originally conceived as a single tome. But the sheer volume of material George R.R. Martin produced for this megabook actually exceeded the capabilities of modern binding techniques, and so Feast and Dragons were split up. Because of this, Feast contains numerous interesting characters, places, and plots that never seem to go anywhere or connect to the larger story in a clear way. This means that the showrunners have the closest thing to a blank check, from a creative license standpoint, they’ve ever had. That’s exciting.

Some quick thoughts on the Season 5 trailer:

• Now that Tywin is dead, King Tommen is still in the regency phase of his reign, the Tyrells are ascendant, Jaime is basically a cripple, and the source of Cersei’s ire, Tyrion, is somewhere out there in the world, get ready for an unrestrained Cersei.

• With Stannis Baratheon, the Boltons, a new and more treacherous political reality emerging for an increasingly rudderless Night’s Watch, thousands of Wildling refugees requiring food and shelter, and the Others growing in strength, this is the season that North-centric story lines come into their own.

• Sansa has had the slowest-burning arc of any of the main characters. Once a true believer in princesses and fairy-tale myths, Sansa, we saw last season, finally uncomfortably came to grips with the innate power of beauty and its effect on those who want to possess it.

• Arya in Braavos at the House of Black and White? Fuck yeah.

Super Bowl Commercial Shootaround: All the Fast Cars, Cool Insurance, and Unfathomable Sadness We Can Sell You Between Timeouts