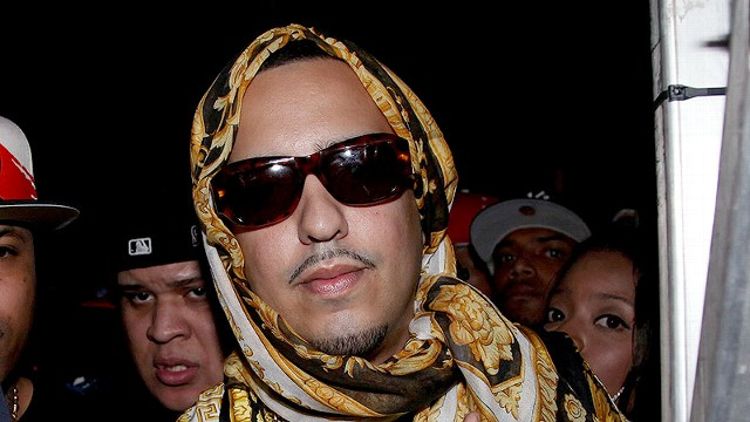 On the surface, rapper French Montana and his Bad Boy Records boss Diddy don’t seem to have much in common. The former has a gritty exterior and discusses cocaine less as a drug and more as a lifestyle, while the latter has a habit of glistening and reminding us how he has all the money. One of the ways in which they are extremely similar, however, is their skill at the art of knowing everyone and being everywhere. Diddy has made a career of always finding his way on-camera, onto a remix, or to the right party. His protégé, young grasshopper Montana, is a quick learner — in the past six months, he’s landed on the Drake-headlined Club Paradise Tour, and has become second only to 2Chainz as far as star-studded collaborations go, most notably the car-rattling, Vanessa Bryant–referencing anthem “Stay Schemin.'”

While landing a verse on that song was an accomplishment, perhaps more impressive is what French did on accident, that being the invention of a word. That word: “fanute.” Due to a hard-to-decipher drawl, his opening lyric “From the hoopty coupe, to that Ghost dawwwg” was interpreted by a significant chunk of the listening population as “Fanute the coupe.” Was “fanute” a word in 2011? No. Has it, somehow, taken on a life of its own, loosely defined as anything from “switch out” to “accumulate funds” to literally anything you want? Absolutely.

Fanute is French’s “fetch.” But on accident, which makes it that much cooler. As I walked to have a chat with French in his midtown Manhattan hotel room, this accidental addition to the slang lexicon was the only thing I could think about and was eager to steer the conversation in that direction.

So, first off, French, I’m a fan of your sleeve situation right now. Do you even know … what is that?

It’s kinda dope, right. It’s a mink tee. I have these YSL sneakers, they cost me like 1,000 dollars, but I couldn’t find anything to go with them, so I called my homeboy that does tees and was like “Yo, make me like a lion mink-sleeve T.” Oh, the sneakers is right here (shows sneakers; they do, in fact, match). But yeah, they came out dope.

So this will be the third time I’ve seen you, with the prior two times being quite memorable, the Maybach Music Press Conference and Summer Jam. Both times, you received nice hometown New York welcomes, but at Summer Jam I was honestly worried for you. You came on after Nas and Lauryn Hill and I didn’t know how the crowd would react. How did that happen?

First of all, it was so much going backstage, I didn’t even know I was coming out. And then next thing I know, I heard, “This next artist needs no introduction.” So I’m thinking, “Who’s coming out, Jay-Z?” Then they was like, “French Montana,” and I heard my song come on. I was backstage talking to someone and was like, “Oh shit, I gotta be onstage.” I ran onstage with no mic and just threw my hands up. My boy finally got me a mic, and we did “Everything’s a Go,” I brought out Wale for the remix to “Slight Work,” and then I knew I had to bring Mase out, which I knew was going to be a special moment.

I kind of lost it when that happened.

Yeah, you know Mase came out with that two-step.

At a concert like Summer Jam, it’s very apparent the amount of overlap in hip-hop, especially in the different rap crews, from the YMCMB people to Maybach to GOOD Music, etc. I’ve been interested by you because you seem to float between all of them and don’t seem to have much beef with anyone. How have you managed to pull that off?

I think I was blessed to go through all my beef early. I came from, like, a long history of drama. [Laughter from French’s entire team in the room.] I feel like I’m at a point where I’m just trying to get to the money. The people I work with are the people I meet in life, so it’s not like I’m just working with anybody. There’s a lot of people I could be working with that I’m not working with. I just feel like Ross is my brother, me and Birdman are really cool, and Drake, I’m on tour with him. I’m affiliated with all the people I like working with, so it’s just working out for the best.

So the new song. “Pop That.” It sounds like a throwback Miami bass strip club jam.

That’s the feeling I got when I heard the beat.

This is a big moment for you, this song, because the song’s other big names (Drake, Lil Wayne, Rick Ross) are hopping on your song, not the other way around. How important is that for you?

It’s kinda big. My boy Chinx Drugz had the beat, so as soon as I heard it, I was like, “Who gave you this beat?” I knew I had to get it out of his hands, then I took it from him and played it for Ross. Then Ross tried to take it out of my hands, so I didn’t even call Ross back for two weeks. Then I played it for Khaled, he tried to take it, so I was like, “I got to stop playing this for people.” Finally, I put it together, Ross was the last one to do his verse, and Wayne I sent it to him and he sent it back to me the same day, two hours after. We didn’t even have a relationship at the time, but he just did it. Drake was in Europe somewhere, I sent it to him, he set up a studio in his hotel room and was like, “I can’t miss out.” It was nice, because it’s my first big single and people known I’ve been grinding for so long, so it was good that people wanted to be involved in that.

Tell me about being on this Club Paradise tour. It’s some of everything with regard to different demographics of hip-hop.

For me, I’d never been on an actual big tour before, and I never knew the power of a tour, what it could do, so it’s crazy to see how people swap fans. How after this tour, I’ma have 100,000 to 200,000 Drake fans. We (Waka Flocka Flame, Drake, J. Cole, 2Chainz, Meek Mill) are all friends on this tour, we all chill together, we all make music together.

It’s dope. I was the first one out on that court, pulling people out, saying, “I bet you won’t get off that bus and get some of this.” Flocka came, then J. Cole came, and it was just a big celebrity 21.

You a basketball fan? Player?

Yeah, I used to play when I was young, but it didn’t pay my bills after a while.

So I had to switch my hustle.

So, probably my last question, what’s your take on fame? Do you enjoy what comes with it?

I’m scared of fame, but I’m in love with the money. I feel like the fame is something you can’t handle. There are certain people that can’t even go to the store. That’s kind of scary when you can’t go out nowhere. Life turns into something you don’t really want, even though you were asking for it the whole time.

How famous do you think you are right now?

I’m balanced out right now. I’m not like a Michael Jackson or anything, or even a Puff. You know, Puff got to stay in the palm trees.

Speaking of Diddy. He’s your boss. It’s been interesting watching the two of you interact. How is he as a mentor, as a peer, as a guy?

I don’t think people get to know the real Puff. I feel like a lot of people assume things from watching movies and reality shows, but he’s actually a real dude. That’s what got him here. He’s been doing it for so long, he’s got it down to a science, it’s natural to him. His biggest problem every day is probably just waking [up], being him. It takes a lot. Puff is Puff, that’s the best way you can say it.

Actual last question, which is me going back to the shirt.

I’m a little jealous, I can’t lie. I bring it up because you seem to be actually into fashion, more than just liking expensive stuff. You wear a lot of Versace. Is fashion a casual thing for you, or are you really into it? I think a lot of famous people claim to care about fashion, but don’t really know anything about it. As someone that, at times, wants to care about it, but has an account balance that prohibits him from acting on these cares, did your attention for it come once the means were there, or had it been there all along?

The love for cars, fashion, that whole lifestyle is what got me the hustle. Because if I didn’t have no love for that, I wouldn’t hustle, and would have no money. So it started from there, and then I got into new colors, new designers, learning about what’s new, what’s classic. And then after that, it was all about just getting it. I feel like over time I’ve realized people buy your music, but are also buying into you as a person. People want to know what your life is like. They see you performing in Versace, but as soon as you get off the stage, are you about to throw on some Fila sweatsuits or some Mountain Gears? That’s why Jay-Z is Jay-Z. Once you portray something, that’s how you should live.

You don’t think you should turn that persona off once the cameras are off?

Yeah, I forgot to ask him about “fanute.” Somehow, I think it’s better that way, because after chatting with him about fashion, Diddy, and basketball, I can’t imagine fanuting those 15 minutes for anything else.

Twitquistion: A Brave Media Member Is Forced to Answer for a Pro-Newsroom Tweet