Freak Show & Tell: Tori Spelling Does Not Kiss and Tell 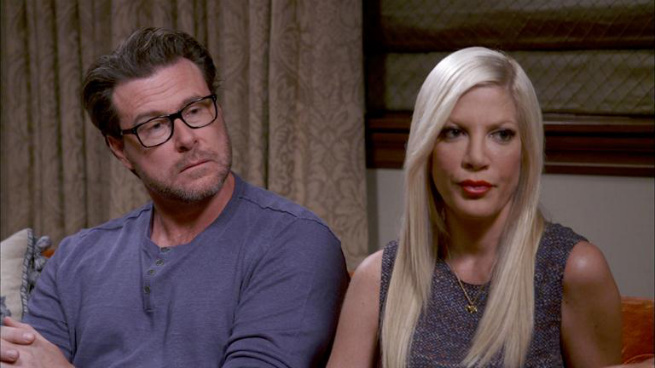 Who Is This Now? Tori.

Why Are We Watching Her? She’s discussing the first season of her reality show with her husband in a special “reunion” episode.

How Did She Get Here? In the True Tori season finale, Dean decided to leave for several weeks to host Chopped Canada. Supposedly, the first time Dean and Tori are seeing each other since this gig is on camera.

What’s the Grossest Thing We See? Host Brooke Anderson asks, essentially, whether Tori and Dean are sleeping together. About this, Tori acts coy? Girl, we know you took his cheating ass back, because (a) you’re hot for him, and (b) we’ve already heard all about how childbirth ruined your belly button and whatever the hell else. Just answer the question and quit acting like you’re too discreet to when WE ALL KNOW BETTER.

What Have We Learned? There is at least one line of personal disclosure that Tori Spelling won’t cross … but probably just the one.

Who Is This Now? Tracie.

Why Are We Watching Her? She’s trying to figure out what the deal is with a Twitter follower named Sammie and her friend Reese — the latter of whom, it seems, does not exist.

How Did She Get Here? Sammie got in with Tracie — an actor who was in the films Rent and Death Proof, among others — by lavishing her with praise for all of her projects and creating Tracie-promoting videos and memes.

What’s the Grossest Thing We See? Catfish hosts Nev and Max arrange a meeting for Tracie and a couple of other entertainment-industry people Sammie stanned for — Glee Project contestant Marissa and film producer Lotti. At the meeting, Marissa presents a love poem Sammie had written her, even though it doesn’t advance the investigation into Reese (an alter ego Sammie created and then killed off to get Tracie’s sympathy) at all and really just serves to humiliate Sammie, who is not just absent, but in another state and unable to defend herself.

What Have We Learned? This episode was a few minutes short, and Tracie should be more suspicious of fans even when they really kiss her ass.

Why Are We Watching Her? She’s working on her marriage to her husband, Clive.

How Did She Get Here? After costarring on Bad Girls Club, she’s continued to be a “bad girl” in her marriage, if by “bad girl” you mean “screaming monster.”

What’s the Grossest Thing We See? When the couple starts unpacking on the first day, Tanisha sees that Clive has done a poor job of packing his own suitcase and starts screaming at him so loudly that Ryan, another participant, comes into the room to ask them to stop fighting and physically threatening each other. When the boot camp directors finally step in to address the situation, Tanisha declares that Clive’s hearing impairment is a “burden” on their relationship.

Ask the Maester: The History of the Wall, Invasion Strategies, and Maester Aemon