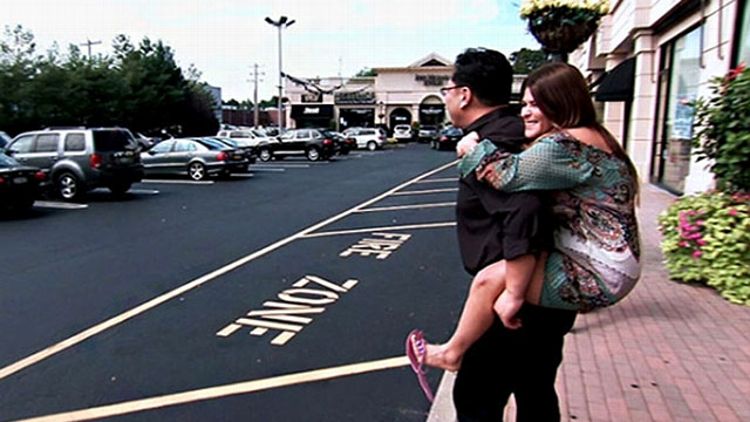 Why Are We Watching Her? We’re letting her show us how spoiled and ridiculous a 29-year-old woman can actually be.

How Did She Get Here? Bravo found her so she could star in its documentary about twentysomething women who live at home with their parents until they (theoretically, eventually) get married.

What’s the Grossest Thing We See? After getting a pedicure but not bringing in her high-heeled shoes, Ashlee has a minor freak-out that the salon doesn’t have any pedicure flip-flops with heels; Ashlee claims she “can’t” walk in flats. So she makes her dad, Hal, push her in a rolling chair to the reception area and, from there, somehow convinces a guy at the desk to give her a piggyback ride out to her car.

What Have We Learned? Never go to Long Island.

Who Is This Now? Amber.

Why Are We Watching Her? She’s having problems with her mother, Julie.

How Did She Get Here? Amber’s stepfather Don and Julie have been having problems blending their two families’ stepchildren since their wedding, so they’ve called on Jo “Supernanny” Frost to help sort out their issues.

What’s the Grossest Thing We See? After a night of partying so hard that Julie and Don suspected she was on drugs and took her to the ER (it was just alcohol, but a lot of it), Amber refuses to talk to Julie about the consequences of her actions. Pressed to listen to Julie’s attempts to improve their communication, Amber repeatedly says she hates Julie, stomps out of the room, stomps out of the house, and loses control of her emotions completely, finally dissolving into a full-on sobbing, screaming, toddler-style meltdown. Amber is 16.

What Have We Learned? Teenagers are some of the world’s worst people.

Who Is This Now? Dema.

Why Are We Watching Her? She’s confirming all the worst fears many employees have about what would happen if they were frank with their managers.

How Did She Get Here? In reaction to interpersonal problems at the company she founded and still runs, she agreed to let a group of her employees make high-level HR decisions, I guess because she didn’t feel like it.

What’s the Grossest Thing We See? Last week, the select employees participating in this grotesque farce chose three colleagues who would potentially be at risk. This week, those employees revealed to Dema who those three people are — and, most controversially, that one of them is Dema’s mother, Kout. Dema reacts badly, defending Kout’s high salary on the vague basis that she does lots of things the decision-making staffers didn’t know about. When only one employee, Lorraine, speaks up to explain why she nominated Kout (she typically doesn’t work a full day, she’s hard to get along with, she’s supposedly head of accounting yet uses not one but two outside accounting firms), Dema’s husband/company CEO Danoush commends Lorraine for being brave enough to defend her opinion. “Or stupid,” Lorraine cracks. Dema just nods, slowly and portentously. We eventually learn the staffers have decided to cut Kout’s pay by $20,000 a year (about a third of her salary). But in the “Three Months Later” update, Dema unapologetically declares that she didn’t do it. So if you’re not going to abide by the decisions the members of the group have made together, WHAT DID THEY ALL GO THROUGH THIS B.S. FOR?!

What Have We Learned? It’s fine to be extremely interested in getting on TV, but before you do it, give a few minutes of thought to how well you want to present yourself. Because Dema really didn’t.

Who Is This Now? Nicholas.

Why Are We Watching Him? He’s telling the story of a time a marine creature very nearly killed him.

How Did He Get Here? Well, first he decided to live in Australia. Then he waded into some shallow, murky water to play with his dogs, where he got bitten by a stonefish.

What’s the Grossest Thing We See? Because we don’t get any footage or photos of Nicholas’s injury, the grossest thing we see is B-roll of an actual stonefish, a creature whose evolutionary adaptations have made it seriously ugly. This is not a dude you’re going to want to put in your home aquarium.

What Have We Learned? The treatment Nicholas is given in the ER is a tub of hot water to rest his mangled foot in and some Panadol (Commonwealth for Tylenol), because morphine would make the poison worse. And I mean, if even Australia hasn’t devised proper painkillers to treat animal-on-human violence, never go to Australia.

Who Is This Now? Beau.

Why Are We Watching Him? He’s on a date with the beautiful and eligible Melissa, who happens to be pregnant.

How Did He Get Here? He went out with Melissa once, a while ago, before her pregnancy was showing. Now that she’s seven and a half months along, she presumably called him for a second date so the cameras could capture the unique challenges someone in her position must face.

What’s the Grossest Thing We See? Melissa asks Beau about a time he called her — on her birthday — and made a vague suggestion that they get together that night, but then never called her back to make an actual plan. (Why she was free on no notice on her birthday is not discussed, I suspect because she wasn’t actually free but that it makes a better setup if she pretends she was.) And though Melissa’s question is admittedly a bit of an ambush, Beau doesn’t exactly rise to the occasion with this verbatim answer: “Why do guys do that? I think, I mean, uh, I think probably in that moment, if I were to look back, probably what was occurring was, like, I’ll have a thought about what I want to do in my life and whether it be, like, with a woman or work or whatnot, and then five seconds later [finger-snap], oh, uh, it, it completely, it just, you know, something’s happening in my life, and then it’s a new direction. I don’t, I don’t do a lot of planning, so one moment I’ll be like, Oh, we gotta get together, we gotta, you know, we gotta connect. You know, intimacy and vulnerability, you know, you should have that with, with everyone you meet. You know, so when I met you, and I was like, Oh wow, you know there’s a, there’s a reason, right? And something kind of spoke to me, I’m like, You know what, it’s all, it’s all gonna work out. I just knew, somewhere in my mind, there was some aspect of being, you know, in kind of this cosmic dance that we were supposed to be doing. Like, have I — I don’t know if that answers your question, or …?”

What Have We Learned? Better to end up a single mother than raise a kid with an inept B.S. artist like this fool.

Who Is This Now? Kirsten.

Why Are We Watching Her? She’s entered into inpatient couples counseling with her husband, Seth.

How Did She Get Here? Kirsten was formerly profiled on the reality show Bridezillas, of which this series is a spinoff, because — and this may shock you — a handful of the couples who butted heads in the run-up to their weddings continue to have problems with one another after they’re married.

What’s the Grossest Thing We See? When she and Seth are the last ones to receive constructive criticism after an exercise all five couples have participated in, Kirsten orders the therapists not to be negative with her. Unfortunately, the first thing Dr. Carroll says is that Kirsten acts like a spoiled teenager, so she … storms out of the room and refuses to listen any longer.

What Have We Learned? If Bridezillas covered your wedding, you … shouldn’t have married that person.

Grading the Charts ... in DANCEHALL!