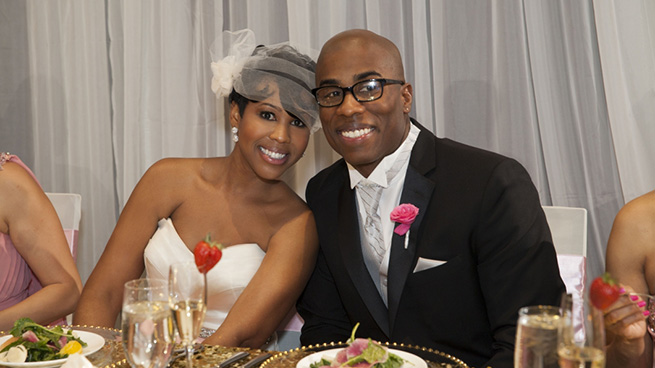 Why Are We Watching Him? He’s clashing with his new wife, Monet, about her failure to meet his expectations for her.

How Did He Get Here? For some reason, Vaughn and Monet decided to let a panel of “experts” choose spouses for them and to meet each other for the first time at the altar; since then, things have not gone smoothly.

What’s the Grossest Thing We See? Though Vaughn has technically moved in with Monet, his job sometimes requires him to be away overnight, so he hasn’t seen her much. When he does return home on this particular night, he learns that Monet has planned for some of her female friends to come over and hang out. Vaughn immediately gets angry at Monet for not having cleared the decks for his arrival. In an interview, he cites some of the huge sacrifices he has made for the sake of their relationship: “I’ve been swallowing all these different things — moving up here, a girl who doesn’t cook … ” Did I mention that since they live in New York, it’s very easy for him to acquire food by other means, many of which don’t require him to go outside?

What Have We Learned? Vaughn may have wanted a geisha more than a wife.

Why Are We Watching Him? He’s trying to dissuade his young son Isaac about a change Isaac wants to make in their living situation.

How Did He Get Here? For the past two years, Tyler and his wife, Wendy, have been living as nomads, without any permanent home, while they make their living as photographers and homeschool the kids.

What’s the Grossest Thing We See? Though Wendy and Tyler say one of their goals in living as nomads is to teach the kids not to be attached to possessions, the opposite seems to have resulted. They’ve instituted the rule that whenever a new toy comes into the car, an old one has to go, but since Wendy has started talking about how much more comfortable this lifestyle would be if they had a trailer instead of cramming everything into their SUV, Isaac has figured out that a trailer would ALSO mean more room for toys. So, in the way kids do, he has started “casually” bringing it up a lot, particularly in front of other people. But Tyler thinks buying a trailer would be the first step to going back to normal life and thus is opposed to the idea, and tells Isaac so: “Yeah, you’d like your own little space … I bet you would, buddy. We can put fake decorations in your fake trailer, how about that?”

What Have We Learned? Tyler caves to the trailer by the end of the episode, so he’s not as dumb a hippie as the rest of the episode makes him seem.

Why Are We Watching Her? She’s looking into revising some of the earlier cosmetic surgery procedures she’s been having since she was quite young.

How Did She Get Here? Kelly was born with a cleft palate and cleft lip, which required several surgeries to correct, imperfectly. She’s still unhappy with the look of her upper lip and nose.

What’s the Grossest Thing We See? Since Drs. Dubrow and Nassif don’t get a look at the surgeons’ notes from Kelly’s earlier operations, they don’t really know what to expect when they start their own surgery, and are kind of surprised to find a bit of nose cartilage inside Kelly’s lip, which I guess is not normal. The grossest thing we hear, however, is Kelly’s story of an earlier operation after which she had to have her jaw wired shut: “I had a liquid pain reliever that made me very sick, so vomiting with your mouth wired shut? Is not a pleasant experience.”

What Have We Learned? We should all try our best not to get our jaws wired shut.

Why Exactly Is There a ‘Jarhead 2’? Hollywood's Secret-Sequel Economy