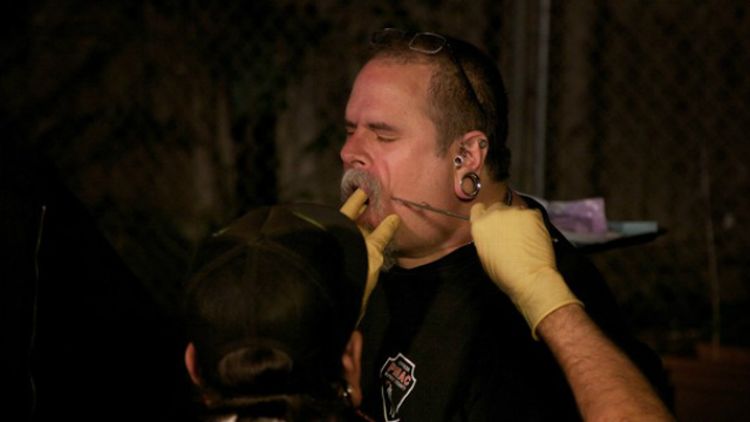 Who Is This Now? Jackie.
Why Are We Watching Her? She’s getting all up in her teenage son Michael’s girlfriend’s business.
How Did She Get Here? Michael had the great judgment to get arrested and go to rehab just in time for his girlfriend, Kim, to have their baby.
What’s the Grossest Thing We See? In Michael’s absence, Jackie is trying to go over to Kim’s parents’ house and see the baby on a daily basis, with no sense of how intrusive this is in a household with two newborns (Kim’s mom, Kristi, was pregnant at the same time Kim was). And when Jackie throws a baby shower, she takes it upon herself to commandeer Liam from Kim and pass him around to each one of her relatives, many of whom Kim seems never even to have met before.
What Have We Learned? Some grandmothers need to be told to step off, because they will never figure it out.

Who Is This Now? Josh.
Why Are We Watching Him? He’s undergoing an extreme, though apparently temporary, body modification.
How Did He Get Here? He’s a member of the Church Of Body Modification, a real thing.
What’s the Grossest Thing We See? WARNING: UPSETTING. Here’s how Josh has decided to spend the afternoon: He gets large-gauge needles stuck through both legs below the knees and just under his crotch, in three pairs of piercings on his torso, and through the middle of his forehead. Then large hooks are inserted into all of those piercings. Then nylon ropes are looped through the hooks. And then, as the tension on the ropes gradually increases, Josh is hoisted into the air and swung around — his entire body weight, remember, being supported by hooks through just the top layer of his flesh.
What Have We Learned? In San Diego, this is apparently something you can do in a public park in the middle of the day, so let’s never go there.

Who Is This Now? Miranda.
Why Are We Watching Her? She’s throwing a dinner party for her gigantic family.
How Did She Get Here? I’m reading between the lines, but I think she wanted to show off her perfect life to her relatives.
What’s the Grossest Thing We See? Some tiny crumbs of a chocolate cake get on Miranda’s white tablecloth. First, she demands to know who spilled food on the tablecloth as though this were an unprecedented event; then, after everyone leaves, she tells her husband, Chris, that it’s ruined and she’s going to have to throw it out.
What Have We Learned? Don’t buy the kind of tablecloth that can’t withstand food being spilled on it like stupid Miranda did.

The full episode is here.

Who Is This Now? Byron.
Why Are We Watching Him? He’s wasting everyone’s time in marriage-counseling boot camp.
How Did He Get Here? His wife, Porsha, suspected him of cheating, which turned out to be true.
What’s the Grossest Thing We See? In an interview in which Porsha once again brings up Byron’s contentious cell phone, about which he is extremely secretive, he finally agrees to let her see it … except he’s taken the battery out.
What Have We Learned? Byron is the worst.