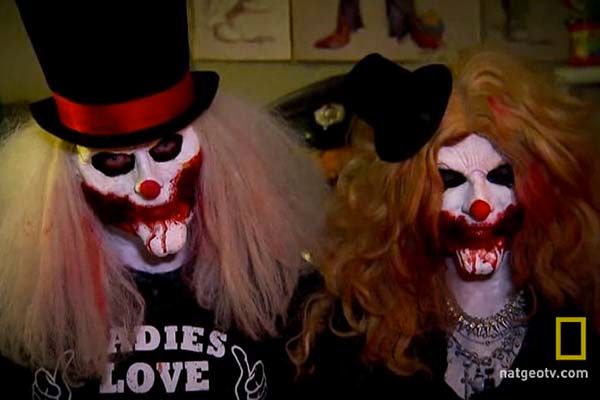 Who Is This Now? “Shivers” and “Quivers.”

Why Are We Watching Them? They are clowns that their “humanoid” alter egos, Zoe and Willy, have kept secret even from their best friends.

How Did They Get Here? Originally, Zoe thought of dressing as a clown for Halloween because she was scared of clowns as a kid. She and Willy liked it so much that they decided to keep dressing in clown drag in their spare time.

What’s the Grossest Thing We See? Shivers’s and Quivers’s clown makeup features thick, gory blood around their mouths, which is … gross. But Shivers also notes that she and Quivers are trying to figure out how to take over Zoe and Willy’s lives 24/7, and that Zoe and Willy have expressed their willingness to get facial surgery — permanent nose and chin prosthetics — to permanently alter their faces to conform to Shivers’s and Quivers’s lumpen facial features.

What Have We Learned? Next time you tell someone to “get a hobby,” consider that the hobby someone may get is … this.

Why Are We Watching Her? She’s accompanying her daughter Shaniyah to a meeting with Shaniyah’s therapist, Veronica.

How Did She Get Here? Shaniyah, age 14, is pregnant, and is having a hard time coming to terms with the realities of her situation.

What’s the Grossest Thing We See? At Veronica’s urging, Lemhele joins Shaniyah for her appointment, and makes faces to herself as Shaniyah expresses her disbelief that babies’ big heads can come out of “women’s vaggies.” When Veronica asks Lemhele what she feels when Shaniyah talks about how “weird” her pregnancy is, Lemhele sanctimoniously reiterates what’s been her position all along: It’s too bad for Shaniyah that she got pregnant so young and that she doesn’t have positive feelings about it. Lemhele badgers Shaniyah about talking to Veronica and getting her feelings out, whereupon Shaniyah starts sobbing — pretty much the first show of emotion we’ve seen from her. Lemhele rolls her eyes at Veronica, sighing, “Now she’s gonna cry. See?” Lemhele doesn’t do anything to comfort Shaniyah, and directs so many “You see what I’m dealing with?”–type remarks to Veronica that Veronica has to tell her to “stop talking.”

What Have We Learned? Lemhele is among the world’s worst mothers.

Who Is This Now? Nicole B.

Why Are We Watching Her? She’s cutting loose in Miami.

How Did She Get Here? She’s one of a group of nouveau riche frenemies in Atlanta, one of whom happens to have a second home in Miami to which she’s invited everyone for a girls’ weekend.

What’s the Grossest Thing We See? Nicole B. tells what she clearly thinks is a charming story about a time she got drunk, saw a little person at a bar, and decided to pick him up and dance with him and carry him around as though he were a baby. Also, Nicole B.’s extremely fake boobs (which she claims are real).

What Have We Learned? The Countess was right: Money can’t buy you class.

Who Is This Now? Byron.

Why Are We Watching Him? He’s participating in a marriage counselling program with his wife, Porsha.

How Did He Get Here? Her suspicions about secrets he may be keeping from her have become an issue in their marriage.

What’s the Grossest Thing We See? In the last episode, Byron passed out and had to be hospitalized after suffering a severe anxiety attack during one of their therapeutic exercises. In this episode, Byron returns, and confirms Boot Camp director Jim Carroll’s suspicion that Byron broke down due to the pressure of keeping his shameful secret: He’s been cheating on Porsha. Jim brings Porsha in to hear Byron’s confession that he’s cheated on her with anywhere from two to six other women. Jim notes that Byron is smirking as he talks to Porsha, and she very generously says that this is what Byron’s face does when he’s nervous. Porsha asks him several times whether he’s been unfaithful to her because she’s overweight, and he says that’s not it. Porsha manages to keep her equilibrium out of concern for Byron’s health, given his recent hospitalization. But whatever warm feelings the viewer may have for this couple and the strength of their union despite adversity is shattered when, as soon as Jim leaves, Byron is short with Porsha and curtly refuses to do the one thing she’s wanted him to do since the first episode: let her see his cell phone (which she thinks — apparently correctly — is full of incriminating messages to and from other women).

What Have We Learned? Like all the former Bridezillas on the show, Porsha is kind of a nightmare … but she deserves better than a dog like Byron.

Who Is This Now? Erica.

Why Are We Watching Her? She’s making excuses for blowing off work.

How Did She Get Here? She lives on Long Island and, despite her own insistence that it’s important to her to establish herself as a woman in business, she hasn’t ventured further in her career than working (apparently sporadically) for her father.

What’s the Grossest Thing We See? Erica’s father comes into her room on his way out to the office, to see if she’s planning to do any work today. She’s vague, whining about how tired she is and then telling the camera in a confessional that she can’t really be bothered to make herself go to work during the summer. Even when Erica’s father basically tells her it’s fine if she doesn’t work, but that she should give him some notice so that she doesn’t leave him in the lurch, she still won’t say whether she plans to come to the office.

What Have We Learned? In general, I am pretty appalled by this show’s stars’ attitude that they don’t really have to have careers because they’re all just waiting to marry some dudes who will support them, but that may actually be Erica’s best bet in life.

Handicapping The Bachelorette: Is This Over?