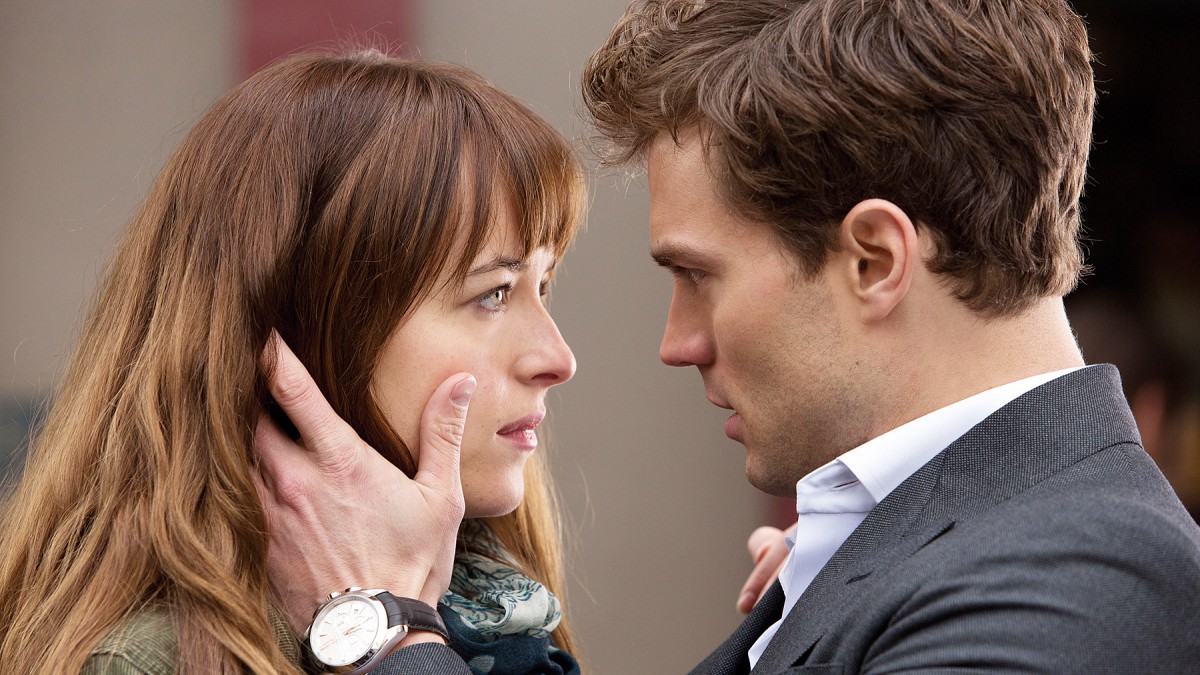 “Do you trust me?” asks Christian Grey (Jamie Dornan), the titular billionaire bore in Fifty Shades of Grey, after he’s twice made love to Anastasia Steele (Dakota Johnson), the college senior who shows up in his Seattle skyscraper for a newspaper interview and eventually stays for a spanking. Should we trust this guy? By this point, he has shown her his S&M parlor, liberated her from virginity, and celebrated by sitting alone at his piano and playing Beethoven. This is the 16th woman to be offered an exclusive to his penis, and apparently the first to find the contract that comes with it a little fishy. (Her: “What do I get out of this?” Him: “Me.”)

The contract isn’t all that’s binding. Anastasia is baby-stepped into Christian’s private world of treating bondage and pain as pleasure. What danger there is in this scenario feels accidental. Dornan is an Irishman and former fashion model who comports himself here with the kind of stiff American masculinity that, presumably, is meant to connote arousal. Christian’s chest is dotted with burns, and you’re in constant suspicion that they’ve been caused by faulty circuitry beneath his skin. When he drops in on Anastasia at the hardware store where she works, looking for cable ties, it’s not wrong to presume they’re for his own wiring. Christian is a sex machine, all right — if that machine also happens to be the Terminator.

Fifty Shades of Grey is based on the first book in a 2012 trilogy by E.L. James that hoped to connect old-fashioned romance and point-blank eroticism: Sense and Fuckability. The series began as self-published fan fiction based on the Twilight vampire books, which pitted lust against chastity. Fan fiction tends to double as an ardently wishful critique of its source material. Here, the wish was for the sex to happen much sooner and last way longer — and what if the vampire happened to be a young businessman raised by a family friend to be a domineering lover? (Everlasting kinkiness is the equivalent of the vampire curse.) Any movie based on James’s books holds an advantage over the Twilight films, since it doesn’t need to involve the onslaught of computer-generated sequences and world-building nonsense and invented jargon. Fifty Shades is ultimately just a girl, a guy, and his riding crop, and that should be enough.

But it’s not. In another life, James worked as a television executive. The episodic pacing and zinging dialogue of her books is better suited for TV, where most of the best life-size adventures now take place. Instead, there’s a galling presumption that running for two hours confers movie-ness upon it. The film doesn’t culminate in anything. It’s a bunch of scenes that end before any kind of satisfying conclusion. The fifty shades might be grey, but your balls are also blue.

The adaptation, credited to Kelly Marcel, empties itself of the book’s sublime ridiculousness. For instance, Christian still takes Anastasia up in a glider but omits the novel’s soft-core quasi-feminist camp of encouraging her to take the joystick. “‘Go on, Anastasia. Grab it,’ he urges more vehemently,” writes James in the book. “Oh shit. He’s going to make me fly the plane. No!” It’s diet Erica Jong: Fear of Gliding. “‘Come.’ He holds out his hand for me,” James writes, “and I clamber out of the cockpit.” In the movie, there’s no mention of the plane’s joystick, which means Anastasia has no opportunity to put her hands on it.

As a book, Fifty Shades of Grey doesn’t go on long enough to be a chore. Unlike Stephenie Meyer’s Twilight books, there’s no torture in the breathless writing. The prose is purple the way a plum is, not the way a face is from lack of air. Fifty Shades can be appreciated simultaneously as romantic fantasy and a mockery of it, with very little need to distinguish between the two. It’s simple, but there’s psychology lurking in its simplicity. This isn’t to say that James, in this first book, explores psychology. She’s rather reckless with it, but the recklessness is absurdly readable. Both of her characters come from broken yet stable homes. Anastasia has seen a revolving door of stepfathers. Christian is an orphan whose adoptive mother is a renowned doctor. Anastasia doesn’t like to be tied up and whipped. Christian claims he doesn’t like her lovingly touching him. Both are forms of bondage. In the book’s fantasy, Christian’s perverse damage needs true love to be healed (not, it appears, a shrink), and Anastasia is the woman who can bestow it upon him, curing him of his sexually deviant nature. (This, by the way, is what you get when the premise of your series is somebody else’s series that was based on vampires, werewolves, and horny teenage girls.)

A movie studio would be foolish not to adapt any book that sat atop the best-seller lists for two years. Its success is foreordained. But a movie made from these books demands shamelessness. It needs Anastasia’s hand on the joystick. Instead, this one goes for something moral, clean, and almost tediously straight-faced. It’s true that we’re spared the werewolf-vampire gobbledygook — there are no Volturi to speak of. But it must also be said that there are no Volturi to speak of. There really is no movie.

There are sex scenes here and there. The director, Sam Taylor-Johnson, does everything she can to make them tasteful and fair, like she’s selling body spray or panties. Johnson goes topless. Dornan reveals a patch of pubic hair and makes a lot of his moves in sweatpants and jeans. The soundtrack is obvious: “I Put a Spell on You,” “Beast of Burden,” “I’m on Fire.” The bedroom scenes are polite appetizers for what Christian presumably hopes will be many evenings in his playroom. The plot chiefly orbits around the sex contract Christian has drawn up for Anastasia. It enumerates the ways in which she (the submissive) will obey him (the dominant). He will punish her and she will like it.

The hook of James’s book is Anastasia’s casual and exclamatory narration, in which she mentions Christian slipping into and pulling out of her, the talk of condoms and erections and oh. Mercifully, she doesn’t narrate the movie, but in losing her point of view, the movie loses the novel’s sense of ecstasy. Episodes of Friends have been more explicit. To that end, it’s far closer to your average romantic comedy than to a sex drama between a punisher and the punished. Christian keeps buying Anastasia stuff — a new computer, a new car, a very old first edition of Thomas Hardy’s tragedy Tess of the d’Urbervilles. He makes surprise appearances at events where he monitors her alcohol intake (“another margarita,” he texts once, in judgment). Possible Terminator. Definite personal trainer.

What obviously comes to mind is Pretty Woman, in which Richard Gere’s antisocial businessman decides to make Julia Roberts’s prostitute The One. Fifty Shades of Grey takes 125 minutes to do what that movie did in its first dozen or so scenes. It could use some of Gere’s seasoning. Dornan is fine — he’s willingly opaque, keeping the movie shallow by being hot and passive-aggressively available. These are the characters as James wrote them, and I can imagine the riots if a Richard Gere were to class up the joint with his emotional firewall. But, with onscreen S&M, you need to believe in the dom’s dominance.

Dornan is part of the way there. He looks like a guy you’d see in his own world at the gym or at a table in an expensive restaurant — a mystery. But the movie needs him to be boyish. I suppose that’s a crucial element of the fantasy — that, despite his alleged damage, Christian is hot and nice, that he isn’t dangerous, just robotically perfect.

Johnson’s mealy, girlish delivery doesn’t evoke Julia Roberts so much as Johnson’s own mother, Melanie Griffith. Griffith boarded the express train to a sort of movie stardom with a contract-negotiation scene in the most cockamamie of Brian De Palma’s cubist Hitchcock tributes, 1984’s Body Double. Griffith plays Holly Body, a platinum blonde porn actress propositioned by the wallowing actor she’s just done a scene with. He’s pretending to be an adult-film producer who wants to hire her, and Holly lays out her terms: “I do not do animal acts. I do not do S&M or any variations of that particular bent. No water sports, either. I will not shave my pussy. No fist fucking. And absolutely no coming in my face. I get $2,000 a day, and I do not work without a contract.”

Griffith is the daughter of Tippi Hedren. Presumably, De Palma hired Griffith for the opportunity to make explicit the sexual trauma and suppression in Hedren’s appearances in Hitchcock’s The Birds and Marnie. This is all to say that Johnson hails from complex erotic stock (her father is the randy TV star and recording artist Don Johnson), of which Fifty Shades of Grey only scratches the surface. What’s nice about the negotiation scene is how much Johnson evokes Griffith creating her own angles in Working Girl, in which Griffith’s screwball-dingbat delivery belied great reserves of self-confidence. No matter how much nudity — or near nudity — the movies wanted of her, and even when she was miscast (which she always seemed to be), that confidence remained the source of her sexiness. She was post–Born Yesterday Judy Holliday.1 In any case, it would be a relief to see Johnson, too, get something more declarative to do.

Anastasia is not only submissive in this movie, she’s also clueless. “What are butt plugs?” she asks. Dornan could have answered, “Have you seen The Story of O.?” Anyone who’s old enough to remember the old fear and hysteria caused by S&M movies like Luis Buñuel’s Belle du Jour and Tim Blake Nelson’s O and Adrian Lyne’s Nine 1/2 Weeks; or anyone who’s seen Bernardo Bertolucci’s Last Tango in Paris, Michael Haneke’s The Piano Teacher, and the trashily vicious Color of Night; or anyone who’s watched Maggie Gyllenhaal and James Spader in the imperfectly exciting Secretary, or watched Girls’s audacious second season or any year of Sex and the City is likely to leave Fifty Shades of Grey perplexed by its uncontroversial mildness.

What’s the big deal? The phenomenon of the book and now the movie is to S&M what Madonna was to vogueing — a catchy legitimization. Having somebody like Lyne direct these movies would obviously distort the nature of whose fantasy this is. But at least then he’d be giving you something whose adult-male impulses entertained even as they appalled. It feels as if Taylor-Johnson is consciously pushing back against men like Lyne, who made Fatal Attraction and Indecent Proposal and Unfaithful. But in pushing back, it also feels like she’s pushing down, like she’s suppressing.

In the film, Christian’s issues with sex aren’t treated like a problem at all, until they are — and the film falls into a visual trap of frivolity from which it can’t fully escape. Watching Christian whip a weeping Anastasia, my mind drifted to Michael Fassbender having Chiwetel Ejiofor do the same to Lupita Nyong’o in 12 Years a Slave. In Fifty Shades, the prevailing lightness toward the abuse in that moment is shocking, even as it sets up the drama for installment two. The movie seems scared of itself. Look at Anastasia’s back. There are no scars.

Clint’s Cause: The Case for ‘American Sniper’