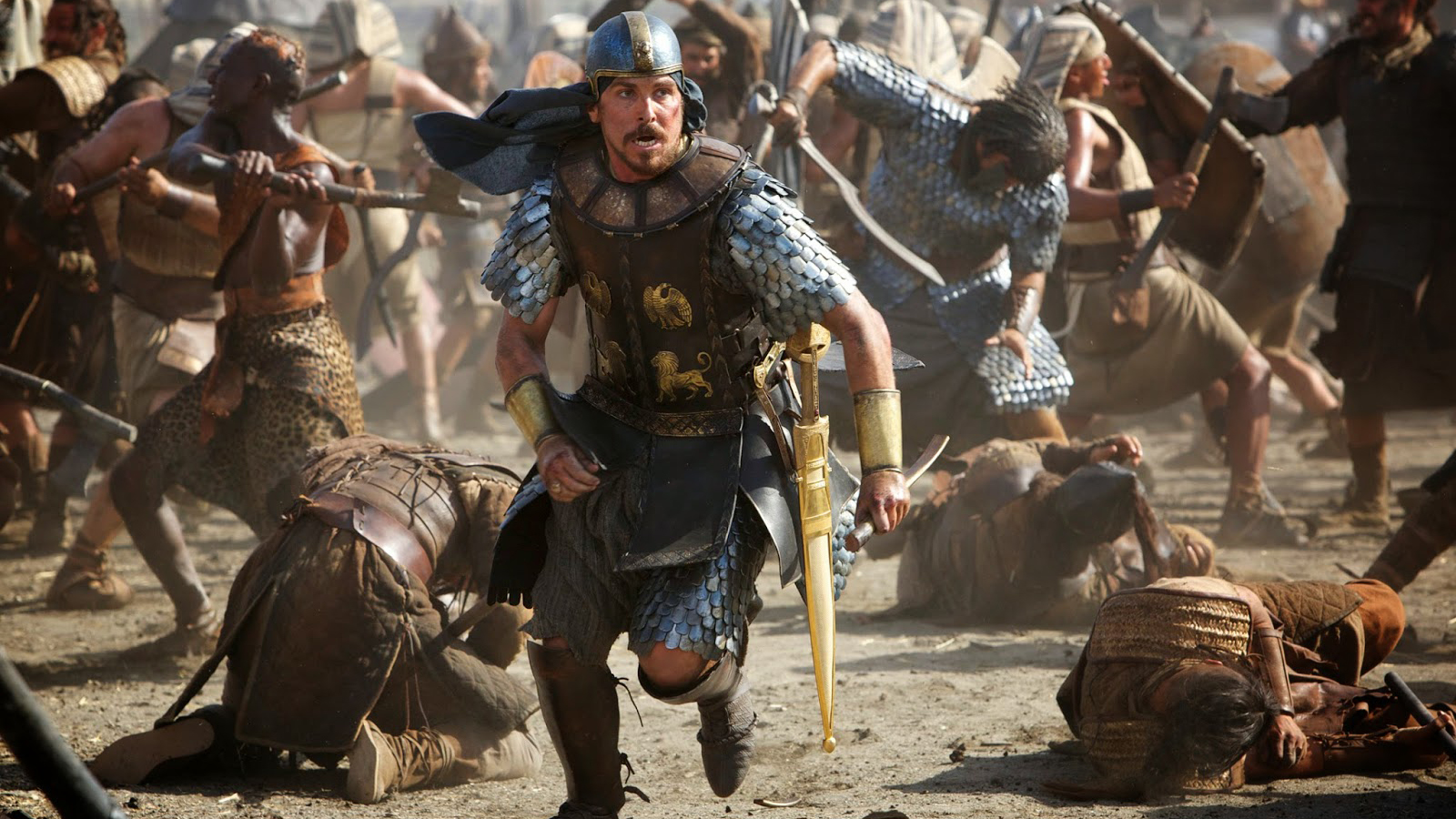 Someone spent more than $140 million on Exodus: Gods and Kings, Ridley Scott’s huge Hollywood Bible epic. The plot goes all the way to Egypt and the Middle East just to have bronzed actors swishing around as brown characters. Instead of Will Smith, Oscar Isaac, Rami Malek, or Omar Metwally — I could go on – the studio paid for two titles and a colon. But that’s cool. It’s only 2014 where we sit.

Word is, Scott’s enormous sets are real — columns, endless palaces, monuments, the whole shebang. He throws in an overcranked speeding-chariots sequence in which the chariots and the horses and the drivers all spill off the side of a cliff. And for the plague sequences, no expense was spared on locusts, crocodiles, flies, and boils. Joel Edgerton plays Ramses with intermittent Brando-esque-ness, like a detuned TV trying to broadcast The Wild One. Scott puts Edgerton in golden headdresses and eyeliner, so that he looks ridiculous and ridiculously hot. The cast also includes Ben Kingsley, John Turturro, and Ben Mendelsohn. Scott has even made Aaron Paul an oppressed Jew (Aaron Paul!). All of them let the props and costumes dictate their acting.

To play Moses, the film has roped in Christian Bale, which is sensible. He’d overcommit to overcommitment. Not here, though. He takes the Russell Crowe Thruway — scenic, classy, suffocatingly masculine — skipping the dozen or so exits that lead to Charlton Heston Boulevard. Bale’s Moses is exposed as someone other than the mighty general who has beaten back invading armies and saved Ramses’s life. He’s revealed to be … Jewish — and in a manner that brings Brokeback Mountain as close to Mt. Sinai as you could ever hope. While most of the men in this movie are doing Gods and Queens, Bale keeps his rod stiff.

Here, Ramses is Moses’s bratty, fratty, non-blood brother. He plays with enormous snakes. He’s terrible at battle and even worse at dynastic rule.

Some mix of anti-Semitism and fraternal rivalry comes so naturally to him that he boots Moses to the desert with nary a tear. Moses’s surrogate mother, Bithia (Hiam Abbass), does all the crying, seeing him off into exile and uttering his true name: Moishe. Moses is not alone for long. A tribe of Midianites takes him in, and he marries the first woman he sees. His bride, Zipporah (María Valverde), has a predictable hotness even when slaving over a hot loom. On their wedding night, after Moses has answered the sorts of questions a bride might want to ask before marrying a stranger, she offers sexual instruction: “Proceed.”

It probably felt like Scott was on to something with some of this, like he’d discovered camp. But that’s like Kiss saying they invented fire. Anyway, Scott don’t seem to know what do with campiness. For two or three nothing scenes, Sigourney Weaver arrives as Ramses’s bloodthirsty mother, Tuya, and you feel cheated. She’d look better in Edgerton’s jewelry than he does. Why not just cast her in all of these parts? Let her rule Egypt, free the Jews — anything she wants.

Mendelsohn and Turturro are giving us dinner theater, but when has rubber chicken ever been Ridley Scott’s thing? Joaquin Phoenix got to simper and swoop in Gladiator, but the movie had to make him its bitch, too. This movie has parallel concerns about macho, minimalist Moses standing up to Ramses’s blinged-out bully. That’s the showdown, sort of. But this movie gets away from Scott so fast and so thoroughly that it ceases to seem directed, especially after visions lure Moses away from his life as a father, husband, and shepherd. By “visions” I mean a glowing shrub and a little blond boy (Isaac Andrews) who comes to him after Moses gets whacked in the head during a rockslide. The kid petulantly explains that he’s looking for a general, more or less, to take out Ramses, and Moses heeds the call, setting out to build a Hebrew army. Officially, the boy’s an angel named Malak who merely represents the voice of God. But no one’s falling for that angel business, least of all Moses. This is God, and he looks pissed.

Having sat through this and Darren Aronofsky’s Noah, you appreciate literalist sleeping pills like Heaven Is for Real and Son of God. There’s no filmmaking in either of those, just an earnest attempt to represent faith rather than bury or undermine it the way Noah and Exodus do. Aronofsky was at least wrestling with what it meant to believe in God, but that struggle got bogged down in some kind of commercial science-fiction jail that Noah couldn’t think — or feel — its way out of. Exodus does something worse. It equates religious belief with military might, not as a critique but as a stance. All the film seems to understand of the Bible is bellicosity, which aligns conveniently with Scott’s priorities as a director. The movie is going for an angle, after all, and the angle is “defense contractors love the Old Testament, too.” The movie really gets off on the 10 plagues passages. Blood pools into lakes. Crocodiles chomp on fishermen. Edgerton’s beautiful face starts to bubble. Scott knows how to bring this kind of violence to life. But isn’t that some of the trouble with the world as it stands: the interpretation of Scripture as a moralist action movie?

The script is credited to four writers: Adam Cooper, Bill Collage, Jeffrey Caine, and Steven Zaillian. Some moviegoers will just call them the Four Plagues. The movie they’ve helped write lasts two and a half hours, and the last 45 minutes start to take on the desperate hustle of an infomercial. Stay for the chariots falling over the cliff and we’ll give you the parting of the Red Sea! Stay for that and in just 20 more minutes we’ll give you old-ass Moses tapping out text onto tablets!

But what this movie can’t give you is the corny elegance of a Cecil B. DeMille spectacular. Drudgery isn’t what draws us to Samson and Delilah or The Ten Commandments or any of DeMille’s pseudo-biblical productions. Wonder does. Those movies bleed camp. But DeMille wasn’t afraid simply to point a camera at the Bible and let a story fall out, either, just as the BBC did with a different stack of bibles, Jane Austen’s novels of manners. There are other ways to approach the Bible, like the Coens’ ongoing obsession with the Book of Job as a comedy. But as much as DeMille is out of fashion, he’s timeless, too. Whether it’s God or movies, we still want to believe. He happened to excel at exploiting faith in both.

Scott probably knows that Exodus was a bad idea. Not even the Red Sea — the object of The Ten Commandments’ high point — parts with any conviction. Surely he can see that turning the Burning Bush into a blob of Sterno was a mistake. So was representing the Almighty as a vindictive English snot. These aren’t plagues he unleashes so much as tantrums. This God doesn’t need a general. He needs a timeout. Anyway, Moses wasn’t a general. He was, like, Moses. Things are already starting to look down in the opening scenes. When the useless palace soothsayer looks at her stomach-turning instruments of prognostication, one of the royals asks, “What do the entrails say?” You just have to shake your head. What do most entrails say? “We’re full of shit.”