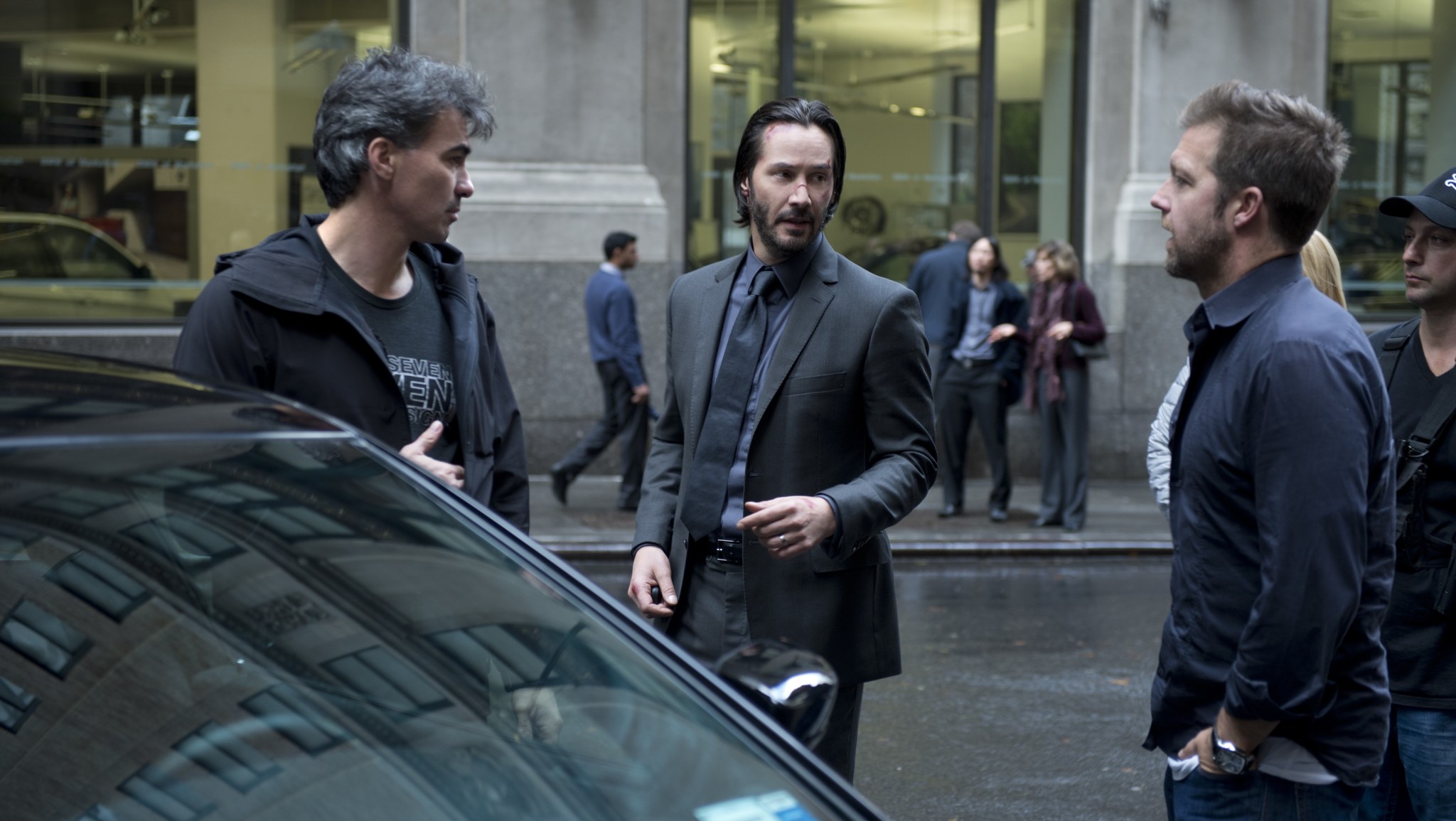 Hiring veteran stuntmen Chad Stahelski and David Leitch to direct a Keanu Reeves–led gun-fu movie is like using a fire hose to wash your car. Home Depot insists the garden variety will suffice, but where’s the fun in standard pressure? Excessive force can be sublime. There are directors who would competently complete an action vehicle like John Wick, and then there are Stahelski and Leitch, who spend their days off set sparring with jujitsu. Hey, Steven Spielberg: When was the last time you fought James Cameron with two Japanese tantos?

John Wick — the tale of an ex-assassin (Reeves) seeking revenge on the mobsters who killed his dog — marks Stahelski and Leitch’s first co-directing credit. That’s getting technical. According to the duo, they’ve been directing since making the jump from stuntmen to action designers — directing actors (who punch), directing showdowns (with gunplay), and directing explosive finales (that explode). John Wick is the ultimate stunt, a two-hour action extravaganza.

The two started as stunt doubles in the trenches: Stahelski doubled for his friend Brandon Lee after the actor’s fatal accident on The Crow and performed Reeves’s fight work on The Matrix. Leitch doubled extensively for Brad Pitt on films like Fight Club, Mr. & Mrs. Smith, and Troy. As part of the same stunt clique, they endured nearly 20 years of high falls, car crashes, and rear scissor chokes to become two of Hollywood’s premier second-unit directors (i.e., set piece wizards) and founders of 87Eleven Action Design, the Los Angeles–based training facility/stunt laboratory. If the new Bourne movie demands claustrophobic fisticuffs, a production brings on 87Eleven to map it out. If The Hunger Games or Jurassic World needs to meld practical stunts with CG embellishment, they do that too. If a fresh-faced Juilliard grad is asked to throw a punch, Hollywood sends him or her to Stahelski and Leitch. At 87Eleven, actors aren’t taught choreography; they’re broken and rebuilt as martial artists.

Talking to Stahelski and Leitch is like stepping into one of their blockbuster fight scenes. No one gets hurt — they’re professionals — but the memories fly like punches. Stahelski and Leitch possess a shared consciousness, capable of quick-to-act problem-solving. This comes in handy when the two seasoned fighters (both students of the legendary Guro Dan Inosanto) come at each other with swords. It’s a filmmaking skill, too: When they’re directing a movie, Stahelski might cue “Action!” while Leitch yells “Cut!” In a New York City hotel on a rainy Saturday afternoon, the directing duo’s banter is like two fighters, staccato-punching their way from beat to beat.

Leitch: We do have different skills, I’m sure, but we’ve been together so long that …

Leitch: We have a flow. He starts, I finish. I start, he finishes. We have a common vision when we go in, but we have different methodologies to get there. Sometimes we have to battle those things out. At the end, we’re like two brothers working together.

John Wick is a nuanced shoot-’em-up leaning hard on sporadic bursts of character and Reeves’s fury. The beautiful thing about the fire hose: It still cleans the car. While speaking to Stahelski and Leitch about their black-and-blue résumés, our conversation naturally gravitated toward John Wick’s key stunts.

John Wick didn’t start with Stahelski and Leitch. Looking for “innovative” action, Reeves and producer Basil Iwanyk (The Town) knocked at 87Eleven’s door for design help. Enough pitching landed them the directing gig. Reeves fell for Stahelski and Leitch’s take, a response to everything happening — or not happening — in action today.

Leitch: There’s a hole in the action market for this kind of movie. Still rated R so the action can be provocative. It’s got swagger. A visual style that’s a throwback. ’60s and ’70s influences …

Stahelski and Leitch describe John Wick‘s first major set piece in terms of character. Before his dog is slaughtered, John Wick is a man grieving over the loss of his wife. When mobsters come back to finish the job, they find the retired assassin armed and dangerous. A scan of 87Eleven’s YouTube page, a video archive of proto-action scenes, illustrates that Wick’s punching-rolling-kicking-shooting technique is the Stahelski and Leitch style pushed to the extreme. But the directors still see the frenzy as a tonal ignition. “John’s switch,” they call it.

The codirectors say Reeves was willing to undergo 87Eleven’s most intense training regiments. Stahelski and Leitch were blunt with their star: John Wick would not involve kung fu, kickboxing, jump spin hook kicks, wirework, or anything he’d done before. He would learn judo, Japanese jujitsu, and Brazilian jiu-jitsu from “some of the toughest guys we’ve ever met.” For the initial shootout, the John Wick production team built out the interior of an existing house to 87Eleven’s specifications, creating a realistic obstacle course for their game of cat and mouse.

Leitch: We showed him a little tape of what we wanted him to do …

Stahelski: He gave us that look like, ‘Guys …’ It was going to suck.

The film’s keystone shootout is a neo-noir splash page gleaming with saturating lights and trance music. What starts as a pursuit of an organized crime prince (played by Game of Thrones’s Alfie Allen) through a nightclub blisters as Wick encounters formidable Russian henchmen. With blood squids a-poppin’, the sequence drifts from realistic stakes to comic-book extravagance, all thanks to the way Wick fights and the location fights back.

“We’ve seen the action movies that are super-serious, life or death, and you’ve seen the Bond films — from Roger Moore to Sean Connery to Timothy Dalton to now, super Nolan-ized versions,” Stahelski said. “It’s always, ‘Is it too cheesy? Too [self-referential]?’ We took it seriously but gave it the opportunity to laugh.”

Stahelski and Leitch have been in every kind of action movie. They first met on Perfect Target, a 1997 direct-to-video action movie that reteamed Stahelski with his Bloodsport 2 costar Daniel Bernhardt.1 Partnering with the Wachowskis, they orchestrated The Matrix trilogy’s escalating sci-fi mayhem. Leitch doubled Trey Parker on Orgazmo (“The purple plether bondage suit was amazing,” he recalled.). Preparation is key, no matter the scale of the movie. Stahelski and Leitch spend three to six months prepping their fighters. If all goes right, the on-set experience can become improvisational.

Leitch: You need bodies, you need your team, you need to get into a location and experiment …

Stahelski: The lowest level of stunt is martial arts, when you teach the actor five moves. Bad guy five moves, good guy five moves, bad guy does these two, good guy does these two, stunt doubles do the top shot. You’re not training, you’re just giving them the moves. Whatever their ability is on the day, that’s their ability. We try and take someone for three to six months and make you a martial arts stuntman so it can look believable.

Leitch: Choreographing a fight scene is telling a little story. You learn a lot about the characters involved.

Stahelski: John doesn’t want to punch you in the nose, he wants to shoot you in the head. His empty hands would do the same thing.

Stahelski said there is continued difficulty in reinventing set pieces of the past, especially an action beat like a hotel room brawl. Understanding the situation is often the easiest solution. How would a smaller female assassin grapple with the brutish John Wick? Sneak up on him, then put him in a chokehold, of course. It helps that, at this point, Wick is recovering from a gunshot wound. “Keanu wanted to be incredibly vulnerable. He insisted that he be in boxer shorts. Not many lead actors want to be without their cool pants. He wanted to be vulnerable to make it seem more believable that a woman could give John Wick a run for his money,” Stahelski said.

According to Leitch, costumers on The Matrix sequels styled Reeves in dress shoes unfit for the martial arts scene he was about to perform. “I’m like, ‘Do you want them to put rubber soles on the bottoms? Because you’re slipping around.’ He’s like, ‘No. This is what the costume designer has designed and I want to be true to what the artist wants.’” Leitch didn’t argue. “He really wants to hold true to the people he collaborates with. He’s a vessel for the collective character.”

Suffering for the Art

In an era of green screen and safety wires, what can hurt a stuntman?

For a scene in Fight Club, Leitch, standing in for Pitt, threw Ed Norton’s stunt double down a flight of stairs. Or, rather, both of Norton’s stunt doubles. They required two, because David Fincher wanted multiple takes and falling down stairs really fucking hurts. They did five takes with the first double and three with the second. “Later, I saw Fincher — he came by a set — and I asked him what take they used,” Leitch said. “Take two.”

There are no stair falls in John Wick, but a character does get hit by a car. “Getting hit by a car is getting hit by a car,” Stahelski said. But don’t mistake the codirectors for purists beholden to the golden age of stunts. They’re not trying to kill people. Every resource is on the table. A scene where the mob cuts Wick’s machine-gun spray with a well-timed SUV collision is a mash-up of several elements. There’s a version with Reeves in place, a stunt double variation, and visual effects splicing it all together. The payoff requires the months of work at 87Eleven before the cameras even roll, to give the physicality an extra oomph.

Stahelski: Stuntmen in general are more experienced and smarter about the way they do things. It’s more about the illusion than the male ego of, “I’m going to jump off this and see what happens.”

Leitch: We know we can hit a guy with a car at 12 miles per hour. Just get up on that hood. “We did it!” And then we’re going again.