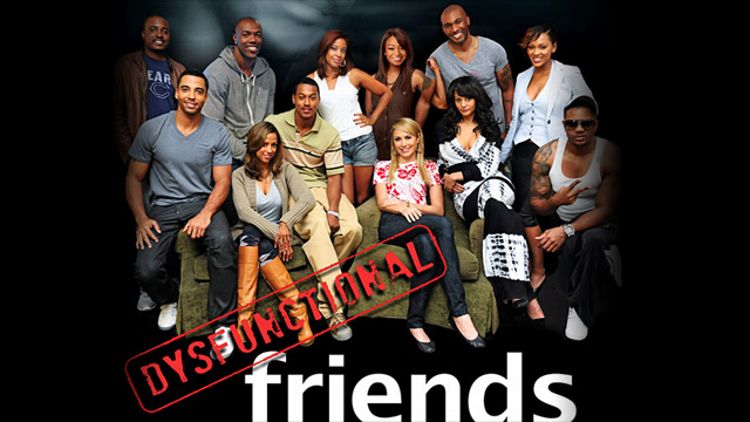 Terrell Owens is in a movie. The movie is called Dysfunctional Friends. Before we critique Terrell’s acting prowess, a few important facts about the film.

Jozen Cummings: After their very wealthy friend dies unexpectedly, a formerly tight-knit group of college buddies reunite at the funeral, only to learn each of them are entitled to a piece of the fortune. The one catch: They must spend five days together in their fallen friend’s house. With the exception of Stacy Keibler, all of the friends are Black, thus making it too easy to jokingly title this movie Big Brotha.

Rembert Browne: I had no idea this was the plot. I’ve got to do better.

Cummings: For fans of actors who are either currently BET-famous or were famous back in the ’90s, check out this dream team of an ensemble cast: Stacey Dash (Clueless!), Reagan Gomez-Preston (The Parent ‘Hood!), Jason Weaver (Drumline! ATL!), Wesley Jonathan (City Guys!!), Tatyana Ali (The Fresh Prince of Bel-Air!), Hosea Chanchez (The Game!), Persia White (Girlfriends!), Meagan Good (Cousin Skeeter!), Stacy Keibler (WWE!), and the man who has given us the reason to write this article today, Terrell Owens (The T.O. Show!).

Browne: The fact that you didn’t bring up Smart Guy when discussing all things “Jason Weaver” is upsetting to me.

The Theater Where It Was Showing

Cummings: The film opened in theaters this past weekend under the AMC Independent umbrella, which means if it is playing in a theater near you, it’s given one screen. At the showing I went to early Saturday evening, opening weekend, there were just as many people in the theater as there were people at Terrell Owens’ last workout.

Browne: My viewing, in the same theater the following day, started off with seven people, but ended with five. There really is nothing like getting in a good push-up/sit-up/wind sprint set right in the aisle, midmovie.

Cummings: If ever there were a role written with Owens in mind, it’s his role as Jackson, the fiancé of Lisa (played by Dash). Jackson is a professional basketball journeyman who gets traded from Miami to Toronto and, before even dribbling a ball in Canada, then gets traded to Milwaukee. Switch out basketball for football, and you get a classic case of art imitating life.

Browne: Wow, I didn’t even think of that. Then again, I thought the plot of the movie was a documentary about thirtysomething Black actors who were currently in the witness protection program. So yeah. Wow.

Now that you’re caught up about what happened in the movie, let’s give Terrell Owens’ big screen debut a film-room-like analysis based on the eight-variable scale we all know and love:

1. Placement on the Movie Poster

Cummings: Notice Terrell’s unassuming, heather-gray hoodie, accompanied with the smile, and the slight slouch in his posture? He’s just happy to be on the team, folks. No diva antics here. 7/10

Browne: You’ve got to respect that. I’m sure that humility is what really set him apart from Ochocinco and Michael Irvin during the three-person casting call. 7/10

Browne: I can’t tell if this was purposeful or not, but pairing T.O. with Stacey Dash, one of our worst actresses, truly makes him look like a veteran, even in this short trailer. 8/10

Cummings: It was no Dallas Cowboys press conference, but when it was time for T.O. to get in touch with his emotional side during a heated argument with Dash’s character, what he lacked in tears he made up for in veins bulging from his neck. 5/10

Browne: Roid-rage is actually an acting technique, in addition to simply just being a way of life for many a large-for-no-reason man. This isn’t a good thing. 3/10

Cummings: Throughout the movie, Jackson has his eyes on Storm (played by Keibler). When they run into each other jogging, T.O. turns on his charm, which is nothing like his turbo boost on Madden. These were without a doubt the most awkward scenes, like dialogue from an adult film, but just the dialogue. 4/10

Browne: The Owens/Kiebler interaction set back interracial dating 20 years. It’s that bad. 1/10 (would have been a 0/10 had he not gotten a kiss)

Cummings: Jackson has an ongoing beef with Aaron (played by Datari Turner) that dates back to their college days when they were roommates and Aaron dated Jackson’s fiancée. Things reach their boiling point when the two are in the weight room, taking shots at each other until T.O. says what just might be the line of the movie: “Your ex is doing jaw exercises on my balls.” The fact that there wasn’t a fight right after these words were said proves to me the film had a small budget and couldn’t afford to insure any of its actors. 9/10

Browne: Not to belabor a point, but with a straight face, Terrell Owens said, “Your ex is doing jaw exercises on my balls.” I don’t know what the current criteria are for Oscars these days, but I guarantee you Daniel Day-Lewis could not pull that off. That is, unless he was in character for nine months as Terrell Owens as Jackson in Dysfunctional Friends. 10/10

6. Performances With a Shirt

Cummings: There were so few scenes where T.O. was actually wearing a shirt; it’s tough to say if he actually can act with one on. 4/10

Browne: Shirts are too constricting for people our size, I applaud him for taking it off even when the role didn’t call for it. As for your query, no, he most definitely cannot act with one on. Not even close. 7/10

Cummings: I’m no Tony Horton, but T.O. couldn’t reenact a simple arm curl? He must have been making a rookie’s salary while filming this movie. What was the weight of that dumbbell he picked up? I’m guessing 25 pounds, definitely not heavier. He looked like he was filing his nails. 5/10

Browne: I, too, was surprised by this. Maybe there was a clause in other people’s contracts, explicitly saying that T.O. could only emasculate them but so much throughout the film. So, to make sure this was true, they gave Owens’ character a case of tennis elbow. Yeah, that’s probably what happened. Still disappointed, but at least we now know why. 4/10

Cummings: Will some team please pick this guy up next season? He can still run. 7/10

Browne: I second that. Dude is still a man-child boy-beast. 9/10

Cummings: Despite gorgeous women, Jason Weaver one-liners (someone get that man a show, again), and a semiretired athlete trying to show he can be the next Jim Brown, it still wasn’t enough to make Dysfunctional Friends a film worth sitting through. Although the “Introducing …” tag Owens was given in the opening credits (a touch that seems to be required for whenever athletes and rappers want to be taken seriously as actors) was awkward, Terrell Owens wasn’t the worst thing about this movie, nor was he worse than he was as a VH1 celebreality character. Hollywood, get the popcorn ready, put a bunch of other capable actors around him, and watch T.O. do his thing.

Browne: This was the perfect first role for T.O., because he outperformed some of his costars, who have spent their entire lives “acting.” Obviously, he doesn’t hold a candle to Jamal from City Guys, but that’s talent you can’t be taught. You’re born with Jamal from City Guys-esque talent. Anyway, if you have a free afternoon and can round up a bunch of friends, throw a party at a theater showing Dysfunctional Friends. I guarantee your group will make up 97 percent of the room and after the drinking game really gets underway, those last few people that were in the theater will either leave or join in on the fun.