Dumb and Dumber To Is Happening With Jim Carrey, Jeff Daniels, and Maybe the Blind Kid With the Dead Bird … 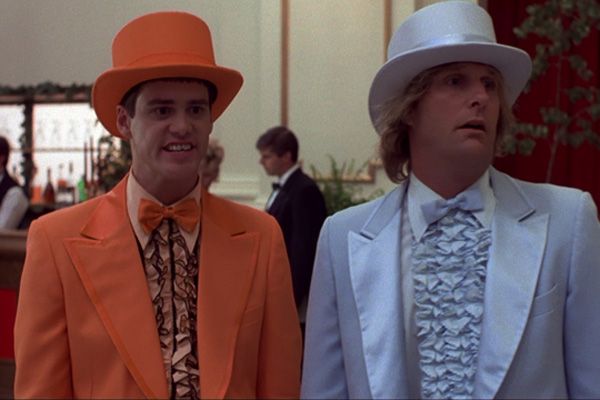 The long-rumored sequel to Dumb and Dumber has had its share of fortunes, good and bad. But now it’s as locked-in as it’s ever been. After Warner Bros. dropped its option on the project, Universal picked it up, and the Farrelly brothers are moving full steam ahead. In a Nerdist podcast posted Tuesday night, Peter Farrelly broke down some details.

Confirmed to return for the sequel includes: Jim Carrey, Jeff Daniels, and even Harland Williams who played the pee-drinking cop in the first film. Farrelly said that blind kid will return in the movie as a man, but this might have been a joke. The movie takes place in Rhode Island, but they plan to shoot the film in Atlanta Georgia for the state’s tax breaks. They hope to start shooting in August 2013. “As we speak I have guys on the ground [working] in Atlanta.” … Dumb and Dumber To will be released Summer 2014: “It will be exactly 20 years when it comes out,” said Farrelly. The original film was released on December 16th 1994.

Well, alrighty then. Now, the Farrellys and Carrey being on board isn’t all that surprising: Neither The Three Stooges nor The Incredible Burt Wonderstone managed much of anything. But Jeff Daniels? He’s down for this? I mean, the guy’s got the second season of his VERY IMPORTANT Aaron Sorkin joint The Newsroom out in July. So, if things go well, Will McAvoy will presumably continue saving the world from bad cable news with a third season out roughly in the summer of 2014. Which means we’ll get to see Daniels as a truth crusader and a guy who can realistically portray diarrhea onscreen in the very same season. I have no problem with it, of course. I’m just honestly surprised. Good for you, though, Jeff. Give the people what they want, man.