Disposable TV: ‘My Cat From Hell’ and Our Obsession With the Perfect Pet 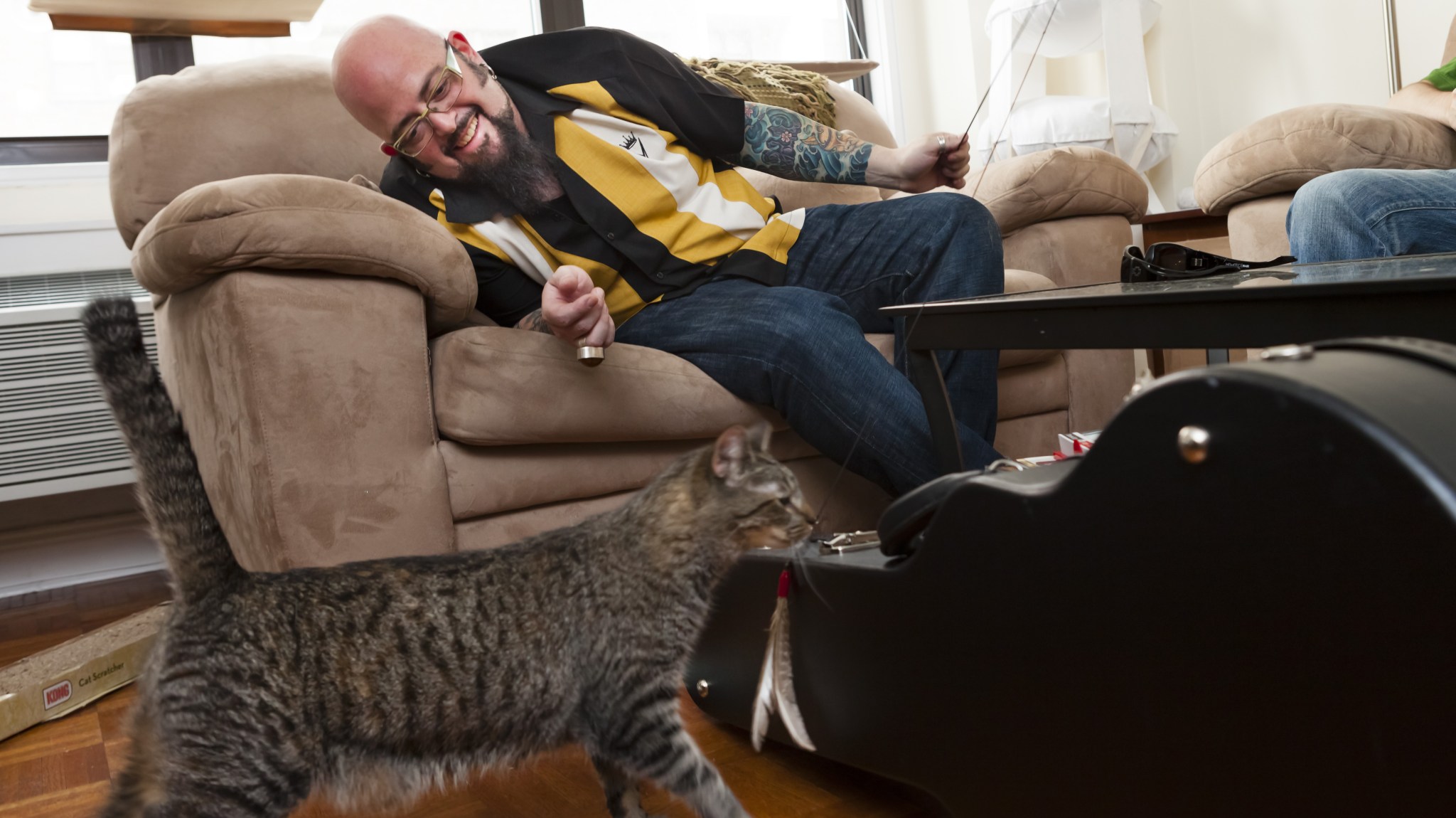 The only cat I ever lived with died. Not because of anything I did, mind you. I fed her, I played with her, I let her sit and watch Entourage with me. In short, I did everything a cat owner is supposed to do and I was comfortable knowing I was a good person. Sure, she ran aimlessly around my apartment, tore up my couch, scratched anything that got within 2 feet of her face, and generally seemed about as cheery as a Benjamin Netanyahu/Vladimir Putin buddy-cop comedy, but what was I supposed to do? We gave her to my girlfriend’s parents so she could “roam free.” She lasted another few years before she died of heart failure. What could I have done differently? Was I supposed to talk to her about her feelings? Was I supposed to give her a Scientology-style audit to help her through some sort of past-life trauma? If I ask a cat to tell me about its relationship with its mother, it’s not going to respond, no matter how artfully I set up the question. It’s a cat, and I did the best I could. I miss you, Madeline. See you at the crossroads.

I had made peace with myself and my role in Madeline’s early demise years ago, but Animal Planet’s My Cat From Hell made me think that maybe I’m a bad person. I could have done more. I should have spent more time exploring my cat’s feelings rather than my own. Jackson Galaxy, the human cartoon “musician by night and cat behaviorist by day” who hosts this feline assistance hour, wants people to stop seeing their cats as antagonists and start empathizing with their plight.

Ignoring the fact that he drives a pink convertible, wears more rings than The Mandarin from Iron Man 3, sports facial hair that looks painted on by a 3-year-old wearing a blindfold, and is named “Jackson Galaxy,” I have to say he has a point. Often, people get house pets like cats and dogs because they want to commune with a creature who will love them unconditionally that lacks those pesky “opinions” and “emotional needs” that other human beings have. No cat is going to spend 45 minutes a day complaining about their coworkers or the amount of traffic on the freeway. There are downsides to this arrangement that aren’t always taken into consideration, though. Cats can be territorial, defensive, paranoid, and violent. Granted, you could say that about Cleveland Cavaliers center Kendrick Perkins, but I’m not about to let him roam around my living room, eat my food, and lick my face, either.

The responsibility of caring for another living thing can be a burden, but the Internet is flooded with images of the ideal pet kissing babies, catching tennis balls, and playfully leaping into lakes. I searched for “cat” on YouTube as research for this article,1 and my computer froze from the sheer weight of cuteness that was about to rain down on me.

Look at those perfect little creatures! Can you believe that this cat is real?! You could not manufacture a cuter animal if you tried, and I’m sure some Island of Dr. Moreau lunatic has. BuzzFeed’s “17 Extremely Helpful Cats” article paints the picture of the model pet that is nothing but a joy to be around. There are just as many BuzzFeed articles about the dark side of cats, too, but that binary between the saintly kitty and the mischievous devil cat is what Jackson Galaxy is trying to dispel with his show. Inside every bad cat is a little angel just waiting to escape, and maybe we’re the ones that are the problem.

In the first half of last week’s Season 7 premiere, former America’s Next Top Model winner Adrianne Curry offered up her cat, Billy Shears, for the patented Jackson Galaxy Cat Mojo treatment. Curry and her boyfriend lovingly refer to their pet as “Asshole Fuckface Cat of America” on Twitter. Do you think Jackson’s first note is to stop verbally abusing the cat? Actually, it’s like his third or fourth note. In addition to advising them against calling their cat names, he suggests that they create a Twitter account for Billy so that they can “speak in his voice.” I’m trying to ignore the insanity of thinking a cat has a voice and just empathize with this poor creature, I really am. “There is no way Billy Shears would refer to himself as ‘Asshole Fuckface,'” he states with complete authority.

“He’ll take a turd and smear it everywhere,” Curry says. Could it be that Billy Shears is just trying to return the favor after you smeared shit all over his reputation on the Internet? “It sounds to me that Billy playing with his poop is plain, simple boredom,” Galaxy explains. “Cats need to play a lot.” Lesson no. 1: If you get a cat prone to passive-aggressive shit-smearing, he or she just needs more attention.

The other problem area is Todd, Curry’s live-in boyfriend. It seems that he has a habit of taunting and teasing Billy Shears on video. These people are literally cyber-bullying their cat. Thank god Jackson Galaxy is here to offer soothing words of wisdom that border on the creepy: “It sounds to me like you’re on different pages when it comes to the subject of co-parenting this cat.” Billy Shears already has parents, Jackson! They’re also cats. I sort of understand his point, though. Pets are not living memes or fully interactive GIFs. They require just as much attention as people do, but doesn’t that defeat the purpose of getting a pet? Other than not having to send it to college, what’s the difference between a cat and a baby? I guess you can’t use a spray bottle to reprimand a baby. “Hunt, catch, kill, eat is an end goal,” according to Galaxy. Also different from a baby.

By the end of the segment, Adrianne is playing with Billy and giving him an outlet for his “raw cat energy.” Todd has learned to stop feeding him old rotisserie chicken at 2 a.m. and throwing him around like a sack of wet clothes at the beach. They’re even calling him by his name and tweeting “in his voice.” With a straight face, Mr. Galaxy asks, “Has he stopped playing with his poop as well?” He has. Billy Shears is now a fully “mojofied cat.”

After watching all of this tedious effort being expended to have an animal in the house, I’m positive I screwed up with Madeline and also really sure I never want to have a pet again. Cats need love and hours of attention, but so do I. I don’t think I can pry myself away from my iPad long enough to live with an animal. I’d rather watch Entourage alone than have to pretend like I know what a cat is thinking.

Why You Should Be Watching ‘CSI: Cyber,’ the Best-Worst Show on Television